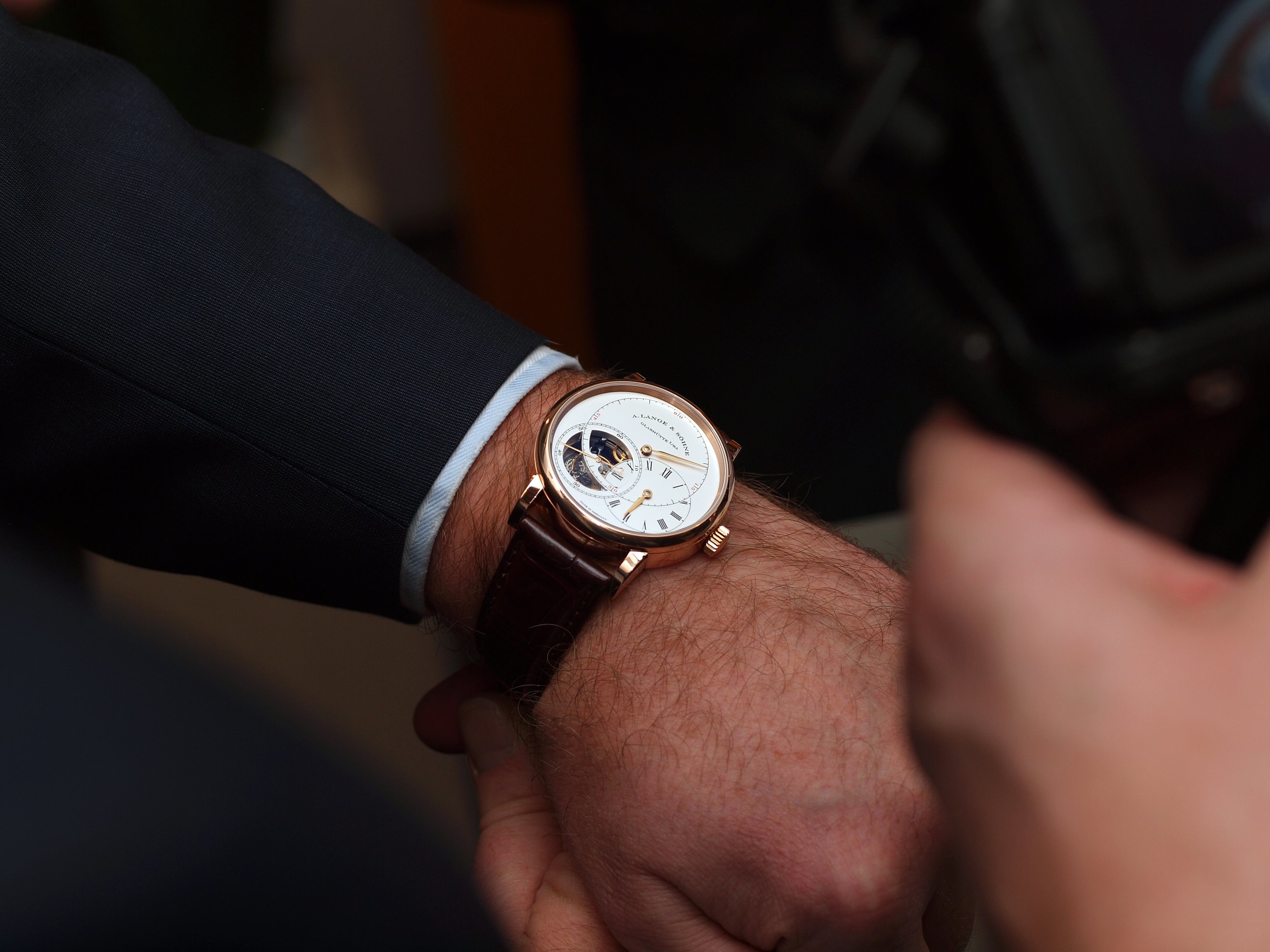 This is only the fourth A. Lange & Söhne model to be given the distinguished title “Pour le Mérite.” It features a fusée-and-chain transmission (which only a few watch manufactures are even capable of producing) as well as a tourbillon with a patented stop second mechanism.

Both complications, which are rarely seen together in the same timepiece, share the same goal, to improve rate stability and precision. A regulator dial further distinguishes the newest member of the Richard Lange family.

The dial configuration originates from precision regulators that were used since the 18th century, for calibration of timekeeping services and observatories, and even manufactures for synchronizing new watches. To prevent confusion of the hour and minute hands, especially under less than ideal light conditions, they were positioned on different axes of the dial.

Another very unique feature of this timepiece is a pivoting dial segment that fills in a portion of the opening to the tourbillon cage between 6 o’clock to 12 o’clock. A round cut-out in the seconds dial, traversed by the minute scale and by the recessed tourbillon bridge, reveals the tourbillon cage. The tourbillon can only be admired, though, from 12 to 6 o’clock, because at 6 o’clock, a dial segment with Roman numerals (VIII, IX and X) instantaneously pivots into the aperture to make the hour scale complete.

The pivoting action is activated by a switching mechanism, which assures that the dial segment is advanced by 90 degrees in increments of six hours. At 12 o’clock, the hours dial segment vanishes, instantaneously, and exposes the tourbillon for the next six hours, as it revolves.

The tourbillon features a patented stop second that allows you to halt its rotation, by just pulling the crown, which allows you to set the watch with one-second accuracy. This is very important for a watch that’s heritage is based on observatory chronometers, which must be able to be set very accurately, to properly take full advantage of the movement’s superb accuracy.

Powering this excellent timepiece is A. Lange & Söhne in-house caliber L072.1, which is a manually wound mechanical movement, with a fusée-and- chain transmission that has mostly been assembled and decorated by hand; as well a precision-adjusted in five positions. It features a three-quarter plate made of untreated German silver (like all Lange timepieces) and a fourth-wheel bridge engraved by hand. The movement has 351 parts without the chain (chain consists of 636 parts), 32 jewels (of which one is a diamond endstone), and 3 screwed gold chatons.

The oscillation system features a shock resistant Glucydur screw balance, a superior quality Lange balance spring manufactured in-house (something only a handful of manufactures are capable of doing), and an operating frequency of 21,600 semi-oscillations per hour. Power-reserve is 36 hours.

The functions of the watch include hours, minutes, subsidiary seconds, one-minute tourbillon with patented stop-seconds, and a pivoting dial segment. The crown is used for winding the watch and setting the time.

Historically, tourbillons were used for chronometric reasons (to increase the accuracy of a timepiece), however, in recent years the use of a tourbillon mechanism by most companies, has been primarily for aesthetics. In this case, though, the Richard Lange Tourbillon “Pour le Mérite” pays homage to the tourbillon’s original purpose, increased accuracy.

The pink gold model, Ref 760.032, is not a limited edition and features a solid silver ( argente) dial, pink gold hands, with a blued seconds hand. It comes with a hand-stitched crocodile strap (red-brown colored), and a Lange deployant buckle in solid pink gold.

The platinum model, Ref. 760.025, is limited to 100 pieces and features a solid silver (rhodium) dial, rhodium gold hands, and blued seconds hand. It comes with a hand-stitched crocodile strap (black colored), and a Lange deployant buckle in solid platinum.