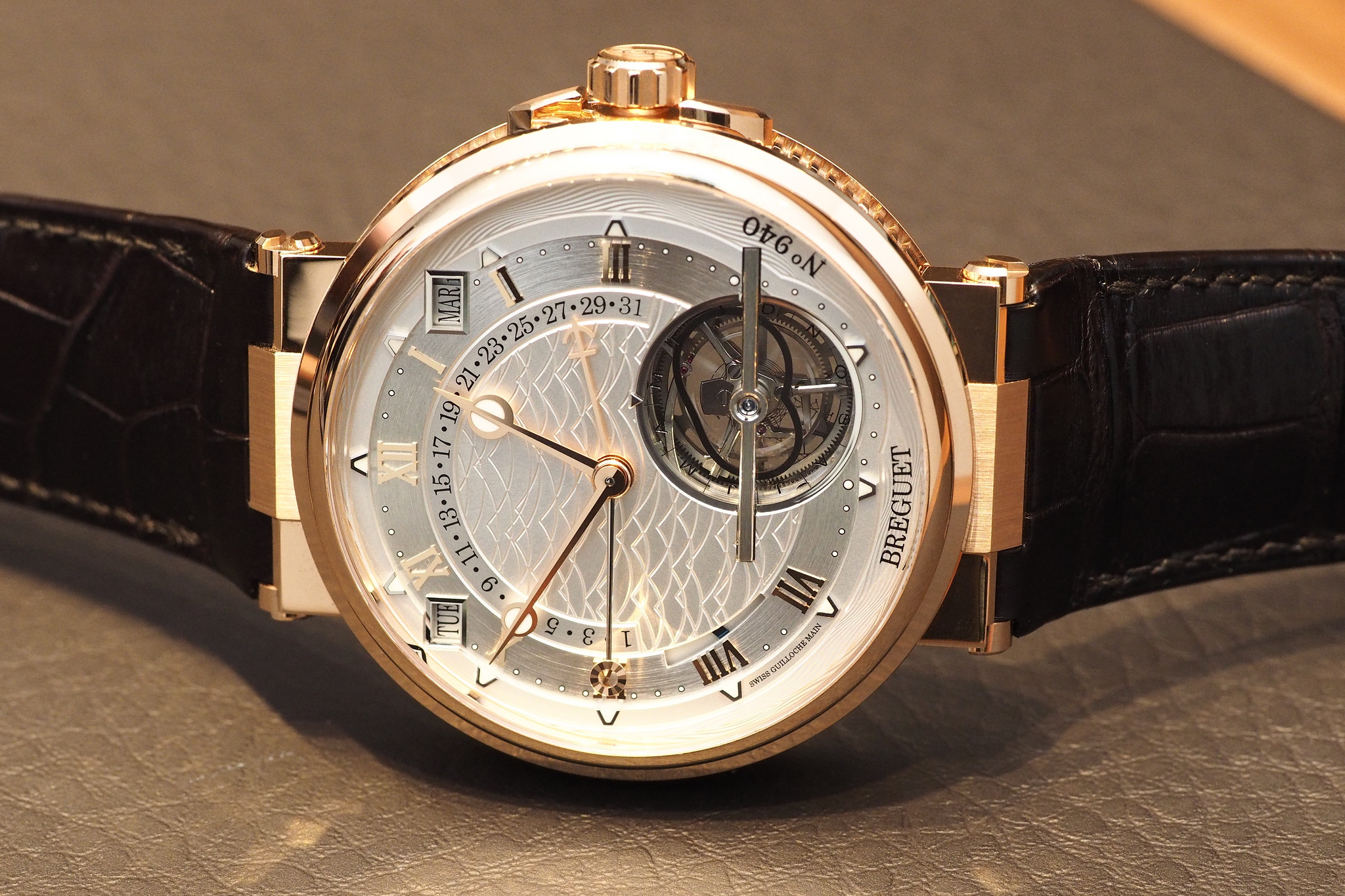 Breguet has a well-deserved position at the highest end of the watch industry. The reputation is based on an incredible history in watchmaking, starting with one of the greatest watchmakers of all-time – Abraham-Louis Breguet over two centuries ago – and continuing to this day. Moreover, the legendary Swiss watch company has continued to show their ability to design and manufacture highly collectible haut de gamme horological complications that few other watchmakers are capable of producing.

At Baselworld 2017, Breguet has further solidified their status with the debut of the Marine Équation Marchante 5887, which elegantly presents the difference between mean solar time (civil/standard time) and true solar time (the actual solar time), using two-minute hands.

Despite the visual simplicity of the dial, it is the utter complexity of what is underneath the dial that is the true testament to the high level of watchmaking that is happening at Breguet.

Since ancient times, the sun has been used as the basis of time. The visible motion of the sun – the “true solar time” indicated on sundials – is uneven, resulting in a discrepancy between the civil time of minus 16 minutes to plus 14 minutes. On four days a year, the two times are exactly the same. Whereas “mean solar time” (civil time) divides each day into exact 24-hour periods, which is more logical and so with the advent of precision timekeeping, watches and clocks eventually became the basis of time. This led to mean solar time to replace true solar time.

This brings us to the equation of time watchmaking complication.

According to Breguet, “Given that the sun’s various positions in the sky are reproduced in an identical manner on the same dates, watchmakers can “program” them by means of a special cam. The latter is shaped like a figure 8 and mechanically reproduces the path of the sun’s successive positions, called an analemma curve. Requiring extremely accurate execution, the cam is coupled with a feeler-spindle that drives an equation lever serving to indicate the difference between civil time and solar time (-16 to +14 minutes). This read-off is generally provided on a sector or subdial. It is then up to the user to mentally add or subtract the difference displayed in relation to mean time in order to calculate true solar time. The new Marine Équation Marchante from Breguet supersedes this principle. It simultaneously indicates the civil time and true time by means of two separate minutes hands. The running solar hand, adorned with a faceted golden sun, provides a direct reading of solar time minutes that is both quicker and more user-friendly. This apparent simplicity conceals an arduous construction process that few watchmakers are capable of achieving. The solar minute’s hand has to meet two imperative demands: it must sweep in a conventional way around the dial, like the civil minute’s hand, while also daily moving away from the latter by a distance that varies in accordance with the analemma curve, in order to display the equation. Breguet was able to accomplish this by equipping its running solar hand with a differential gear powered by two rotation sources operating entirely independently: the rotation of civil minutes, and that controlled by the lever in contact with the equation of time cam, which makes one full turn per year. Breguet has developed an extremely slim equation cam borne by a transparent sapphire disc also serving to correct the equation of time by the month.”

In addition, the timepiece features a full perpetual calendar. A rectangular aperture in between 10 and 11 o’clock displays the day, and another aperture between 1 and 2 o’clock displays the month, as well as the leap-year cycle. The date appears in a retrograde display in the central chapter ring that is indicated by a dedicated anchor-motif-tipped gold hand.

The Marine Équation Marchante 5887 is powered by manufacture caliber 581DR, which also has a third high complication: a 60-second tourbillon with a titanium carriage housing a Breguet balance with a silicon balance spring. Notably, the small seconds and equation of time cam are on the tourbillon axis.

The 57 jewel automatic movement oscillates at 4Hz and has an 80-hour power reserve, indicated by a display between 7 and 9 o’clock.

Naturally, as this is Breguet, the front dial features two types of engine-turning, including a “wave” pattern specifically developed for this new creation.

The inscription “Marine royale” is engraved on the tourbillon bar, whose execution naturally draws the gaze. Visible through a sapphire caseback, the bridges have been delicately chased to depict in meticulous detail the Royal Louis, a first rank vessel in the French Royal Navy.

On the back, through the sapphire crystal, you can see the mainspring barrel which adorned with a wind rose motif, in reference to astronomical navigation. You can also see the chamfered and polished edges of the bridges, which contrast against the bridges which have a mixture of hand engravings and satin brushings.

Ingeniously, there is a peripheral winding rotor, which provides an unobstructed view of the movement decoration and mechanics, akin to the view you see with a manually wound caliber and much like the oscillating weight design in the Carl F. Bucherer timepiece, we reviewed here.

The 43.9 mm case is crafted in either platinum or 18K rose gold with distinctive central lugs (to which the straps are directly fastened to with screws) combining polished and satin-brushed surfaces, open fluting, and visible flanks. The crown is topped with a polished “B” against a sandblasted background, as well as being adorned with a chamfered and satin-brushed wave motif.

The rose gold version with a silvered dial and an anthracite movement and the platinum version has a blue dial and rhodium-plated movement.

Abraham-Louis Breguet, the watchmaker, developed a small watch showing the equation of time in 1793, and so considering the provenance, it’s no surprise that the modern company Breguet, carries on the legacy.