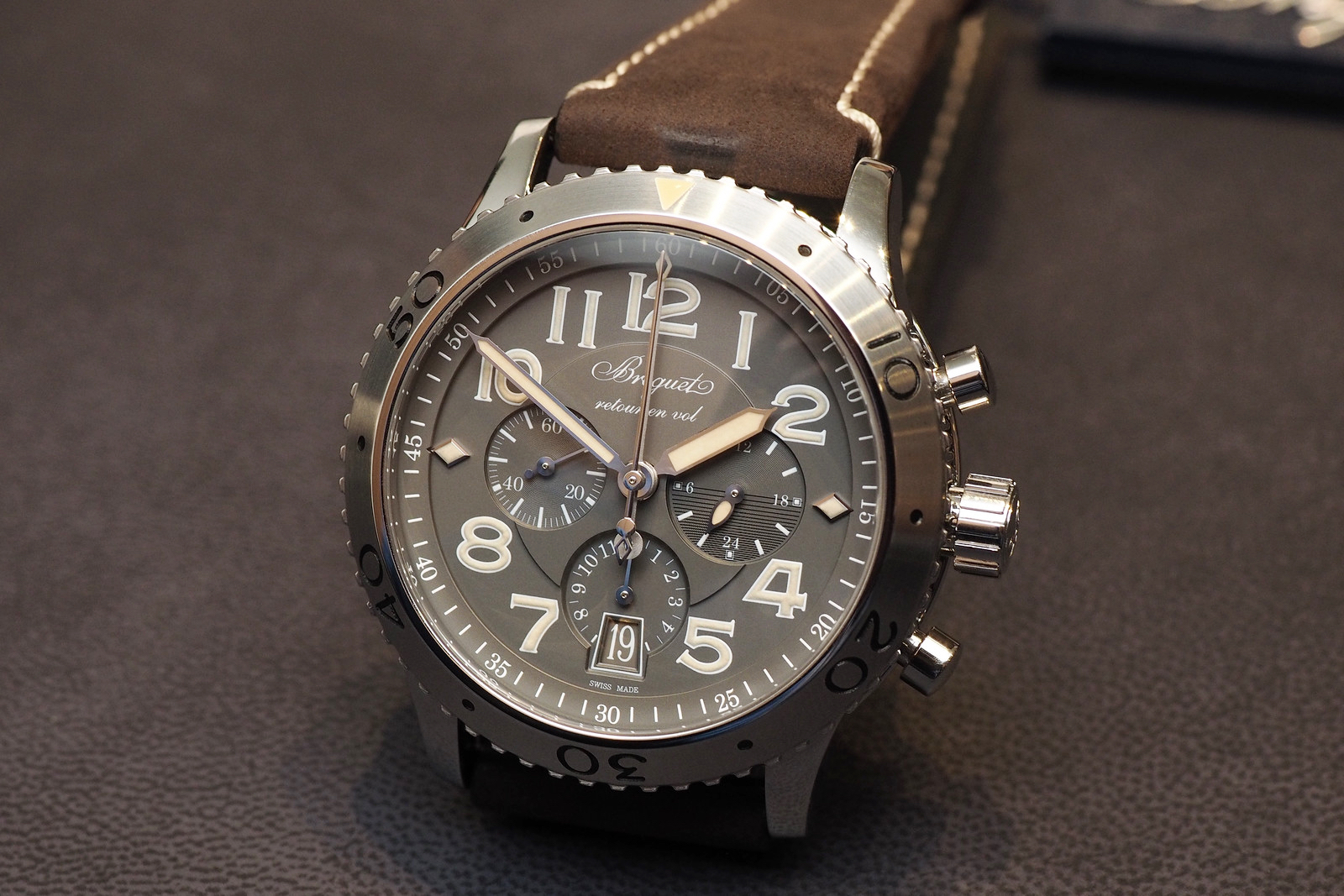 Abraham-Louis Breguet is well known for inventing the tourbillon, amongst many other watchmaking technologies.

Less known, however, is that his great-great-grandson, Louis Charles Breguet, carried on his family’s history of innovation, in not just watchmaking, but also in aviation.

Louis Charles Breguet developed the gyroplane, the forerunner of the helicopter. He also developed the Breguet XIV plane in 1916. And according to Breguet, “between 1917 and 1926, around 8,000 of these legendary aircraft were acquired by an estimated fifteen countries. Other models followed, such as the Breguet 19, and later the Breguet Deux-Ponts (Double Deck).”

In 1935, Breguet developed their first wrist chronographs. By 1954, Breguet launched the Type XX model commissioned by the French armed forces. That pilot chronograph was eventually supplied to the French national air force and the naval air arm until the early 1980s.

This year, at Baselworld 2016, Breguet continues its aviation heritage with the launch of the new *Type XXI 3817* which is housed in a 42 mm stainless steel case, with a fluted caseband. The bezel is satin-brushed, and the case, pump pushers, and crown are polisher. There is also a luminescent triangle on the bezel at 12. The Type XXI 3817 has a bi-directional rotating bezel, a slightly domed sapphire crystal, and a screwed crown. The water resistance is rated down to 100 meters.

A slate grey dial features vintage-style cream-colored luminescent Arabic hour numerals and indices. The flyback-equipped chronograph features a central minute counter, as well as a central flyback second hand, and the is a 12-hour totalizer at 6 o’clock.

Additionally, at 3 o’clock is a 24-hour day/night indicator that is in sync with the main hour function. A continuous small seconds subdial sits at 9 o’clock. Central minute totalizer. Large baton-shaped hour and minute hands are filled with luminescent material, for excellent legibility at a glance, regardless of the amount of available light.

Underneath the dial is a Breguet’s in-house caliber 584Q/2 automatic movement. It has 26 jewels, an inverted in-line Swiss lever escapement with silicon pallets, and a silicon balance spring. The movement beats at 4Hz (28,800 vph) and has a 48-hour power reserve. Each piece is adjusted in 6 positions for chronometer level accuracy.

The beautifully finished movement, which is visible through the sapphire caseback, is decorated with circular graining on the mainplate, and Geneva stripes, as well as chamfered and polished edges on the bridges. A solid gold oscillating weight winds the mainspring.

The Breguet Type XXI flyback chronograph could benefit from a slightly thinner case, and no date window to clutter up the dial. However, there is a lot to like, such as the flyback chronograph with central minutes counter. Not to mention, the attractive retro theme, and exquisite case, dial, and movement finishing. (Ref. 3817ST/X2/3ZU)