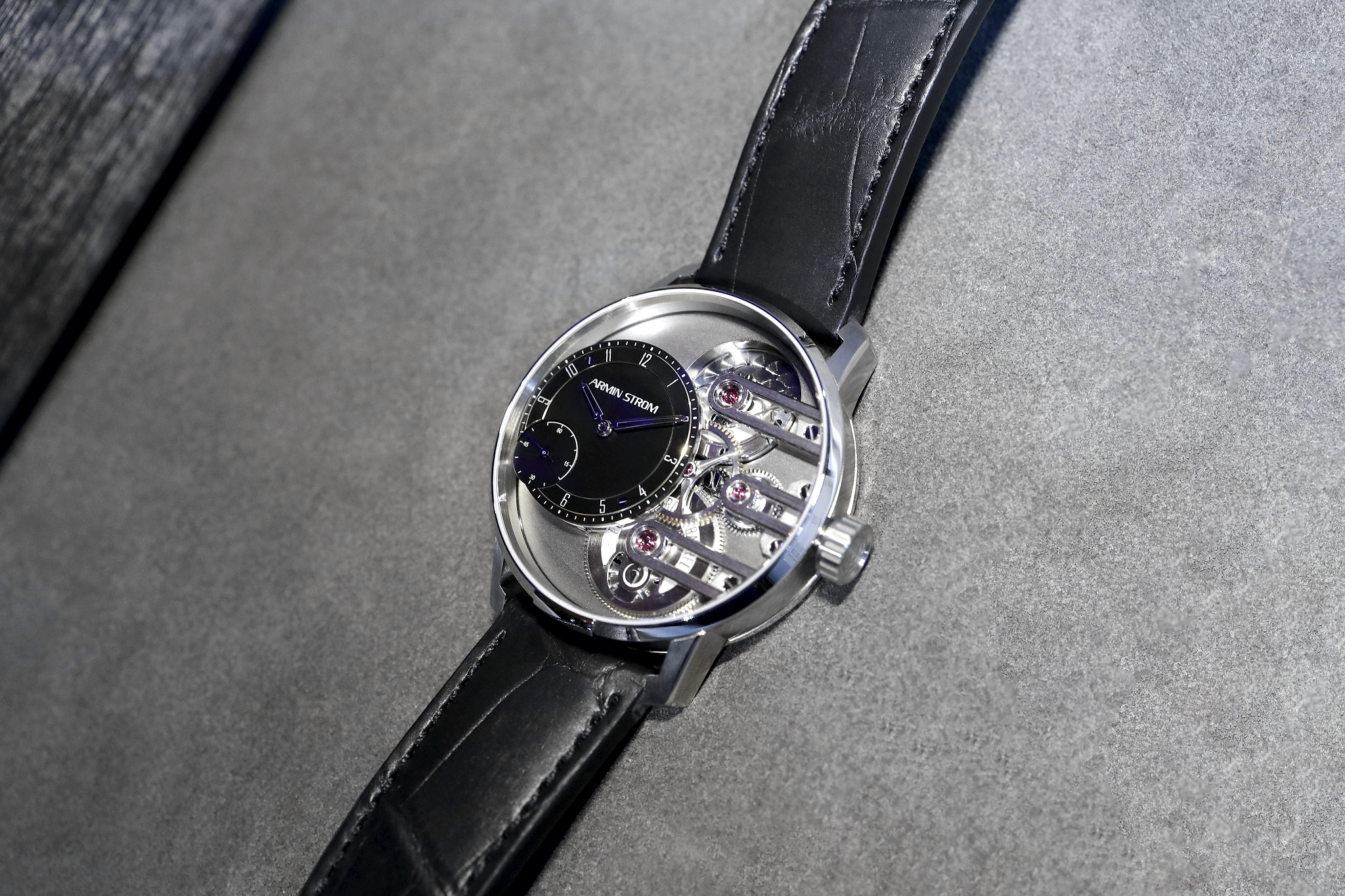 Presented in a 41 mm  x 12.65 mm stainless steel case, with a reduced version of the brand’s signature lip (at 6 o’clock), the Gravity Equal Force is the first watch from the new System 78 collection, named for the company’s two owners who were born in 1978.

On the wrist, the watch has the feel of a dressier watch compared to the company’s larger 44 mm timepieces, allowing it to easily slide under a cuff, but it also has enough size to look good on many wrists with short sleeves. It’s comparable in size to the Pure Force Resonance but is 1 mm smaller in diameter, which is a good thing.

A large off-center dial sits on the left side of the watch face, with three exposed horizontally brushed bridges on the right side, supporting the mainspring barrel, gear train, and automatic winding micro-rotor. The dial is shown in black but also comes in blue as well as a variety of custom color options. Printed Arabic numerals and a printed chapter ring coupled with polished, skeletonized lance-shaped stainless steel hour and minute hands (made in-house) indicate the time along with the small seconds dial that’s overlapping the primary dial at 7:30. Behind the dial is a frosted plate, shown in silver, but also available in other variations. In addition to the hours, minutes, and small seconds there’s a small power reserve indicator on top of the mainspring barrel located in the lower section of the dial.

The case is available in stainless steel at launch, although other materials such as gold, titanium, and platinum will presumably be an option at some point. A fixed, polished bezel frames the top of the case, contrasted by satin-brushed flanks and lugs. A large push-in crown makes it easy to set and wind the watch, without being so large as to be cumbersome on the wrist.

On the back, you can view the Geneva stripes on the bridges, beveled and polished edges, and the perlage of the mainplate (also visible on the front side, and available in different custom finishes). The balance wheel is suspended by a bridge similar to the three on the front of the dial and features a premium free-sprung design.

That basically covers all the visuals, but Armin Strom is a true manufacture and accordingly, the Gravity Equal Force features an in-house movement. Not to mention two technological advancements that enhance the chronometry of the timepiece.

The first is a stop-work declutch mechanism combined with automatic winding for the first time, which results in consistent power delivery to the balance over the majority of the 72-hour power reserve. So you get a more consistent amplitude across the entire power delivery curve, thereby enhancing rate stability and chronometric precision.

According to Armin Strom, “Building upon the classic stop-works mechanism, Armin Strom developed an ingenious stop-works declutch system that operates inside the mainspring barrel to limit the torque delivered to the balance, providing smooth power delivery. This represents the first time a stop-works declutch mechanism has been added to an automatic winding movement.”

The second innovation is a new motor barrel design that according to the manufacturer shows a clear advantage over the standard going barrel. Armin Strom watchmakers designed a barrel operating in the reverse of a traditional mainspring barrel by driving the going train via the barrel arbor and winding the barrel housing, which both improves functionality and reduces wear.

The new automatic caliber ASB19  beats at 3.5Hz (25,200 vph), is wound by a dial-side micro-rotor that winds unidirectionally, has 202 components, 28 jewels, and a 72-hour power reserve. In addition to the free-sprung balance wheel with 4 regulating screws,  the movement has a Geneva-drive equal force barrel, and Geneva stop-work limited to 72 hours. The uncased movement measures 35.52 mm x 11.67 mm and every component has been manually finished to a very high level.

Claude Greisler, a co-founder of Armin Strom, highlights the improved usability “We have reinvented the whole functionality of an automatic watch movement to bring another level of precision and to offer our collectors more assurance for reliable daily wear.”

The Gravity Equal Force features enhanced wearability and aesthetics with a slimmer, smaller diameter case, smaller bezel lip, and a triplet of bridges inspired by pocket watches – staying true to the brand’s open dial designs while offering a more classically appealing size. Horologically, the motor barrel mainspring design, the stop-works declutch system (inside the mainspring barrel), and the reworked gear train which provides equal force to the balance wheel and increases precision. Not to mention, this watch is now the most competitively priced timepiece within the entire Armin Strom collection.