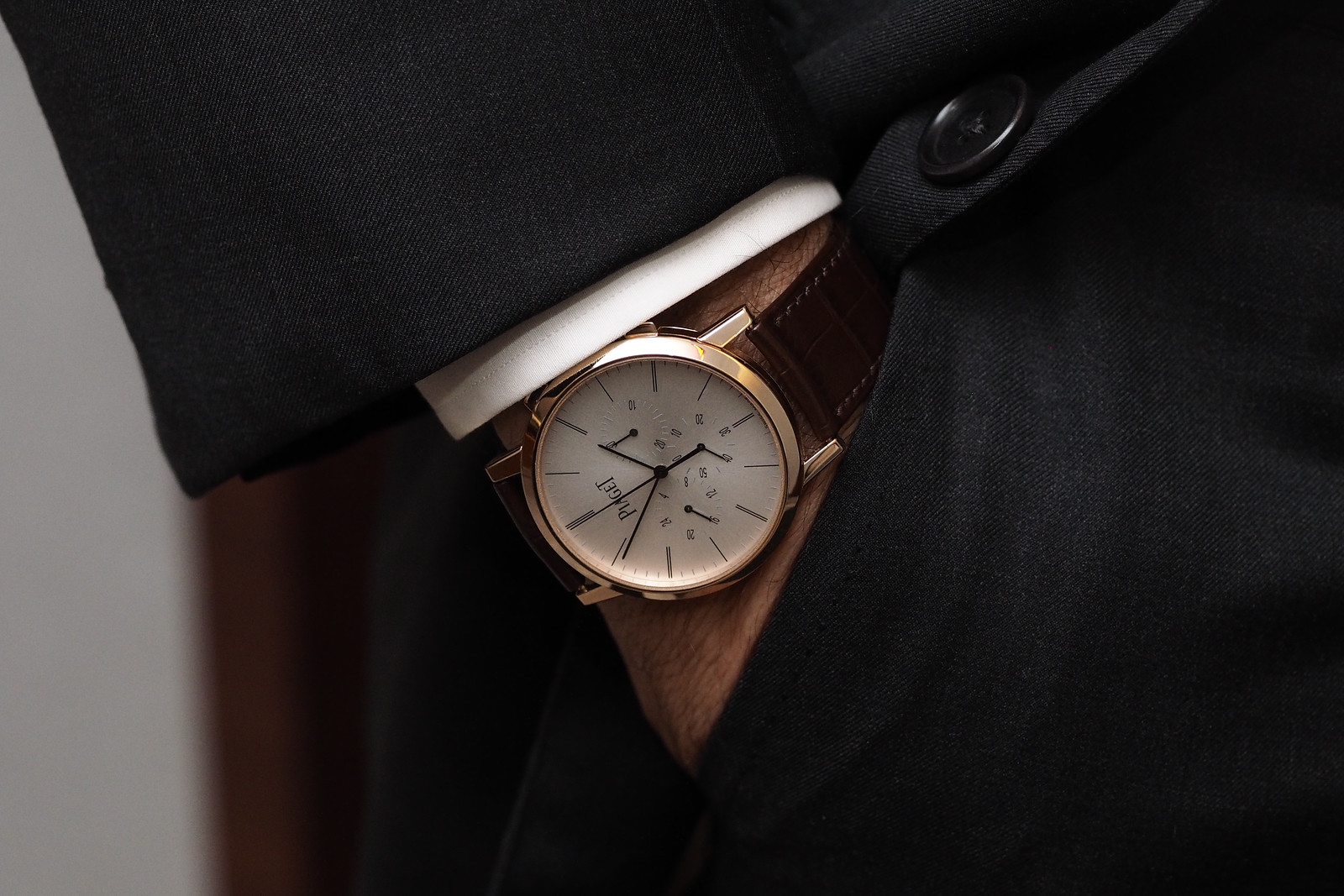 Ahead of its official debut at SIHH 2015 next month, La Côte-aux-Fées based manufacture Piaget gave us a hands-on preview of their new record-breaking ultra-thin chronograph.

Like the 900P that was introduced last year at SIHH, this watch is unprecedented in terms of thinness. With a case that is just 8.24 mm thick, and a movement that is a mere 4.65 mm, the Piaget Altiplano Chronograph is the thinnest hand-wound flyback chronograph in the world in terms of the ultra-thin caliber and the case.

But just because it is thin, don’t think that it sacrifices the premium features high-end chronograph buyers expect. The in-house caliber 883P features a column-wheel with a vertical clutch, a flyback, and exquisite finishing that includes: circular Côtes de Genève, a circular-grained mainplate, beveled bridges, sunburst wheels, and blued screws. In addition to the chronograph with flyback, which consists of a central second counter and a 30-minute counter at 3 o’clock, there is also a 24-hour dual-time indication at 9 o’clock that is controlled by a recessed pusher on the side of the case at 10 o’clock.

To achieve the record-breaking thinness, the watchmakers at Piaget used parts so small it is hard to even fathom, from the cannon pinion (at 0.12 mm) to the barrel staff (at 0.115 mm) to the chronograph gear finger (0.06 mm). With 25 ultra-thin movements holding 14 world records for their thinness, Piaget is unquestionably the master of thin watchmaking.

With a flyback chronograph and pushers that actuate as smoothly and precisely as some of the best chronographs we have tested, the Altiplano Chronograph is a technical marvel. But this is a Piaget, so it has to, of course, look as good as it functions.

At launch, the Altiplano Chronograph will be available it will be available in two versions: pink gold or white gold set with 56-diamonds. Each is presented in a case measuring 41 mm in diameter, with a beautiful sunburst satin-brushed finish dial accented by slender baton-type hands and alternating single and double hour-markers. Keeping to Piaget’s classic style, the chronograph pushers are elongated and blended seamlessly into the case.

On the wrist, the Altiplano Chronograph is comfortable and looks about perfect for a dress watch. It has a 50-hour power reserve and is paired with an alligator leather strap fitted with a pin buckle.