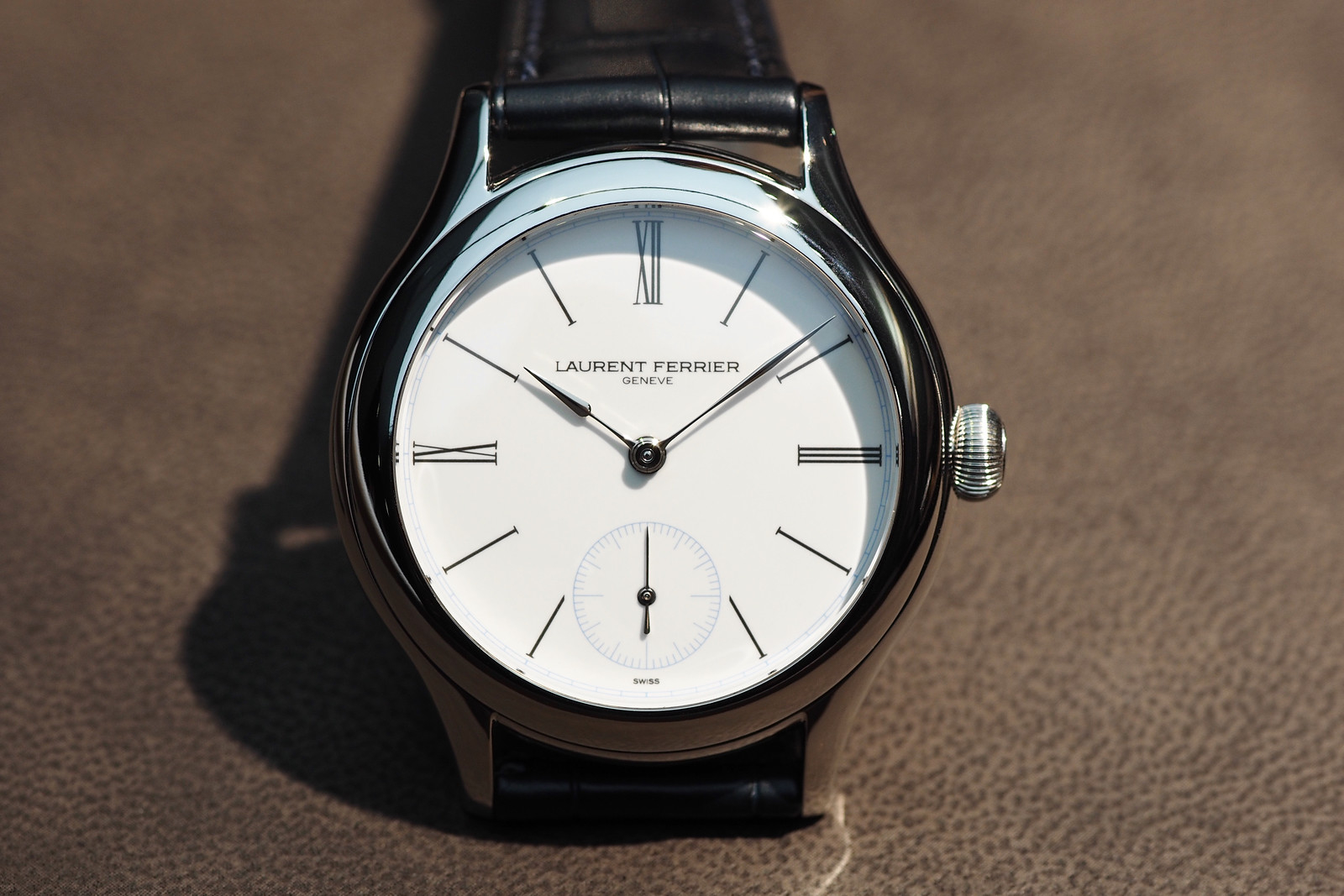 Laurent Ferrier has over three decades of experience in the watch industry – including at Patek Philippe most recently – where he has very quickly built a distinguished independent watch company from scratch (first watch launched in 2010). Inspired by 19th-century pocket watches, his timepieces represent the simplicity, uncluttered aesthetics, and precision he values. He develops his own watches, from conception through production and in doing so is backed by his son Christian, a guarantee of continuity.

This particular model – launched at Baselworld 2015 – is the Galet Micro-Rotor in platinum and is limited to 18 pieces that will be delivered over the course of a 3-year production cycle. The first of which has just been delivered, with at least one more expected to be available for sale this year.

Similar to the Galet Classic, this limited model has an absolutely sublime Grand Feu enamel dial with long slender hour Roman numerals. The numerals are painted in black on the white as part of the arduous enamel dial making process that includes multiple layers of fired enamel.

The light blue train track style minutes chapter ring and small seconds ring are also painted on during multiple firings of the enamel dial, as opposed to being printed with a traditional stamping machine after the dial has already been created.

The production process of the so-called “Assegai” hands highlights one of the many details that make a Laurent Ferrier unique.

According to a company representative in producing the hands, “Laurent contacted a couple of Swiss hands makers as he didn’t want the standard industry hands which are largely made by bending a flat hand with a diamond file and giving it shape. He wanted a three-dimensional hand that was soft, unique, and elegant. He was originally turned down as not one company had the know-how or the technology to achieve his target. In 2009-2010 as business was not so great one of these hands makers brought back from retirement a master craftsman to achieve what is probably today the most complex hands in the industry.”

Laurent Ferrier has not stopped using these hands and it has become one of his trademarks together with an exceptional movement finish, caliber design, including technical features such as the natural escapement or the double spring Tourbillion.

Flip the watch over, and you’ll see all the best horological finishes including satin-brushing, polishing, beveling and circular graining – all performed in an entirely traditional way and complemented by a Côtes de Genève motif.

For a movement this thin (4.35 mm), the view of the meticulously decorated components is excellent, thanks in part to the automatic winding off-center pawl-fitted gold micro-rotor. The system is fixed between the mainplate and the micro-rotor bridge and features a silent block shock protection system. The maximum power reserve is 72-hours.

The movement beats at 3Hz, has 35 jewels, and 186 total components.

A unique technical feature worth noting is the regulating assortment, which in this application consists of a silicon lever escapement with double direct-impulse on the balance. It was inspired by the “natural” escapement that was invented by Abraham-Louis Breguet.

“This modern construction, combined with the use of cutting-edge materials, maximizes energy efficiency, which in turn ensures high amplitude for the balance and reduces the mechanical force required to wind the mainspring,” according to Laurent Ferrier.

One more fact worth mentioning: The regular production Galet Micro-Rotor models are typically 40 mm but because platinum is softer the case has been increased to 41 mm to accommodate a case back that is actually screwed. By adding 1 mm, it gives the screws more beef to grip.