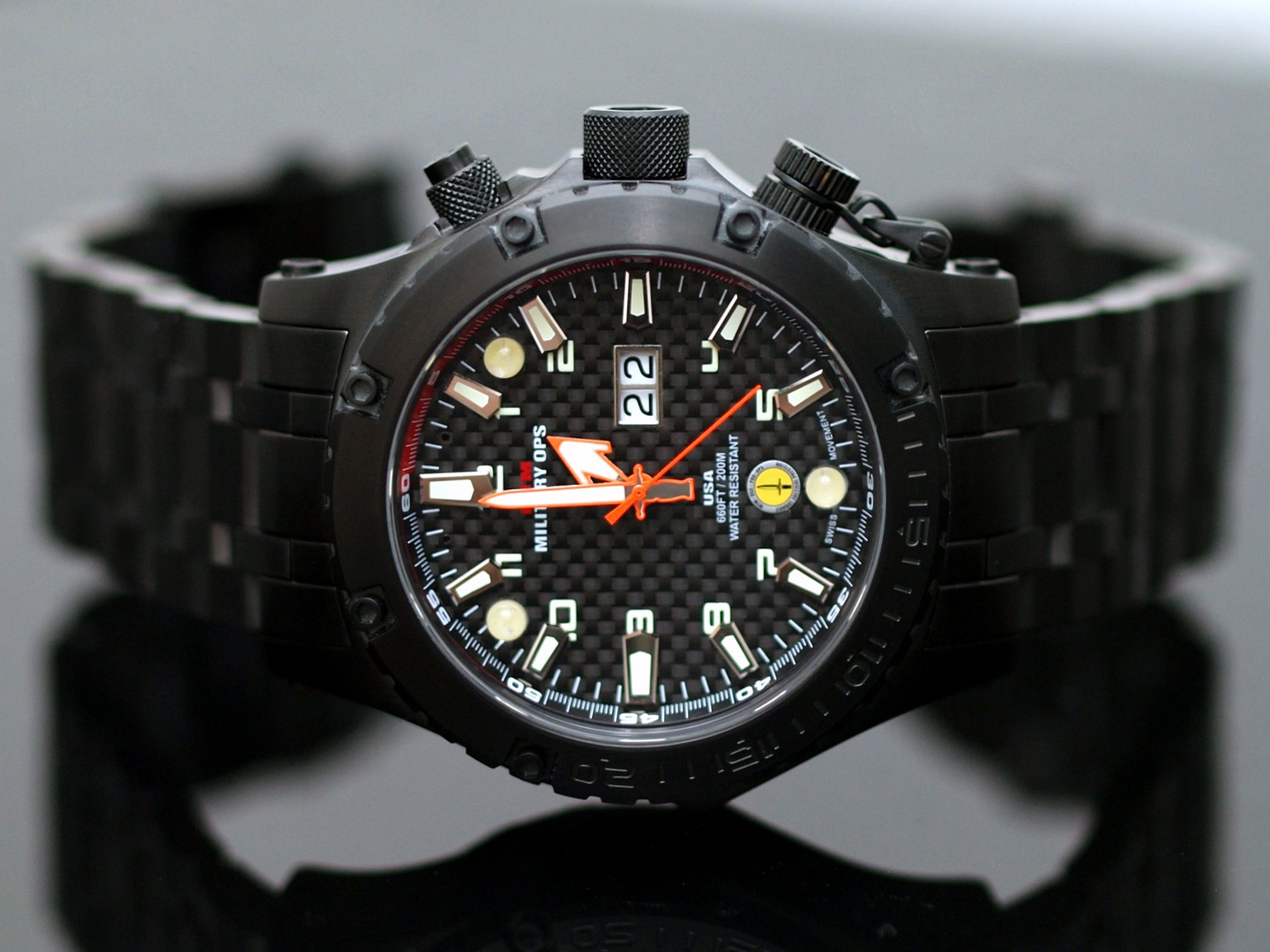 A few months ago, I had a chance to review the MTM Special Ops Black Vulture Titanium watch. Along with the review, I took many photos of the watch, so I could show you some of the unique features of the watch.

The case and bracelet are made of solid titanium, a metal that is very light, but for whatever reason, this particular titanium case is extremely heavy. Some people like heavy watches, so why does this matter? Well, for one, soldiers using this in the field would be adding a lot of unwanted weight to their already heavy load that includes weapons, tools, and other survival gear. I personally know an active military officer, who has served in Iraq and will be seeing action again in Afghanistan later next year, and we have discussed what a perfect military watch should be like, and lightness is definitely something he emphasized. Maybe the heaviness comes from the fact that a larger battery is used to power the LED and UV light, but still, it is uncomfortably heavy nonetheless.

Speaking of comfort, the case is gigantic, at 47 mm x 17.5 mm, it is really big, unless you have really large wrists. And even if you do have larger wrists, the height of the watch is going to make it hard to slide under the sleeve of a shirt. At 17.5 mm in height, it is intrusively tall. After speaking with my military friend, another thing he mentioned was that he preferred a thinner case because it allows the watch to comfortably slide under the sleeve of his shirt. Brands like Casio and Lum-Tec, which have a large base of military clientele, have paid attention to this type of detail and made watches that are accordingly thin and comfortable.

The MTM watch is clearly not designed for comfort, in fact, the case edges, and the edges of the bracelet are very sharp. They are not sharp enough to cut you, but if a little too much force is applied, I can see one of these causing some serious pain to your wrist. By simply rounding off the edges of the case and bracelet, this could have been easily avoided. Now, combine the massiveness of the case, with the sharp edges, and you truly have an uncomfortable watch, unless you are the size of Brock Lesnar.

Previous versions of this model used a black PVD plating, which for military use is very smart. The black makes the timepiece both non-reflective and highly resistant to scratches and corrosion. Recently they upgraded to a black DLC finish, which is even better. For the most part, I think they used the right finish on this watch, although the quality of the DLC finish seems a little questionable. I own a DLC timepiece that has a far superior DLC finish, but then again my timepiece costs triple the price and is a satin finish. My guess is that the matte DLC finish looks inferior, mainly because it is matte and attracts more fingerprints than a satin case. A satin case is not a good choice for a military watch because it is semi-reflective, so maybe my criticism of the finish is not justified.

The big selling point of this timepiece, over other comparable military-specific pieces or really almost any timepiece out there, is the integrated LED and Ultraviolet lights. Unfortunately, these two functions are part of the reason that the watch is so large. However, if you really find utility in having a LED and UV light on your wrist, as opposed to a dedicated flashlight, like a Surefire for example, then this is clearly one of your best options. Remember that LED lights are very power-hungry, so you will need to recharge them using the included USB cable (note: the charger only works with a USB connection, so you cannot just plug it into a normal wall socket). With that said, it is at least a lithium battery that can hold a decent charge, and the quartz movement is powered by a separate standard watch battery, which thankfully means you will not have to reset your watch every time the LED runs out of power.

It would have been nice to see this as a chronograph, however, the dial is more simple and easy to read without all the subdials of a chronograph. The dial is made of real carbon fiber and looks appropriate for a military spec watch. The pushers and crown are screwed down. The caseback is solid titanium and screwed-in. The crystal is sapphire with an anti-reflective coating, something that is critical for soldiers in the field (who do not want to give away their position to the enemy by wearing a reflective timepiece).

Water resistance is 200 meters or 660 feet, which is more than enough for most military diving excursions. The bezel is unidirectional and has a 60-minute dive function. The dial has very good luminous material and colors on the indices and hands, and when you switch it into UV mode, the visibility is further enhanced. The three LED lights are very bright, but there is no way to focus them, so you are pretty much limited to using them for wide-angle lighting.

Overall, the LED and UV light, along with the strong, scratch-resistant, and non-reflective case are good selling points on this watch. Considering its professional designation, it worries me that there is a possibility of activating one of the four lighting modes during combat (the pusher can be locked, but once unlocked accidental activation is likely to occur). And I find it hard to believe that a military officer or soldier would want to wear something as big as this, plus the price seems unjustifiably high.

It has a Swiss quartz movement and a proprietary lighting system, but then again, for this price, you could buy a professional swiss quartz wristwatch, and a high-end tactical Surefire LED flashlight, with money left over for a side-arm. It is hard to recommend this watch, especially considering the target market, which has very high demands for their timepieces. But if you must have it, you might want to consider one of the versions with a strap, as this will save you $300 and it will surely be more comfortable than the sharp-edged titanium bracelet. Retail price is $1,100 to $1,400.