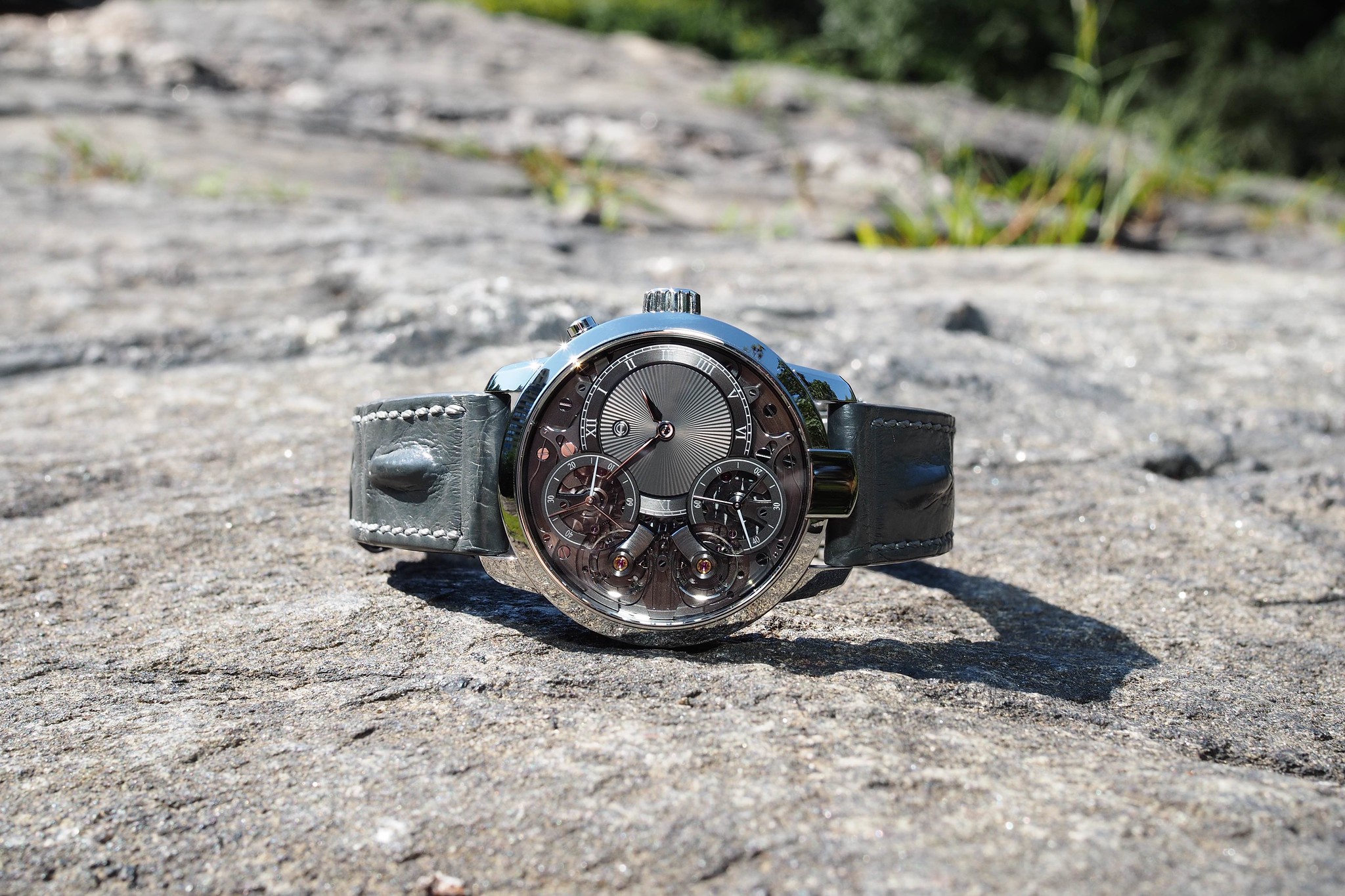 In 2016, Armin Strom debuted a very special timepiece called the Mirror Force Resonance. Conceived in-house over a period of three years — the watch is based on the principle of resonance — it represents a significant technological breakthrough.

“In mechanical systems, resonance is a phenomenon that occurs when the frequency at which a force is periodically applied is equal or nearly equal to one of the natural frequencies of the system on which it acts,” according to Wikipedia.

Similar to the resonance timepiece from Geneva-based watchmaking legend FP Journe, Armin Strom SA produced a movement with two balance wheels that oscillate in sync via resonance. Crucially, Armin Strom’s way of creating resonance is achieved in a different way, technically speaking. In fact, it’s more stable and thus more accurate, and it has been confirmed as a “true mechanical resonance” system by CESM.

It’s worth noting that resonance can also happen through airflow or vibrations through the mainplate but it’s much harder to achieve and to keep it stable using this method. Moreover, it was Armin Strom’s goal to not just make the watch more precise, but also to show the beauty of Resonance to the collector (see video below).

Swiss Center for Electronics and Microtechnology

The CSEM, or Swiss Center for Electronics and Microtechnology, is a non-profit research-and-technology institute established in 1984 that exists to cooperate with Swiss companies. “We are above all for the smaller companies here, not only for our large shareholders,” confirms Jens Krauss, vice-president of systems at CSEM. “We support small companies by putting our specialized tools, technologies, engineers, and even production services if needed or desired at their disposal.”

“The organization pursues applied and industry-commissioned research and development, specializing in the transfer of technology between pure science and industrial use. Rooted in horology, though no longer exclusively at home there, CSEM is a facilitator of deep science with a mission to develop technology, generate IP, and transfer that IP for industrial use. CSEM researches and studies leading-edge technologies create technology platforms, and matures technological and scientific research with limited risk to industry partners, thereby increasing their commercial possibilities.”

“In the case of the Mirrored Force Resonance, Armin Strom came with the idea, the realization of that idea, watchmakers, and know-how that we do not have,” Krauss continues. “We have the engineering potential, equipment such as high-speed cameras and simulation software, physicists, and other R&D-based technology. We are very happy to be collaborating this way.”

With Armin Strom’s mechanical resonance system, as mentioned above, a special resonance clutch spring was created which resonates with the vibrations of each of the balance wheels to the opposite wheel, making the watch very accurate, something not possible by any other companies’ currently.

Interestingly, upon activation of the balance wheels from a stopped point, it can take up to ten minutes for the two wheels to resonate in sync. Additionally, once the wheels are “in resonance” so to speak, in order to reset the two small seconds hands that are continuously rotating, so they are also in resonance, you need to press the pusher on the right side of the caseband, which automatically syncs them.

In fact, it’s more stable and thus more accurate, and it has been confirmed as a “true mechanical resonance” system by CESM.

Each of the free-sprung balance wheels, which also have their own independent balance spring, escape wheel, pallets, and so forth, oscillates at 3.5Hz (25,200 VPH). They rotate in opposite directions, connected in between by the clutch spring, which you can clearly see vibrating very fast kind of like a hummingbird’s wings (see the video below).

One of the benefits of this design is the visibility of seeing the energy from the resonance taking place, as compared to resonance where the energy travels through the mainplate and you see nothing happening.

The effect is visually impressive, and perhaps even calming like watching a waterfall flow or waves crashing on at a beach shore.

The Armin Strom Mirrored Force Resonance, which we covered hands-on already, is a very important piece for the company, and for chronometry (which is the advancement of timekeeping).

Editor’s note: Different from the Mirrored Force, yet essential to adding to the same technology is the new Masterpiece 1 Dual Time Resonance, which was introduced in October 2018, is yet another watch using the technology, albeit an even more advanced version, although not with the same type of mainstream appeal as the Mirrored Force due to it being in an oblong case, costing much more, and being highly limited.

The Mirrored Force Resonance measures 42 mm in diameter (on the bottom of the case) and 43.75 in diameter (on the top side). Essentially, the bezel hangs over the edge a few millimeters. The watch that we tested comes in a round stainless steel case with fully polished steel bezel and satin-brushed flanks.

As tested (in stainless steel) the watch weighs 125.9 grams with the alligator leather strap shown, although the watch can be thoroughly customized (using the online Configurator tool) in a number of materials. Lug-to-lug the case measures 50 mm and 13 mm in thickness. The steel crown is 7.75 mm in diameter. Interlug width is 22 mm, and the strap shown tapers down to 20 mm at the deployant clasp (which can be customized as well using the online configurator.

The guilloche-work dial on this model was made at the Kari Voutilainen manufacture under the master watchmaker’s supervision, and as you might expect, the results are stunning. There are a variety of patterns and colors available. This one came in a gray that blends in with the rest of the dial and movement as opposed to popping like the red or blue dials.

Each dial is manufactured in Voutilainen’s Môtiers-based workshop, on vintage engine-turning lathes, which are operated by hand. The intricate patterns, obtained by chiseling a smooth metallic plate with extreme precision and care, are true pieces of art, reflective of the craftsmen’s skills and virtuosity.

The Mirrored Force Resonance watch in steel is not too heavy, good weight on the wrist, and it could be made even lighter in titanium. With short articulated lugs, it sits nicely on my 7″ wrist. At 13 mm in thickness, it is definitely noticeable and as I do with many sportier watches, I found it better to go with short sleeve shirts than dress shirts. With a dress shirt, it wears best outside the cuff.

Having a fully polished bezel definitely gives a sheen and makes the luxurious watch, more noticeable as a luxury watch. However, I did not find it drew as many stares as something like this Panerai Luminor or Audemars Piguet Royal Oak.

Looking down at the dial side, where most of the movement’s mechanics also lie (the back is finished nicely but mostly consists of the mainplate and dual power barrels, you can admire the intricate components which have all be finished to a very high level. And in particular the incredibly well down Kari V dial that shows hours and minutes. Compared to the entry-level Pure Resonance, I prefer this layout. However, due to the overlapping of the Resonance subdial, 10 and 11 o’clock have been obstructed which does take away from timekeeping but I suspect that the buyer of a watch like this will enjoy the ballet of the dual balance wheels and clutch spring enough not to need an observatory or regulator type dial.

Doing what’s fundamentally different than what your competitor’s do is often a good way for a company to compete, especially in a crowded market filled with homogenous products.

Armin Strom has ingeniously taken advantage of the phenomenon of “resonance” within watchmaking, and in doing so they’ve elevated themselves to another level, on par with some of the greatest independent brands.

The Kari Voutilainen dials, for example, are not available to just any independent watch brand, Mr. Voutilainen is the type of watchmaker that will only associate with the best of the best watchmakers, and so this in itself is a coup for Armin Strom.

Armin Strom produces tourbillons, but so do many watchmakers on the market, so producing something totally unique on the market, is a great way to show consumers that your company is a real watch manufacture, capable of great things. If successful, the product becomes a halo for the brand.

And I believe that the Mirrored Force Resonance has become just that for the Bienne-based watchmaker: a product that will bring great awareness to the Armin Strom brand name. (See inside the Armin Strom manufacture.)

For a price of approximately $60,000, you can custom configure the Kari Voutilainen equipped Mirrored Force Resonance here.