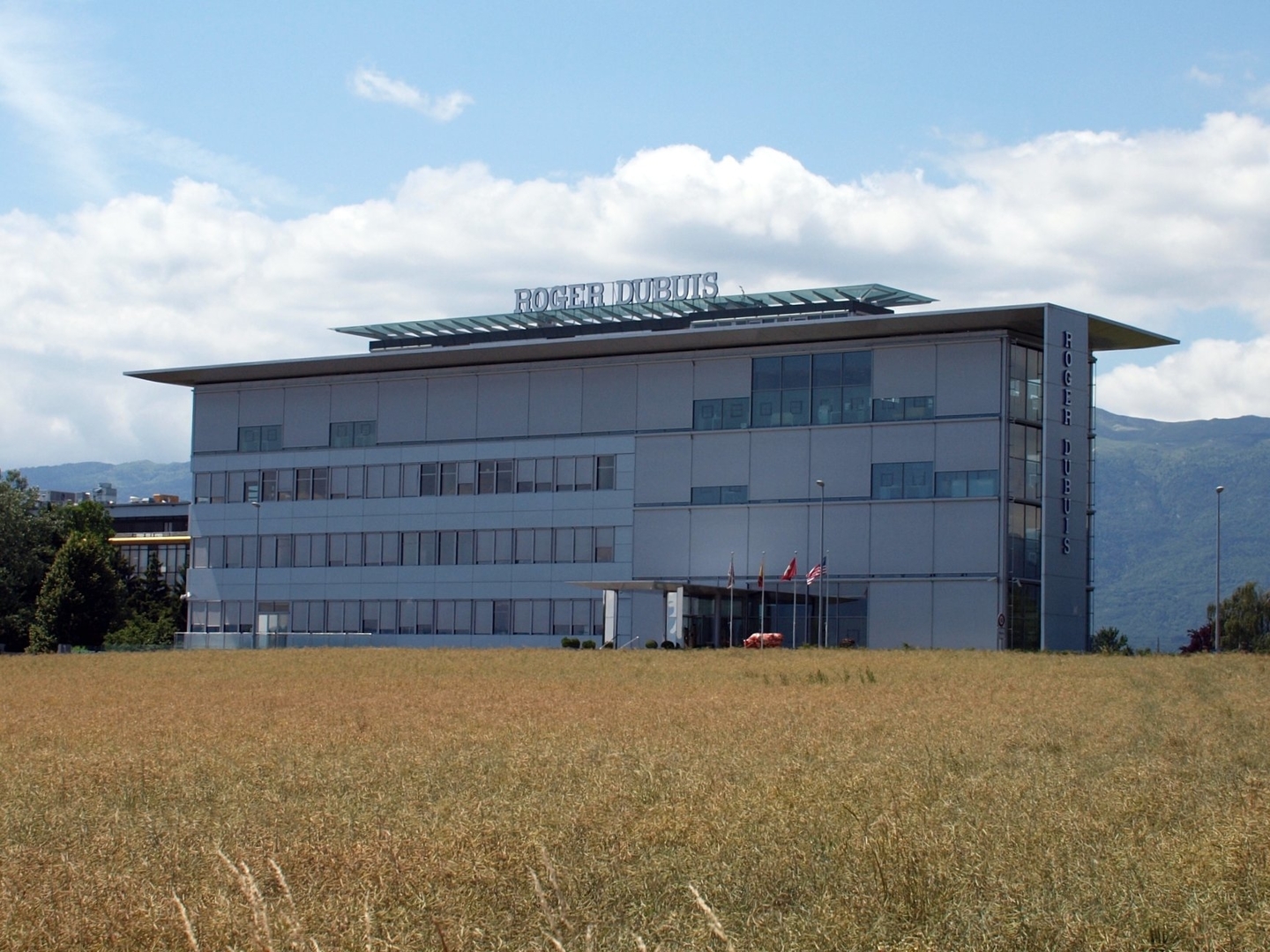 Overview of Roger Dubuis Manufacture Visit from June 2010
Roger Dubuis was founded in 1995, and is a true manufacture (meaning they produce some or all of their own movement calibers in-house.) Their watch designs are contemporary, however, their movements are actually more traditional, with classical complications, such as chronographs, torubillons and minute repeaters, made in-house, by hand. This is what makes Roger Dubuis a truly exceptional brand.

During our two day trip to Geneva, we toured the manufacturing facitily and worldwide headquarters, which is located in between the Jura mountains and Alps (with a perfect view of both). For the majority of our visit, we toured the factory and met with the people behind the brand. However, being that the weather was absolutely perfect both days, it was nice that they planned a few fun excursions for us as well.

On top of eating excellent French cuisine and staying in one of the best hotels in Geneva (La Reserve Geneve), we also had the unique opportunity to visit a small local wine vineyard (Dardagny Vineyards of Geneve) and participate in a tasting of their best wines. And to top off a perfect trip to Geneva, we got to fly over Lake Geneva and the surrounding mountains in a helicopter for 20-minutes. Needless to say, the trip was amazing.

History of the Manufacture Roger Dubuis
Roger Dubuis was acquired by the prestigious Richemont Group in 2008, and over the past few years a number of improvements have been implemented, with the assistance of Richemont, to make the brand even more viable. This factory tour and press trip, was intended to help communicate all the efforts and achievements within Roger Dubuis SA, since the acquisition.

Upon acquiring Roger Dubuis, with the help of Richemont, the team, headed by former IWC COO Matthias Schuler (current CEO of Roger Dubuis), began looking for ideas of how to improve the brand. When you are dealing with a brand that was founded only 15 years ago (in 1995) you have to really focus on how to be different. It would not make much since for Richemont to acquire the brand, if they cannot offer a product that is different than the other well known brands within the group, especially when those brands have been around, on average, for over 100 years each.

Roger Dubuis was founded by talented watchmaker, Roger Dubuis and visionary designer Carlos Dias. After only four short years, they had already become a full-fledged movement manufacture (meaning they produce at least one of their calibers in-house). Upon producing their first exclusive caliber, in-house, they also met the requirements for the Geneva seal, and in doing so became the youngest watch brand to make a Geneva seal movement (1999). This was a major milestone, and helped launch the brand to a much higher status level within the watch community.

Integration into Richemont Group
Over the years they grew the brand around their watchmaking know-how and eventually produced more than 28 exclusive, in-house calibers. Quite a feat for almost any watch manufacturer, let alone a watchmaker this young. Eventually in 2008, one of the co-founders, Carlos Dias, (Roger Dubuis cashed out prior to the Richemont acquisition) decided to cash in on all his hard work, and sold out to the Richemont Group (for around $600 million).

nd while this may sound like a bad thing, it actually was the opposite, as the Richemont Group is known to utilize synergies between brands, while leaving them to operate autonomously. Richemont is a proud brand, led by CEO Johann Rupert, and consisting of some of the finest watchmaking maisons in the world, including Jaeger-LeCoultre, Cartier, Panerai, Piaget, Baume & Mercier, Lange, Mont Blanc – and Roger Dubuis is no exception. Fifteen short years ago Roger Dubuis carved their DNA in the watch world, and earned a reputation by making their own movements. Now they are part of the most prestigious family of watch brands in the world.

New Brand Strategy
With the acquisition by Richemont in 2008, and the obvious effects of the recession, the brand determined that they needed to make some changes. These changes do not affect the brand’s core DNA, which is basically contemporary designs, powered by classic movements, with classic complications. Instead of changing the core DNA of the brand, the CEO Matthias Schuler, has led the company through a number of strategy and policy changes designed to increase the companies competitiveness.

Lower Entry Level Pricing Point
The entry level price point has been greatly reduced. Men’s watches now start at $12,900 (here’s one), which is about $5,000 lower than a year ago. This, to me is a major part of the strategy, because if you are only selling tourbillons, and they do sell many tourbillons, then you are missing on a big income bracket within the high-end watch market, the entry level. And at $18,000, or so, retail, the price of entry is that much higher. Just lowering the entry level price, should automatically attract more overall customers to the brand. All while keeping the factory at a higher production capacity, meaning they can operate more efficiently.

Less references, higher quality and exclusivity
Making more references than necessary can cause production, marketing and after-sales issues. I’ve spoken with a number of different watch brands, and it seems apparent that producing too many references is never a good thing. Just like the auto industry in the US, producing too many car models has led American car manufactures into a lot of problems. The new product strategy at Roger Dubuis seems to be a trend across the industry. Reduce the assortment (the number of different timepieces and versions), while placing more focus on the best selling core timepieces.

Core DNA, refreshed designs
Lionel Favre, the Head of Design at Roger Dubuis, has taken what he has learned during many years of design school and his experiences as a designer at Chopard’s L.U.C. manufacture, to make Roger Dubuis watches look more upscale, with many subtle but effective changes to the core pieces of the brand. There is also a totally new cushion case in the works, which should be introduced soon. Aside from this new design, the design team is mostly redesigning current models, to make them more appealing.

As I’ve said before, I really like Roger Dubuis’s haute horology Excalibur Skeleton tourbillon piece. And being a bestseller already, all Lionel does with this piece is make minor changes, like, for example, making the fluted bezel more prominent. Many of the changes are evolutionary, as opposed to revolutionary, but important nonetheless.

At the opposite end of the price spectrum, Lionel has helped to significantly redesign timepieces like the Easy Diver. The new design is now a personal favorite of mine in this price range. I really like the silver dial and orange markers, combined with sub-dial that displays small seconds. Overall, the design team has done a great job refining and refreshing the pieces within the entire collection.

Third Party Testing to Guarantee Quality
As of 2010, Roger Dubuis is one of the few brands in the world to subject their movements to the criteria of both the Geneva Seal (aesthetic requirements) and COSC (chronometry requirements). This is excellent, and really should help improve actual quality and perception of quality of the brand. But that is not even enough for the management at Roger Dubuis. They are actually working to get an additional third party to test their movements.

According to Dave Chaumet, the Head of Customer Service and Quality, a company called TimeLabs is working to incorporate an additional requirement in conjunction with the Geneva Seal, a requirement that actually refers to chronometric accuracy, much like the COSC-chronometer certification. I asked Dave if this was meant to replace the COSC certifications that Roger Dubuis has implemented with all their movements, as of this year, and he said “no”.

They are actually looking to utilize all three, which would make them the only brand to have three separate third parties who test and approve their movements. If this is what it takes to show that Roger Dubuis calibers are at the top of the top, and it does not add too much to the retail price, then it sounds like a good strategy to me.