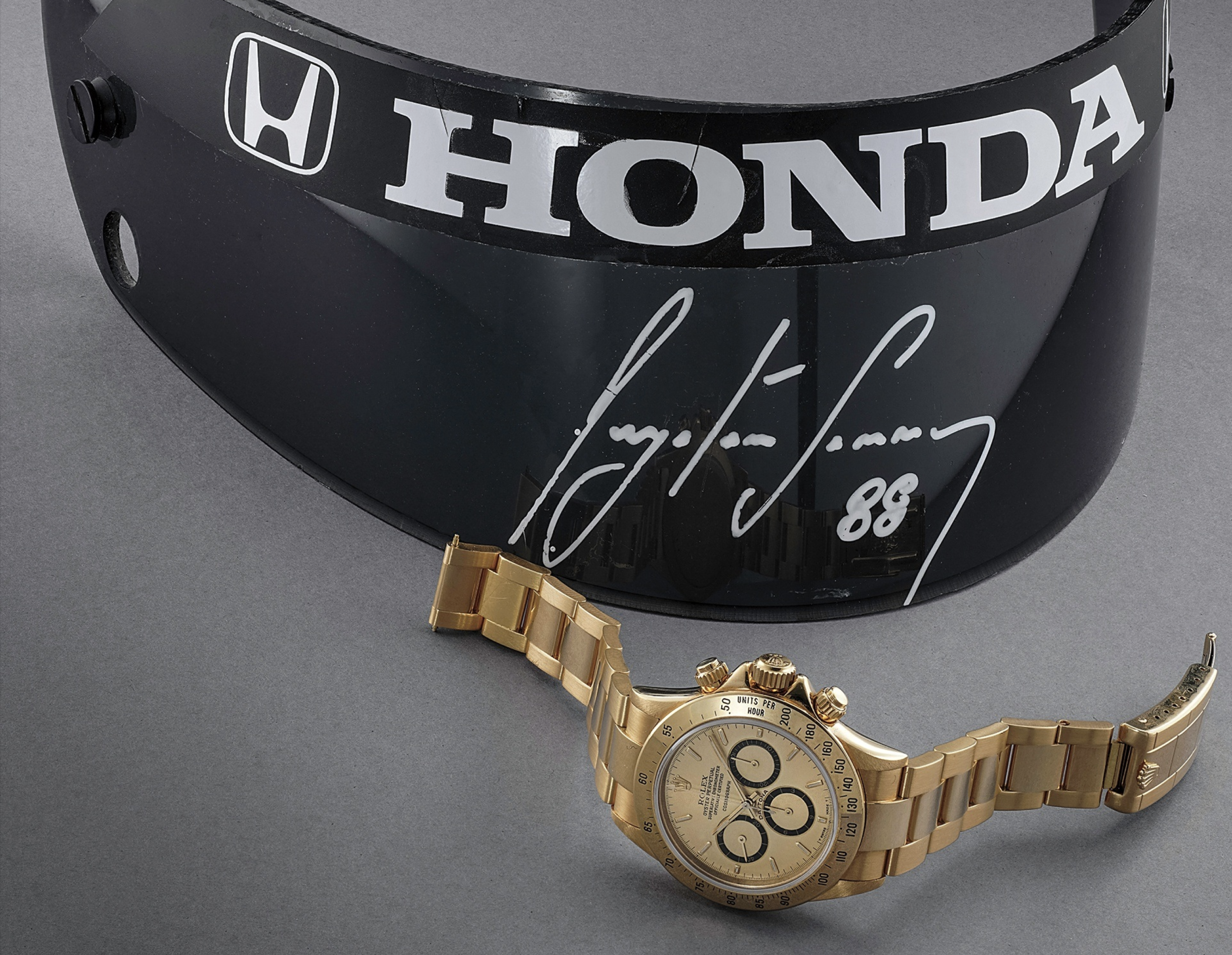 In the upcoming Nine Geneva Auction to be held May 11th and 12th, by Phillips Geneva, there will be a very special Rolex Daytona, and no it’s not Paul Newman. Nor is it Paul Newman’s Paul Newman Daytona, the greatest watch to ever sell at auction. It was, however, given as a gift, from one of the greatest Formula One drivers of all time.

Ayrton Senna, whose legacy will be forever immortalized in racing, and is idolized in not just his home country, Brazil, but also around the world, had the message “A Angelo da Ayrton 1978” meaning “to Angelo from Ayrton” engraved on the back of this 18K yellow gold Rolex Daytona Ref. 16528 that’s coming up for sale next month.

The watch’s recipient was Angelo Parrilla, Senna’s mentor who discovered him during his Karting days, beginning at the age of 18 (in 1978, hence the engraving, even though the watch itelf was actually made in 1989), which eventually led to him becoming the Formula One World Champion three times. His tragic and untimely death happened on the race track, doing what he was most passionate about, which is likely part of why his story is so compelling.

You can learn a great deal about Ayrton Senna on his official Wikipedia page. And the highly regarded documentary film made about him called Senna, is perhaps the best way to visualize a racer doing what he loved, at the absolute highest level, before all the modern technology of today.

Lot 23 is a memorable one for sure. It not only includes a circa 1989 R series 16528 Rolex Daytona, the earliest iteration of Rolex’s first automatic gold chronograph, that’s fitted with a rare floating dial and Mark 1 bezel – it also includes one of his iconic Honda visors personally signed by him.

If the rumors at true, that Rolex was the anonymous winner of the PNPN Daytona in 2017, likely to display in their tentatively planned Rolex museum, then there’s a good chance they’ll bid on this horological piece of racing history as well. At $100,000 to $200,000 there’s too much upside for a company like Rolex to miss this one.