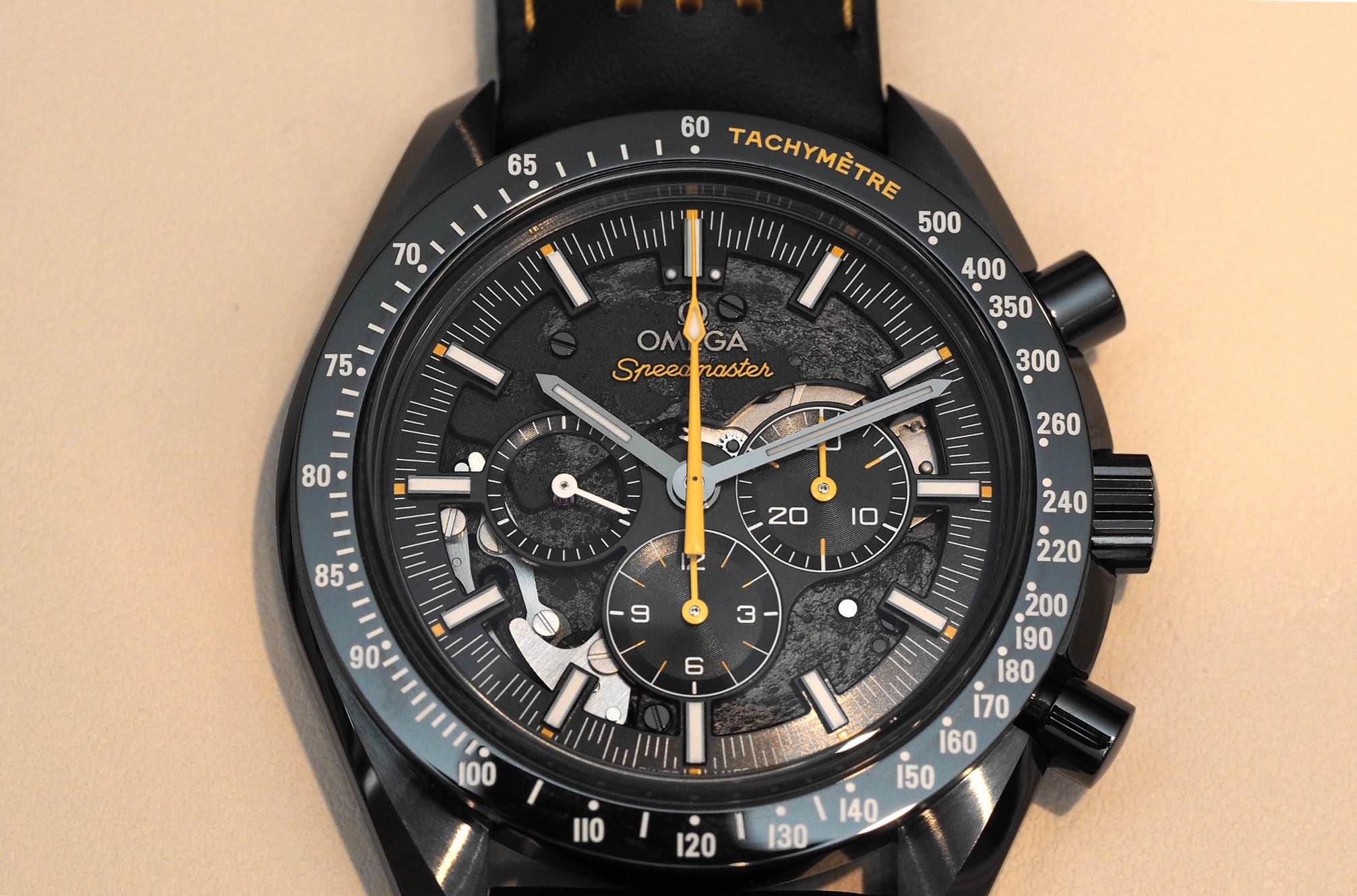 Speedmaster Dark Side of the Moon Apollo 8 Hands-On

One of Omega’s special editions for 2018 is the Dark Side of the Moon Apollo 8 which pays homage to the second manned spaceflight in the Apollo 8 space program which was launched December 21, 1968, and became the first manned spacecraft to leave Earth orbit, reach and orbit the Moon, and return to Earth.

As a tribute to this important space exploration milestone, the perimeter of the ceramic caseback is engraved with “WE’LL SEE YOU ON THE OTHER SIDE” along with the date “APOLLO 8, DECEMBER 1968” and “DARK SIDE OF THE MOON.”

As discussed when we first reported on the new Apollo 8 special edition, the movement used in the Speedmaster Moonwatch Professional, caliber 1861, has been redesigned with laser-ablated bridges and mainplate which resemble the moon’s surface. The movement also has blackened or matte screws, and a dark nickel coating on the wheels and balance wheel. The new movement is called caliber 1869 to reflect the modifications.

The Speedmaster Dark Side of the Moon Apollo 8 comes in a black zirconium oxide ceramic case, measuring 44.25 mm across the dial, like the original Dark Side of the Moon, however, thanks to the use of a thinner movement and a non-box crystal on the backside, the thickness of this watch is 13.80 mm as opposed to 16 mm.

The mostly black watch is contrasted by a bright yellow color which is seen on the varnished chronograph hands, above each hour marker, on the tachymeter scale, and for the thread and rubber lining of the perforated strap.

On the wrist, this model is extremely light due to the ceramic case, and although I generally prefer a slightly smaller diameter, as is seen on the Speedmaster Moonwatch Professional, which is 42 mm, the extra width is barely noticeable, thanks to the watch relatively being thin.

As mentioned in our original article, the decorations of the movement are definitely a cool touch, but you will pay a hefty premium for a movement seen in the Moonwatch at a starting price of around $5,000 (which is, by the way, a phenomenal watch). What you get for a premium of almost 40% is the decorated caliber 1869, a black ceramic case, a matching strap, and a special presentation box.