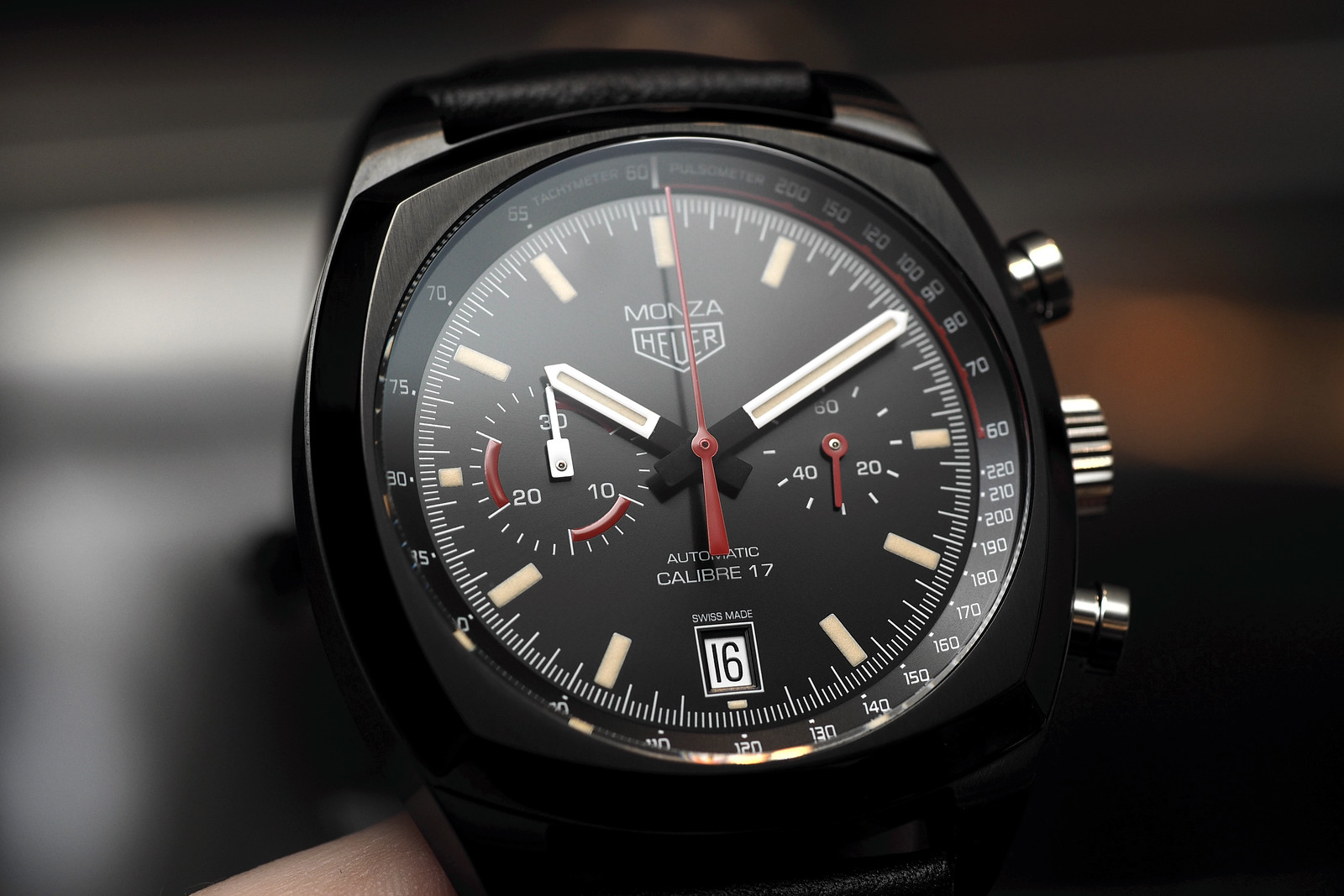 To give a little background, Monza is a legendary race track known for being the fastest in racing, and the home of the Italian Formula One Grand Prix.

“TAG Heuer’s link to the legendary track goes back to a warm day in September 1975 when Swiss driver Clay Regazzoni took first place at Monza, and his teammate, Niki Lauda, took third, which was enough for him to win the Formula One World Championship for Ferrari. Both Ferrari cars had the name “HEUER” emblazoned on their chassis — the brand had been the team’s official timekeeper since 1971. To honor the result, Jack Heuer reworked an existing cushion-shaped 1930’s model in a special limited series. Equipped with a high-speed Calibre 15 movement, the stunning new chronograph sported the name ‘MONZA’ above the HEUER logo on the upper part of the dial. It has become one of the brand’s most coveted watches,” according to TAG Heuer.

The new TAG Heuer Monza has the historic “Heuer” logo on the dial, and a similar layout, and the same font as the original, including a pulsometer and tachymeter scale. However, while still housed in a cushion-shaped case, the retro Monza has a slightly different shape and is larger at 42 mm in diameter (up from 39 mm). And instead of stainless steel, the case is now made of titanium. Moreover, the crown and pushers are all on the right side of the case now (similar to the reissue from 2000), whereas the original version has the pushers on the right side of the case and the crown on the left.

The case has a black titanium coating and features a mixture of brushed and polished surfaces. Providing a contrast to the all-black case and bezel are the crown and pump pushers which are in polished steel. Like the dial, the crown also reads “Heuer.” The screw-in case back is engraved with “MONZA HEUER,” and the limited edition number.

A black sunray finished dial makes a perfect background. Vintage style beige-colored lume is utilized for the hour and minute hands, as well as the printed hour indices. Red and white accents highlight the sporty nature of the timepiece while making it easy to read the time, especially the chronograph functions.

The watch is powered by caliber 17, a modern automatic chronograph movement that beats at 4Hz (28,800 vph), has 37 jewels, and a power reserve of 42-hours. Completing the sporty vintage racing look is a black full-grain leather strap with topstitching, and a black treated titanium clasp, engraved with the Heuer logo. Water resistance is rated down to 100 meters. (Ref. CR2080.FC6375) Retail is $5,200.

TAG Heuer borrowed many design elements from the 40-year-old version of the Monza and combined them with modern features. It will likely appeal to those who appreciate the history of Heuer, specifically before it became TAG Heuer. Ultimately, I like the current direction they are going with these Heuer re-editions, including the Carrera from last year. And I cannot wait to see how the tentatively planned 2017 Autavia turns out (especially considering TAG Heuer says they will design this model based on consumer input).