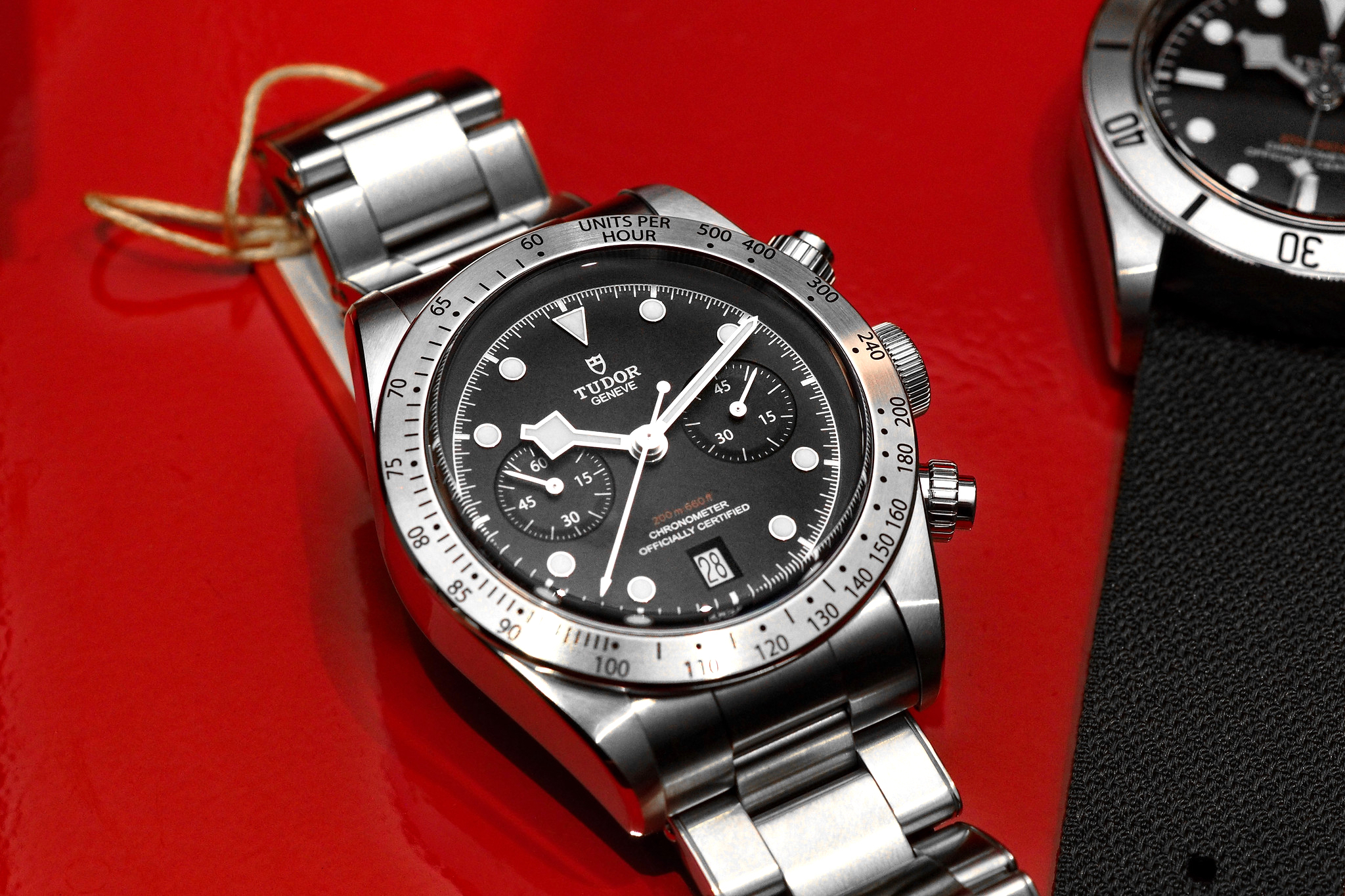 After setting the stage for the past five years with annual debuts of new variations to the three-hand Black Bay collection, which you can see in our archives, this year, Tudor, dropped their first Black Bay Chronograph.

Presented in the same size case, that measures 41 mm in diameter, and is available in stainless steel, the new Chronograph has a thinner fixed bezel, as opposed to the standard Black Bay line which is thicker and rotates unidirectionally. Plus, it is steel, which apart from the new Black Bay Steel, is completely different from all existing Black Bay models which are steel with a colored aluminum insert.

One design feature I personally like the most is the engraved tachymeter scale, which is reminiscent of a Rolex Daytona or 1970s Tudor Monte Carlo.

The design feature I like the least is the use of Snowflake hands. In fact, I don’t think I have spoken to a single person who agrees with this decision by Tudor’s design team.

That said, even though the launch definitely garnered a lot of negative reactions, there are a lot of reasons to consider this instead of whatever other chronographs you might be considering.

1- The Tudor Black Bay has a bigger wrist presence than the Daytona or original Monte Carlo, but it wears really well in person. It is worth noting that smartphone cameras can significantly distort the shape and size of the subject due to something called geometric distortion, so chances are if you saw an early smartphone image, it was distorted. Ultimately, in person, it seemed much smaller than I had expected based on the early images I saw on Instagram.

2- There is a very robust chronograph movement inside, not an ETA. And while Tudor did not manufacture the movement, uniquely, they collaborated with Breitling and so this chronograph is based on a manufacture Breitling B01, “with a high-precision regulating organ developed by Tudor with exclusive finishes, this movement is the result of a recent collaboration between the two brands, which here pool their expertise in the design and production of certain mechanical movements,” according to Tudor.

It is worth noting that are part of the collaboration with Breitling, which resulted in the new Tudor caliber MT5813, Tudor contributed one of their manufacture movements to Breitling (caliber MT5613), which powers the Super Ocean Heritage II.

3- The price. At $4,725 on a brown leather strap or $5,050 on a riveted stainless steel, this is one of the best prices you will find on a chronograph without an ETA movement inside. It has a robust Breitling manufacture chronograph inside, along with a silicon balance spring, COSC certification, and a 70-hour power reserve. Not bad at all.

As if that was not enough value, each model comes with an additional denim fabric strap, which in my opinion is the best looking way to wear that watch. Something about that combo makes it look smaller, and more like a Daytona. But to each their own.

And while I do wish more traits of the Daytona or original Monte Carlo, such as the dimensions, and vintage style, were present – Tudor got a lot right with the Black Bay Chronograph. Furthermore, if variations within Rolex and Tudor collections are any indicator, they could easily nix the Snowflake hands a year from now and introduce a refreshed look that will fully win over those in doubt. (Ref. 79350)