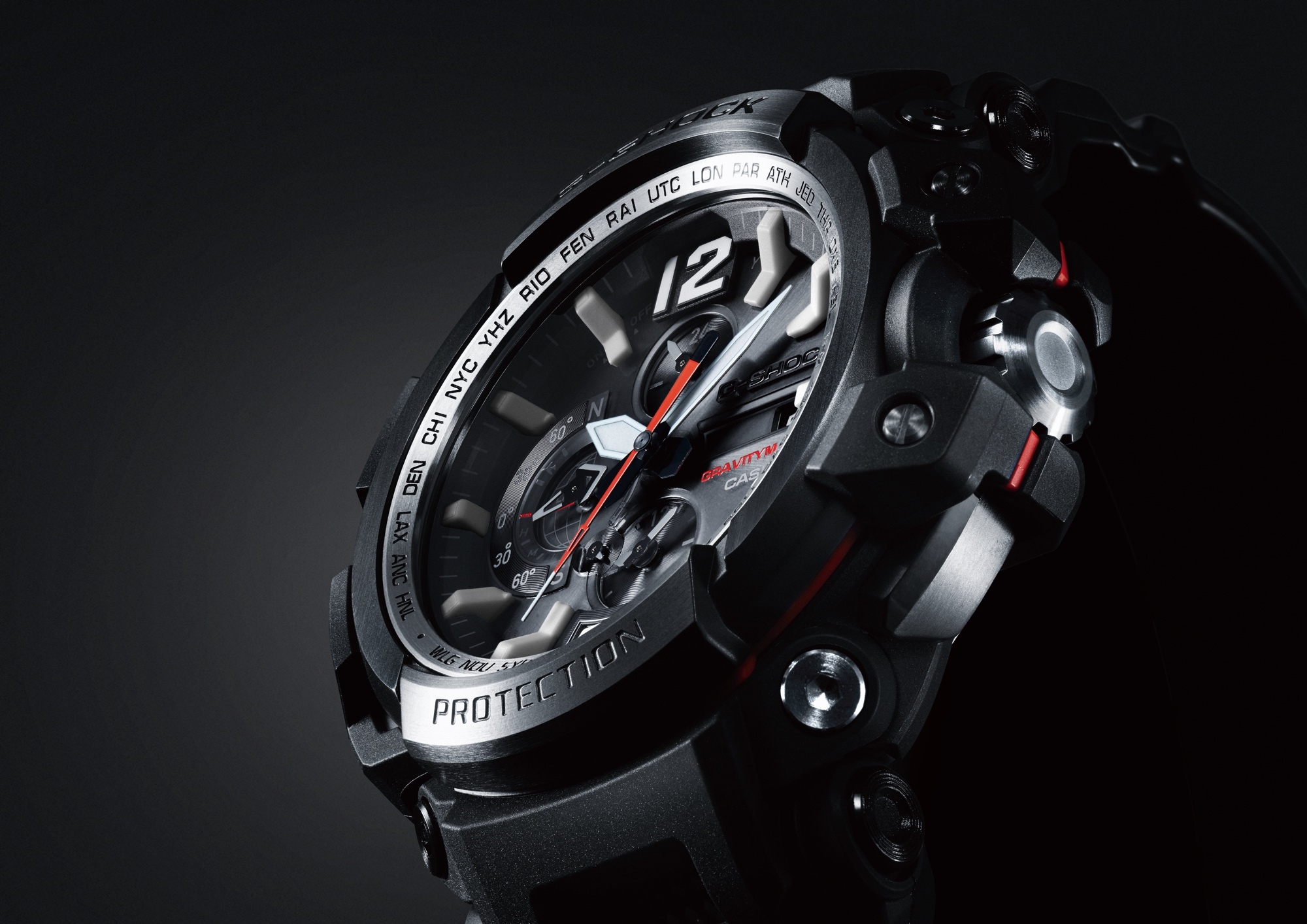 Highly accurate timekeeping is achieved by using three-time correction systems: terrestrial radio wave reception (Multi Band 6), GPS satellite signal reception and Bluetooth® transmission. The most appropriate system is selected automatically depending on the conditions, and the correct time is displayed for the current time zone anywhere in the world.

Using the G-Shock Connected Smartphone App, which was designed exclusively for the Gravitymaster, the watch and app connect for automatic time adjustment, as well as to provide the world time for over 300 cities, and to act as a digital flight log.

The case is shock-resistant, with carbon fiber-reinforced resin band structure. Fine resin parts (FRP) are installed at both ends of the band shaft and fixed with carbon FRP stoppers, strengthening the connections between case and band. Further, a high-rigidity fine resin frame supports the robust case.

An (ISO 764 standard-compliant) magnetic-resistant plate installed in the module prevents stoppage or shifting of the hands due to magnetic forces.

The dial is illuminated by a high-brightness LED (Super Illuminator) that ensures visibility in the dark.

A second disk, visible at the aperture located at 6 o’clock, is capable of displaying various functions such as the current mode and day of the week is installed in addition to the date display disk. And with the push of a button, the time display is switched to an inset dial at 6 o’clock and UTC (Coordinated Universal Time) is displayed in a window.

In addition to GPS timekeeping, when the GPS satellite signals are received, the current location’s latitude is displayed on an inset dial at 9 o’clock and the longitude in a window at 6 o’clock. The latitudes and longitudes of selected cities are also displayed when switching among World Time cities.

The Flight Log function of the aforementioned G-Shock Connected Smartphone App allows for logging of time point memories that are input by button operation (time stamp). Location information is obtained by a simultaneous connection to the smartphone and the point is marked on the map. The Flight Log is useful for reviewing travel history, including the point of departure, interim and final destinations, and return destination.

The watch is powered by a shadow-dispersing solar panel that is Casio says has superior power-generation efficiency.

Use of a carbon-fiber material with low specific gravity for the second hand made it possible to enlarge it while maintaining its impact resistance.

A high-transparency, abrasion-resistant sapphire crystal with a non-reflective coating is installed to ensure clear visibility.

The use of a carbon-fiber insert results in a tough resin band that resists cutting or tearing.

Six motors achieve drive the hands and disks independently. A disk at 6 o’clock and a disk in an inset dial are driven by two dual-coil motors, a system that enables original hand movements with speedier display times and varied hand movement speeds.

The Gravitymaster GPW2000 represents a technological tour de force of the G-Shock collection. The retail price is $800. Learn more at Casio. 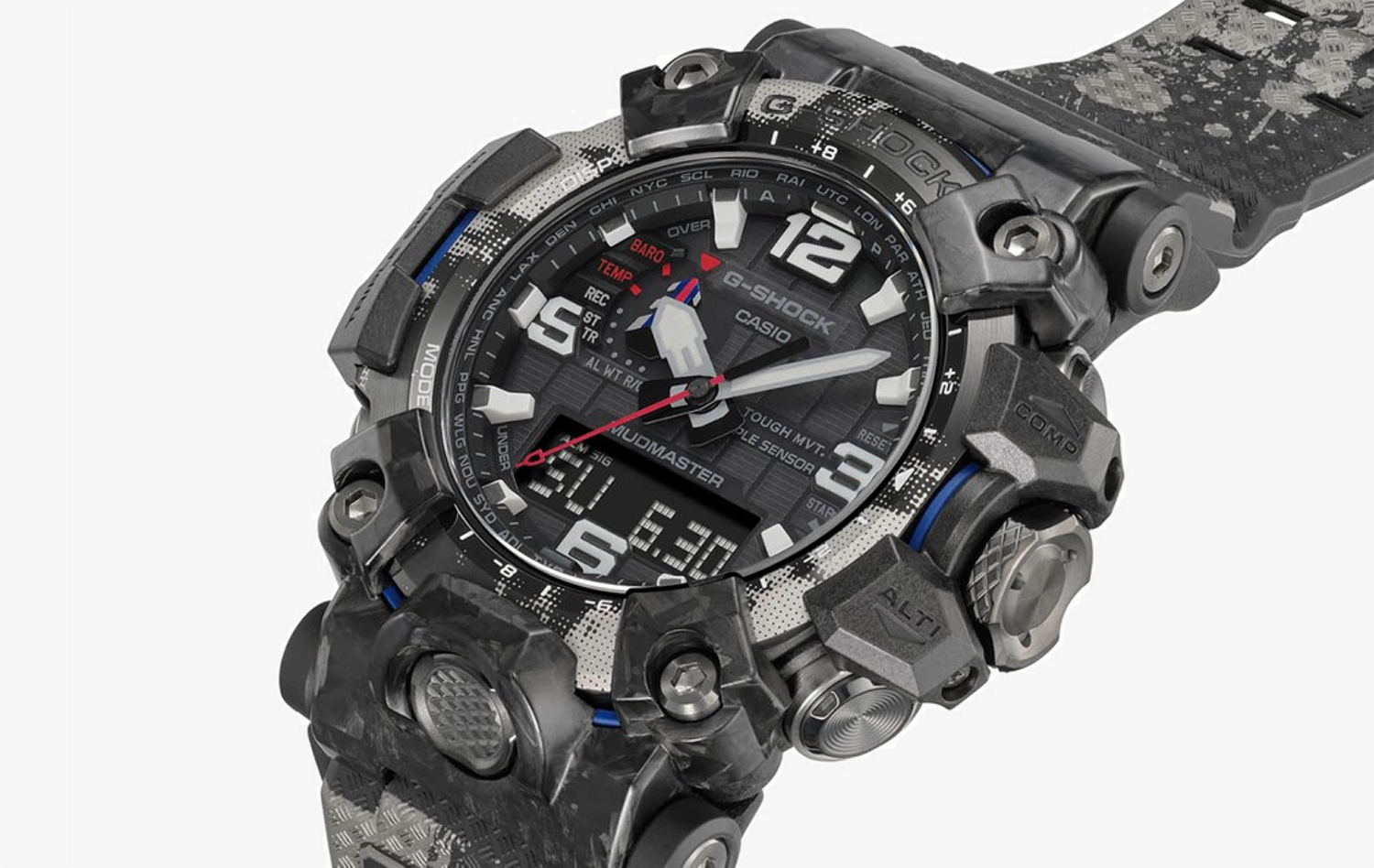 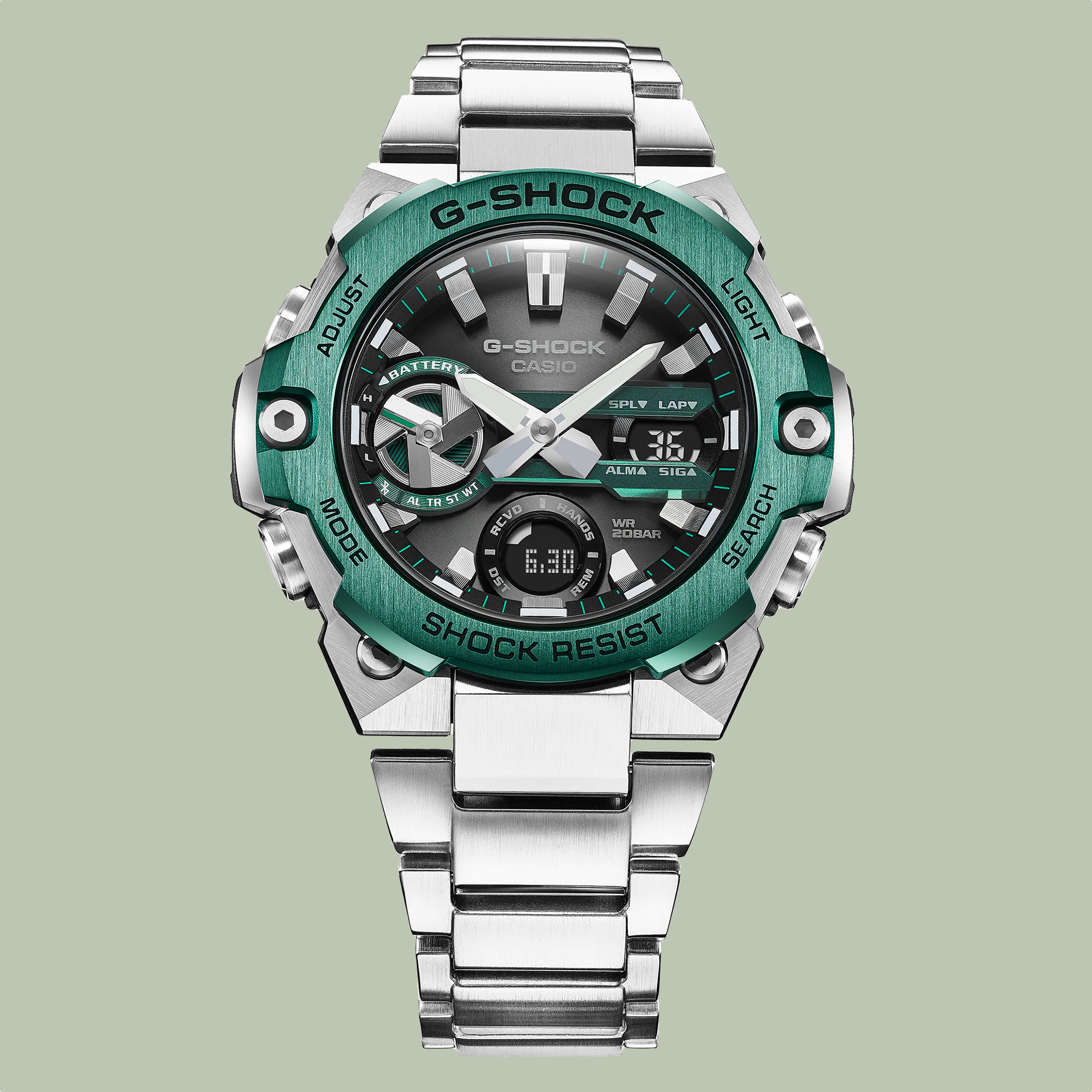