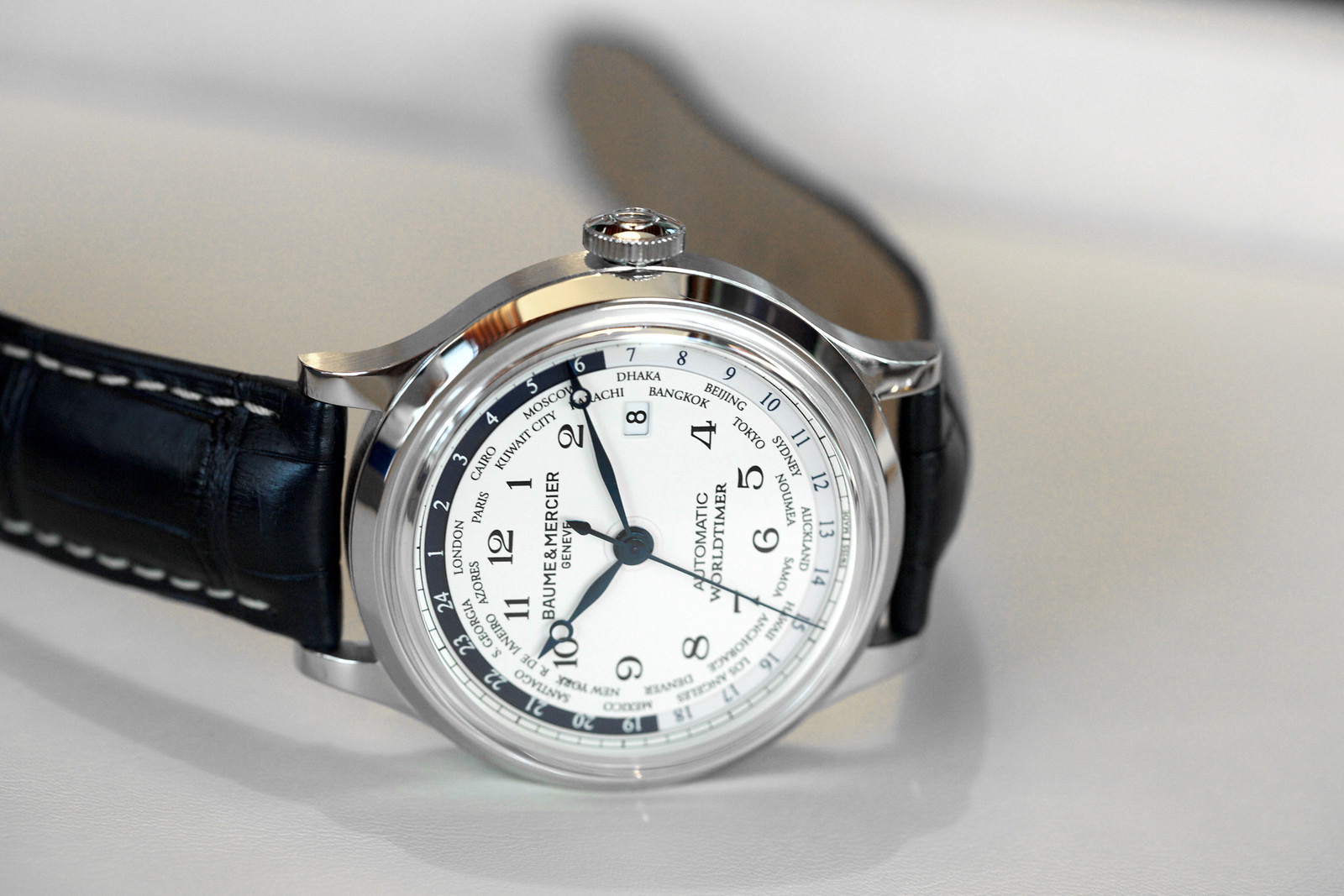 It is no longer the preserve of Intrepid explorers to circumnavigate the globe. More than ever before, a greater number of business professionals are conducting their working lives on a global stage, juggling their occupational duties across various territories and exercising due consideration for different timezones.

Worldtimers have been around since the early part of the 20th Century. Louis Cottier was credited with inventing a rotating disc that enveloped the dial, marked with various time zones. He worked with such horological aristocracy as Patek Philippe and Vacheron Constantin. However, in recent years this useful complication has migrated to more affordable timepieces with a greater stratum of society actually being able to consider acquisition.

Designs that resonate with me

Baume & Mercier have been on a roll of late. It seems that virtually all of the output from their Genevan-based design studios resonate with me. I find some of the brave contemporary timepieces, created by the latest generation of independent watchmakers, truly exciting. However, by way of contrast, there is something soothing with the pebble-shaped 1950s styled watches that Baume & Mercier draws upon for inspiration. The aesthetics of these models have been reinterpreted and distilled for a new audience.

This year, Baume & Mercier has crafted a broad range of models bearing the Clifton nomen, which is the headline act for 2013. The would-be buyer is provided with an array of complications, dial, and case choices. Moreover, with their attainable pricing, there is much to recommend them. However, the Genevan brand, whose lineage can be traced back to 1830, has also launched various other novelties to complement existing model lines such as the Linea and in this instance the Capeland. The Capeland has proved to be a popular model with its chronograph and flyback variants selling well in recent years and now the range has been expanded to include a world timer.

The stainless model is the pick of the bunch

Prospective purchasers are provided with a choice of a luxurious 18K red gold option or a stainless steel cased version. Although the red gold option is gorgeous with its ashen grey dial treatment and chocolate brown hue depicted on the rotating city disc, it is the stainless steel option at $7900 that is particularly appealing.

This model employs off-white on the dial with smatterings of blue on the date disc. The blued steel Breguet hands charmingly contrast with the dial canvas. The city disc offers ease of read-off and, despite the numerous details presented on the dial, does not appear cluttered. Central seconds and date display complete the ensemble of functions presented.

Admiring the caseback, the rear view of the Worldtimer is enhanced with a sapphire crystal. It allows the wearer to admire the self-winding movement within. This particular movement is sourced from within the Richemont Group and has several enhancements which attest to its quality. The bridges and plate are adorned with circular graining and the oscillating weight, decorated with Côtes de Genève motif, is open-worked, affording a greater view of the finishing beneath.

Case: 44 mm x 14.52 mm; water-resistant to 50 meters; sapphire crystal front and back; Richemont sourced automatic movement running at 4Hz, with 35 jewels and a power reserve of 42-hours; strap in brown or blue alligator leather presented on a pin buckle that matches case material.

There are many reasons to love both models within the range. With generous proportions, measuring 44 mm in diameter and by default, noteworthy readability, they are a particularly practical proposition. However, it is the keen pricing of the Capeland Worldtimer in steel which marks it out for particular praise.

Whilst, I have seen cheaper Worldtimers on the market, few of these can offer the same blend of handsome lines, evoke nostalgic feelings of a wholesome era and pack a comparable quality Swiss movement to match. Indeed, there is plenty to like about the Capeland Worldtimer. (Ref. MOA 10107 – 18K red gold / MOA 10106 – stainless steel)