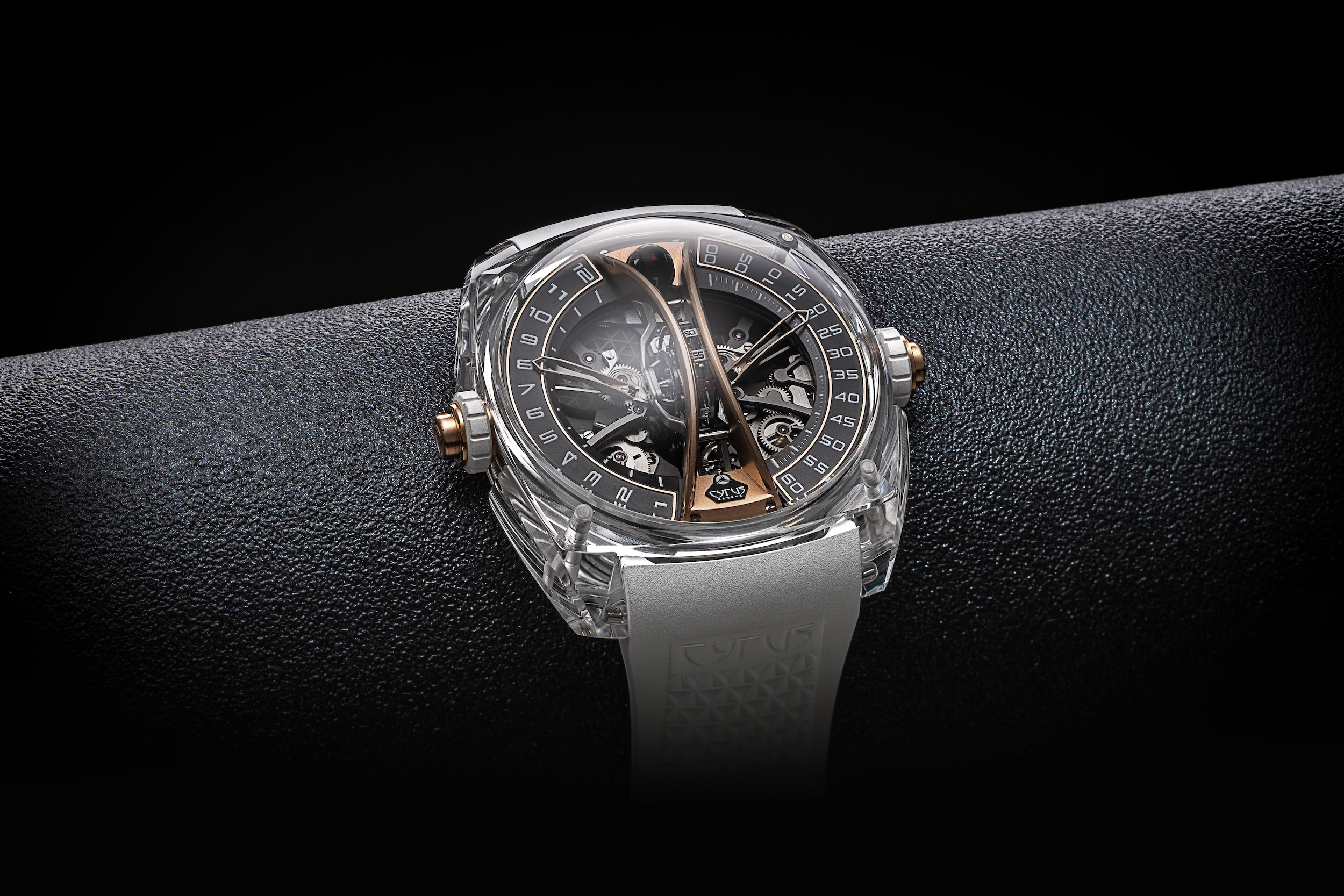 Following the release of the Klepcys Vertical Tourbillon in 2018, the complicated tourbillon timepiece designed by Jean-François Mojon for Cyrus is now presented in sapphire.

At nearly 20 mm, the case is very tall, to accommodate the vertical tourbillon and its 18K 4N gold arch-shaped supporting bridge, which runs from 12 to 6 o’clock. Split down the middle by the balance wheel, bridge, and tourbillon cage — the 90° “vertically-mounted” tourbillon completes a full rotation every 60-seconds and is marked 0-60 to act as a seconds display. On the left of the dial is a large skeletonized-hour hand which works its way up the retrograde hour track until it reaches 12 at which point it instantly returns to 1 and repeats. On the right, a large skeletonized hand starts at 00 and works its way down the retrograde minute track, and then once it reaches 60 it snaps back to 00 and repeats.

A dual crown design allows for easy control of the watch, with the crown on the left controlling the hour setting via a pusher, and the crown on the right is used to wind the movement in position one, and to adjust the time in position two. Flip the watch to the caseback and you’ll see the two barrels, mounted in parallel, which store up to 100-hours of power reserve (just over 4 days). Flip the watch back to the dial, and at the top, you’ll see a 5 mm black DLC micro beaded sphere marked with 1-4, which is a power reserve indicator that shows how many days of power are remaining in the dual mainspring barrels.

The Klepcys Vertical Skeleton Tourbillon Sapphire case is water-resistant down to 30 meters and is paired with a white rubber strap with an embossed prism pattern and is secured to the wrist with an 18K 4N rose gold folding buckle decorated with the Cryus logo. This latest timepiece celebrates the 10th anniversary of CYRUS and is a limited edition of just 10 pieces, with the engraved inscription “10 years CYRUS – Est. 2010” on its sapphire crystal case back. (Ref. Ref. 539.506.ZG.A)