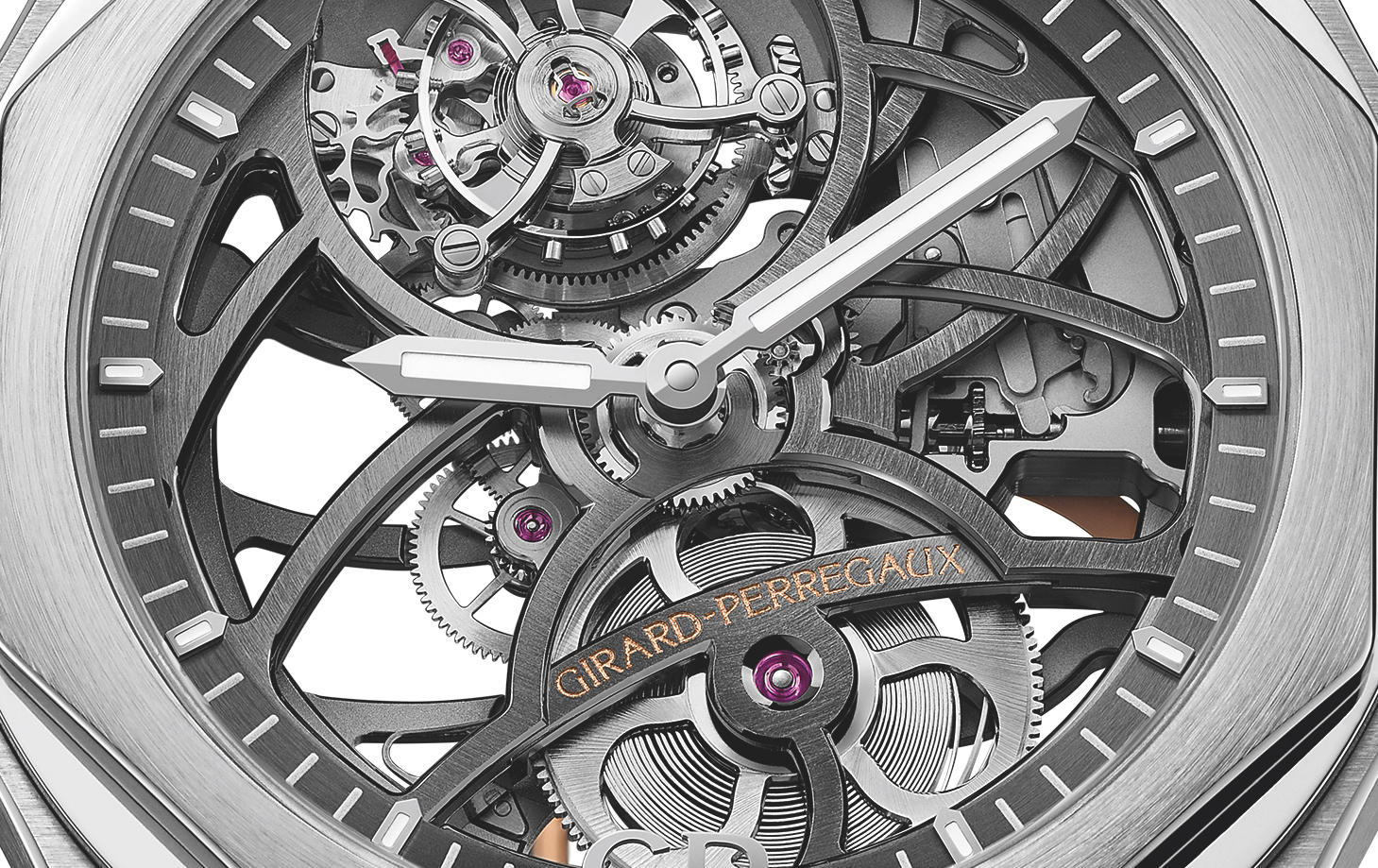 Building on a rich history studded with original creations, Manufacture Girard-Perregaux constantly rethinks its horological approaches in creating bridges spanning past, present and future. A direct descendant of the original model launched in 1975, the Laureato Flying Tourbillon Skeleton features a graphically designed mechanical self-winding movement openworked in the extreme. The Laureato Flying Tourbillon Skeleton thereby reveals the full extent to which its powerful architecture embodies the values and aspirations of an entire generation in quest of perfection.

Firmly committed to anchoring its vision of traditional horology firmly in the future, Manufacture Girard-Perregaux continues to hone its new contemporary watchmaking image by offering enthusiasts a range of instruments which, like the Laureato Flying Tourbillon Skeleton look beyond the present while remaining attuned to its history that began in 1791.

The inherently daring Laureato, with its distinctive aesthetic accentuated by its graphic octagonal bezel, is an acknowledged pioneer in the field of major watch designs. Moreover, this icon with its pleasing exterior harbours a less well-known asset in the form of its natural penchant for timekeeping perfection. Initially launched in 1975 with an ultra-precise quartz heart vibrating at an original oscillating frequency (32,768 Hz) that has since become the industry standard, the Laureato was one of the most high-performing wristwatches of its time. Pursuing the same quest for excellence in accordance with the historical approach cultivated by the Manufacture, the watchmakers responsible for designing the Laureato Flying Tourbillon Skeleton have opted to clothe this reference with a 42 mm-diameter case made of 18K pink or white gold, combined with a supple bracelet in the same metal with a resolutely contemporary design. This seamless ensemble, graced with structure that remains instantly identifiable even from a distance, is equipped with a magnificent Manufacture mechanical self-winding calibre featuring a flying tourbillon regulator.

A blend of power and lightness

So as to reveal its finesse while recalling that transparency is another aesthetic code cherished by the company since its earliest days, the artisans of the Manufacture have fitted inside the meticulously polished and satin-brushed case middle a large-size GP09520-0001 calibre of which the mainplate, bridges and the oscillating weight of the automatic winding system have all been painstakingly openworked. This elegant ‘skeleton’ work, of which the delicate finishing visible from the front as well as through the sapphire crystal case-back, is hand-crafted by experts. It enables observers to look deep into the very core of the mechanism and explore most of the 262 components of this Manufacture-made beating heart.

The captivating contemporary design of this movement, hand-crafted in keeping with the highest standards, is cleverly accentuated by the bevelled edges of each part making up this mechanical composition that appears to be levitating inside the case. Finally, to highlight the stature of this movement as a fascinating kinetic sculpture, the dial is pared down to the absolute minimum in the shape of a chapter ring with applied gold hour-markers and logo. This minimalist decor, combined with a black PVD treatment of the fixed elements of the calibre, enhances the visual perfection of the going train and ensures the flying tourbillon enjoys pride of place in this stage-setting occupying just a few square centimetres.

With its ideal proportions, its arresting design distinguished by extreme legibility and pared-down aesthetics, matched by captivating transparency, the Laureato Flying Tourbillon Skeleton establishes itself as the flagship model of the Laureato collection, naturally reinforcing its coherent nature and its wealth of diversity.