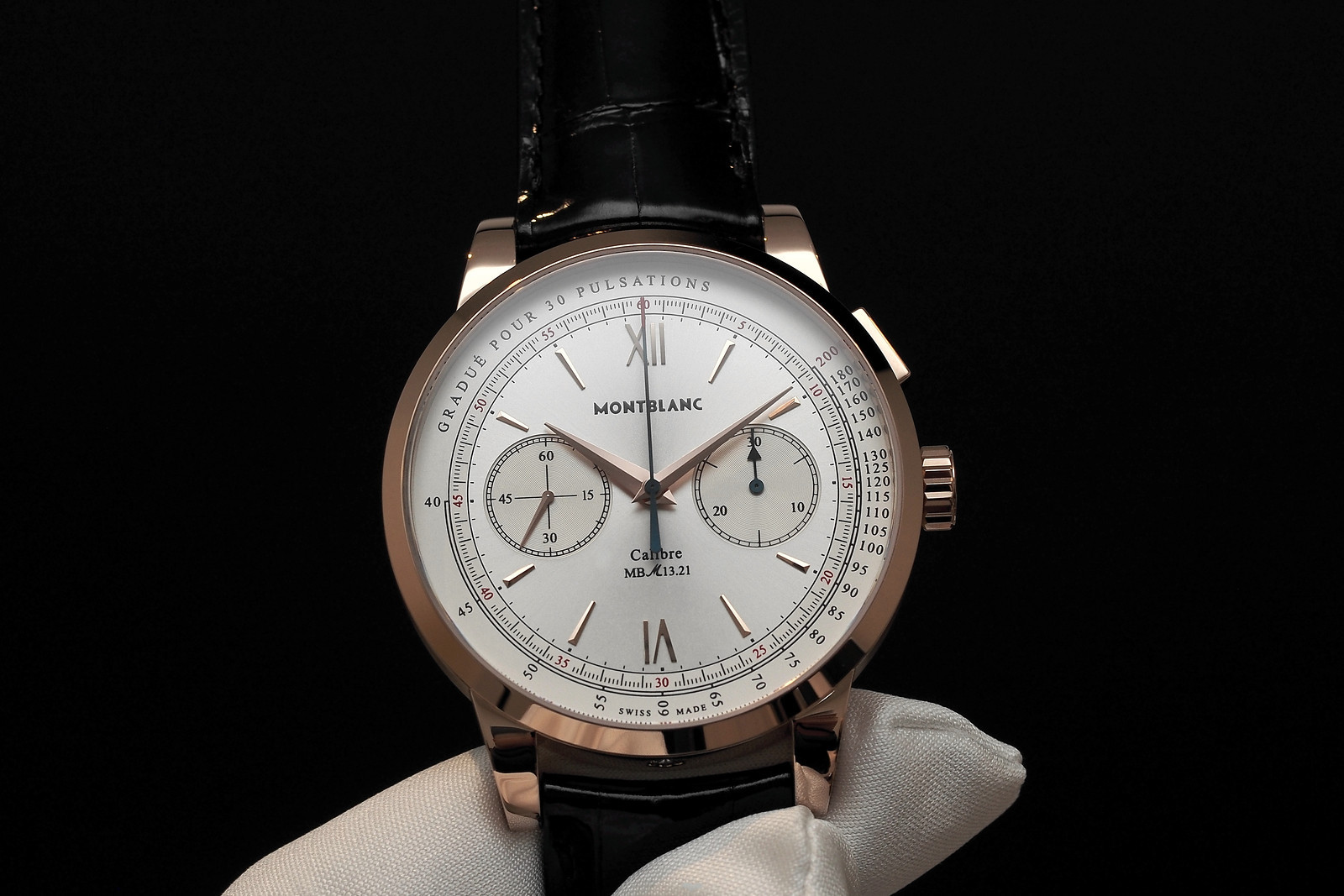 This week at SIHH, Montblanc introduced a very cool new watch that pays homage to the brand’s Meisterstück fountain pen from 1924, as well as showcasing the expertise of the watch manufacture Minerva.

To celebrate the pen’s 90th anniversary, Montblanc worked with Minerva to create the Meisterstück Heritage Pulsograph. A chronograph “pulsometer” scale enables a doctor to read the pulse rate per minute without having to continue feeling the patient’s pulse for a full sixty seconds. (For reference, the manufacture Minerva was acquired by the Richemont Group in 2004 and is currently managed by Montblanc.)

The pulsometer scale is printed on the perimeter of the dial and is calibrated for 30 pulse beats, with subdivisions for each tenth and fifth pulsation along a railroad-style track. This scale surrounds the chronograph’s elapsed-seconds scale, which is subdivided into fifths of a second.

The caliber 13.21 is based on the historic Minerva caliber 13.20, which was first manufactured in 1924. Like its predecessor, the 13.21 has a column wheel and horizontal clutch and is activated by a mono-pusher (meaning the start, stop and reset of the movement is done via one button – located at 2 o’clock). It features an in-house balance and balance spring, with a balance cadence of 2.5Hz. It is fabricated, finished, and adjusted by hand, to the highest Haute horology standards.

According to Montblanc “All functional planes are individually and manually adjusted in each movement to maximize the smoothness and reliability with which the button triggers the commands. Similarly, luxurious finishing has been lavished on all other components of the movement. The plate and bridges are fabricated from rhodium-plated nickel silver; the bridges are beveled by hand, and these chamfered surfaces are then manually polished.

Classical Geneva waves embellish the planar surfaces. The V-shaped chronograph bridge is an eye-catching and characteristic feature: inspired by its counterpart in Minerva’s legendary chronograph Calibre 13.20, its inner angles are a symbol of traditional horological craftsmanship that no machine, no matter how modern it may be, could possibly imitate.”

Minerva was founded in Villeret, Switzerland in 1858, and is widely considered among the best movement makers, especially their chronographs. Moreover, it is a nice touch that while this is a Montblanc branded timepiece, the chronograph bridge is adorned with the words “Minerva Villeret.” A nod to the fact that this is far from your typical Montblanc timepiece.

The Montblanc Meisterstück Heritage Pulsograph comes in a 41 mm case in 18K rose gold and it will be available in the fall of 2014 in a limited edition of 90 pieces. The price is $34,500.