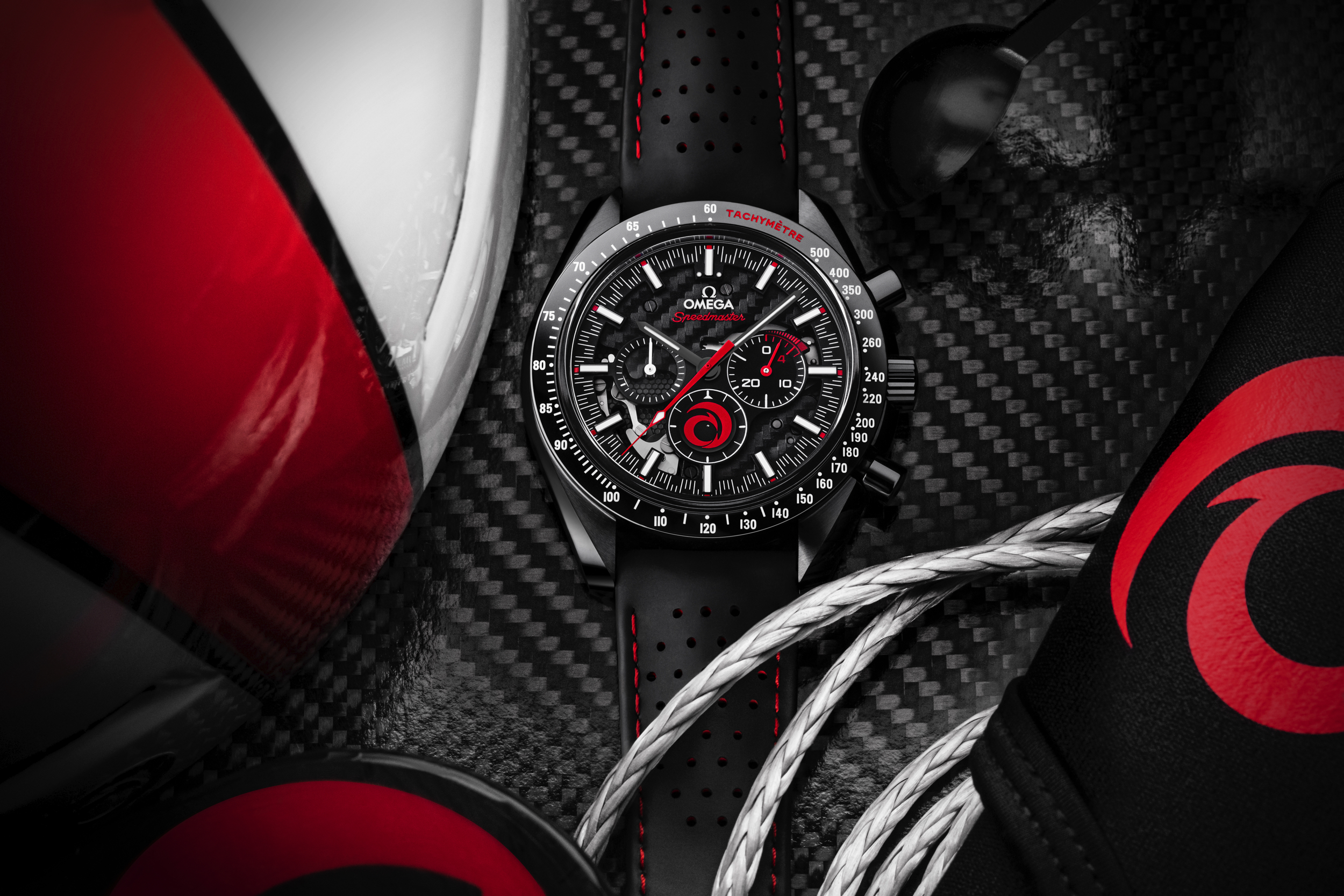 The Speedmaster Dark Side of the Moon Alinghi

Omega announced a new chronograph as part of its new partnership with the Swiss sailing team Alinghi this morning.

In the context of creating special wristwatches designed for watersports, Omega typically sticks with its Seamaster line of watches such as this one which has a regatta timer. They have made sailing Speedmasters in the past, such as the Speedmaster X-33 Regatta, which has a regatta timer, although only 30 meters of water-resistance. Unusually, for the Alinghi Team timepiece, like with the X-33 Regatta, a departure from the Seamaster was made in favor of the very capable yet far less water-resistant Speedmaster.

Introducing the 2020 Speedmaster Dark Side of the Moon Alinghi.

Similar to the Dark Side of the Moon Apollo 8 that was introduced in 20XX, this watch comes in a black ceramic [ZrO2] Speedmaster case measuring 44.25 mm x 13.80 mm, has an open-worked dial, and is powered by an aesthetically modified Omega caliber 1865.

The manually-wound 3Hz, 19-jewel caliber 1865 movement, uniquely, features a laser-etched “honeycomb” design on the blackened mainplate and barrel bridge. Subtly contrasting this are blackened “carbon” effect laser-etched bridges. Together, the aesthetic is quite distinctive, both when viewed through the sapphire caseback, or via the cut-outs on the dial side.

On the dial, at 6 o’clock, the traditional subdial design has been replaced with a sandblasted and anodized aluminum disc, which features the Alinghi logo transferred in red (the logo rotates slowly when the chronograph is in use as this is the 12-hour counter). At 3 o’clock, a 4-minute or 5-minute tactical time display has been included in red (although this is not a regatta countdown timer as you often see on sailing watches).

A red varnished chronograph hand with a luminous diamond tip counts the chronograph seconds. The traditional Speedmaster hour and minute hands have been blackened and are luminescent as well. Lume is also used for the applied baton indices, and even on the tachymeter scale. Red varnish further accents the word “TACHYMETER” and each of the hour markers with a small square accompanying each baton index.

The Alinghi logo is emblazoned with red varnish on the start/stop pusher at 2 o’clock, while the standard Omega logo is laser engraved on the crown. “TEAM ALINGHI” is also engraved on the caseback, along with “DARK SIDE OF THE MOON.”

Omega’s Speedmaster Dark Side of the Moon Alinghi comes with a perforated matte black rubber strap with a red rubber interior and red contrast stitching.