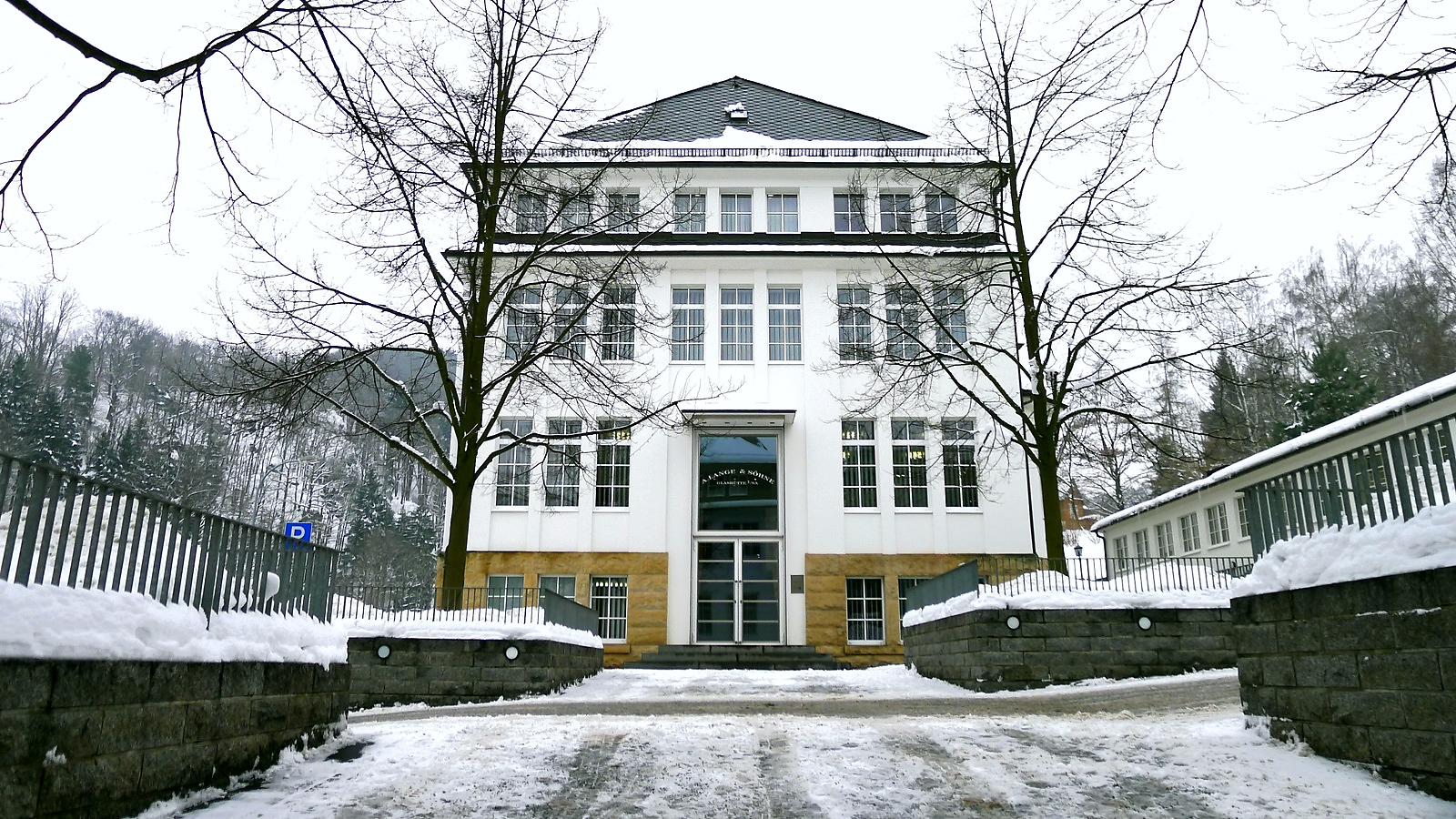 To begin the celebration, Lange hosted a Gala dinner inside the Royal Palace of Dresden. It was the perfect historic setting, as Saxony is famous for monumental buildings, such as the Royal Palace, and magnificent art collections, which could be seen on the walls of the Royal Palace. Jerome Lambert (CEO of Jaeger-LeCoultre), William Schmid (CEO of A. Lange & Söhne), and Walter Lange (original ancestor of Ferdinand A. Lange) gave speeches, along with a number of other speakers who were important to Lange’s re-establishment.

The following day, Lange held a press conference at their headquarters, about 30 minutes from Dresden, in the small mountain town known for German watchmaking, Glashütte. In the manufacture showroom, Anthony De Haas, Director of Product Development, gave a technical demonstration of the watch movement (video here). He and Walter Lange, then unveiled the newest complicated timepiece in the collection, the Richard Lange Tourbillon “Pour le Mérite” (seen here). This was then followed by a chance to view the actual watch up-close.

Later in the day, we had a chance to do a tour of the manufactory. We were able to visit the testing and quality control department, a number of finishing departments (they have 50+ watchmakers dedicated just to finishing), the CNC department, and the final assembly department.

The A. Lange & Söhne manufactory and headquarters is situated in the small mountain town of Glashütte, Germany. “On 7 December 1845, Ferdinand A. Lange established the first production facility for pocket watches in Glashütte and began to train 15 young people from the impoverished region with the aim of turning them into accomplished watchmakers.”

Currently, Glashütte includes 10 watch factories, 3 of which are considered true “manufactures” (A. Lange & Söhne, Glashütte Original, Nomos Glashütte). Glashütte was bombed by the Allied forces during the end of WWII, along with Dresden. And like in Dresden, the buildings in Glashütte, including the watch factories, were all destroyed.

After this, A. Lange & Söhne was closed, until 1990, after the German reunification, when Günter Blümlein and Walter Lange worked together to resurrect the famous Lange watch brand. December 6th, 2010 – 20 years later and 165 years after A. Lange & Sohne was originally founded (1845), Lange and the town of Glashütte are thriving again.

And now, the timepieces coming out of A. Lange & Sohne’s Glashütte manufactory, are considered by watch collectors and experts to be among the finest in the world. Just take one look at the finishing of their movements, and I think you’ll agree.

The uniform stripes of the Glashütte ribbing pattern decorate the three-quarter plate and the caseback sides of the bridges of a Lange caliber. They are produced by a slightly inclined, rotating grinding wheel that is guided along with the component in straight, parallel lines. (Glashütte ribbing is also known as Geneva Stripes or Côtes de Genève.)

The spiral arms of Glashütte solarisation constitute a decorative finish applied principally to mainspring barrels and other larger round sur-faces or wheels. The pattern is produced by rotating the part and the grinding wheel in opposite directions.

Perlage is applied to the inside surfaces of plates and bridges as well as on the invisible dial side of the main plate. The cloudlike decoration is generated with a rotating abrasive peg that only briefly stipples the component. Perlage progresses from the outside to the inside of a part, and each stipple overlaps the previous one.

Straight graining is a finish applied especially to steel clicks, springs, and yokes. This type of decoration is produced with abrasive paper across which the part is drawn in a longitudinal direction. The technique calls for straight but cautious movements to assure that the delicate linear pattern is applied even to the furthermost corners of the component.

Smaller wheels are finished with circular graining. The regular circular contours are produced when the part is rotated on abrasive paper.

Circumferential polishing is used to embellish the vertical edges of the frame elements of a Lange movement. The finish is applied with a rotating abrasive peg. The part is manually pressed against the side of the abrasive peg.

Movement Engraving
For several generations, the engravings of the balance cocks, tourbillon cocks, and intermediate-wheel cocks have been based on the same motif: it consists of flower petals that surround the central screw of the cock and a floral pattern that subtly follows the characteristic outlines of the component to which it is applied.

But at the same time, every engraving is unique. The depth of the cut and the curl of the lines are like an inimitable fingerprint – a personal signature that sets each individual timepiece apart from all others.

Movement Polishing
Up to two hours of precision work are needed to mirror-polish the surfaces of a whiplash spring, the endpiece of an escape wheel, and other parts of the movement. To flat-polish a component, the finisher presses it into the pith of an elderberry shoot and guides it in figures of eight on films coated with progressively finer diamond powder.

This process requires the utmost in concentration. Even a tiny grain of dust between the part and the polishing film, or excessive pressure on the part, can wipe out hours of work in a second.

Only very few and select parts are decorated with the intricate specular polishing technique, among them the tourbillon bridge of the TOURBOGRAPH “Pour le Mérite”. This process can take several days. Using special abrasive pastes, the respective parts are manually polished on a zinc or tin plate until they appear to be black at a certain angle of light.

At A. Lange & Söhne, all of the edges of plates, bridges, and levers are chamfered, a process that involves both beveling and polishing. Lange’s finishers demonstrate their skills by producing chamfers with a consistently uniform width and angle on virtually every edge in a movement that is finished with this technique.

The bevels are also polished entirely by hand. Movement parts made of softer materials are pre-polished with progressively smoother rubber tools and then finished with a polishing brush. Harder steel parts are polished with a rotating wooden wheel.

The degree of perfection of a timepiece comes to the fore in discreet but salient details. Connoisseurs look for them first: the internal angles of bridges and levers. If they are precisely defined and straight, they are unquestionably polished by hand, because only a human hand can execute the linear polishing motion needed to obtain such a result. If the internal angle is rounded, it is justifiable to assume that it was machine-finished.

Lange’s finishers use a pencil-like hard metal tool to polish internal angles. They cut and finish such angles entirely by hand.

During the initial assembly phase, the complex mechanisms of each caliber – some with up to 556 parts – are put together with temporary assembly screws and carefully adjusted to assure the perfect interaction of all components.
The most challenging operation is to optimize the basic settings of Lange chronographs. This is because even the highest degree of accuracy in parts production is not sufficient to assure the harmonious interaction of all the elements of such complex mechanisms.

This process requires the virtuosity and in-depth knowledge of Lange’s master watchmakers. The most experienced among them are specialized in manually tweaking chronograph movements to perfection.

No matter how much care is exercised, it is not possible to preclude that a part may be slightly scratched while it is being adjusted. This is why after initial assembly, the perfectly functioning movement is totally taken apart again and cleaned. Only now are many of the delicate components embellished with traditional decorations, engravings, and polished finishes.

Finally, the meticulously decorated parts of the movement are cautiously assembled for the second time. The temporary assembly screws are now replaced by immaculate blued screws. Each part is lubricated with a specified oil or grease. Then, after the movement has been precisely adjusted, it is paired with its platinum or 18-carat gold case.

Whether it’s in German watchmaking or Swiss watchmaking, A. Lange & Söhne sets a very high standard. All of their movements not only go through being assembled twice; they are also tested at extreme temperatures and against extreme gravitational forces. The movements are tested for timekeeping accuracy as well, and all movements keep very consistent rates to within a few seconds per day. Read more about Lange testing here.

A. Lange Söhne is among only a handful of watch manufactures who can create a hairspring, the heart of a mechanical watch, in-house. Production of hairsprings is a very delicate and complicated process, and accordingly, not all Lange timepieces feature a Lange hairspring (also called balance spring). Unfortunately, we did not have time to see this operation, but maybe next time.

In between Lange’s two main buildings

Summary
Whether it is the 165 years of Saxon heritage the brand brings, the exquisitely finished movements that rival the best in the world, the beautiful German silver baseplates, the precious metal cases (Lange only offers gold and platinum cases), the assurance that you are getting a truly handmade work of art, or knowing that your purchase and after-sales service will be handled with the utmost care — you can be sure that if you do buy an A. Lange & Söhne watch — it will be one of the best hand-finished timepieces you’ll ever own.