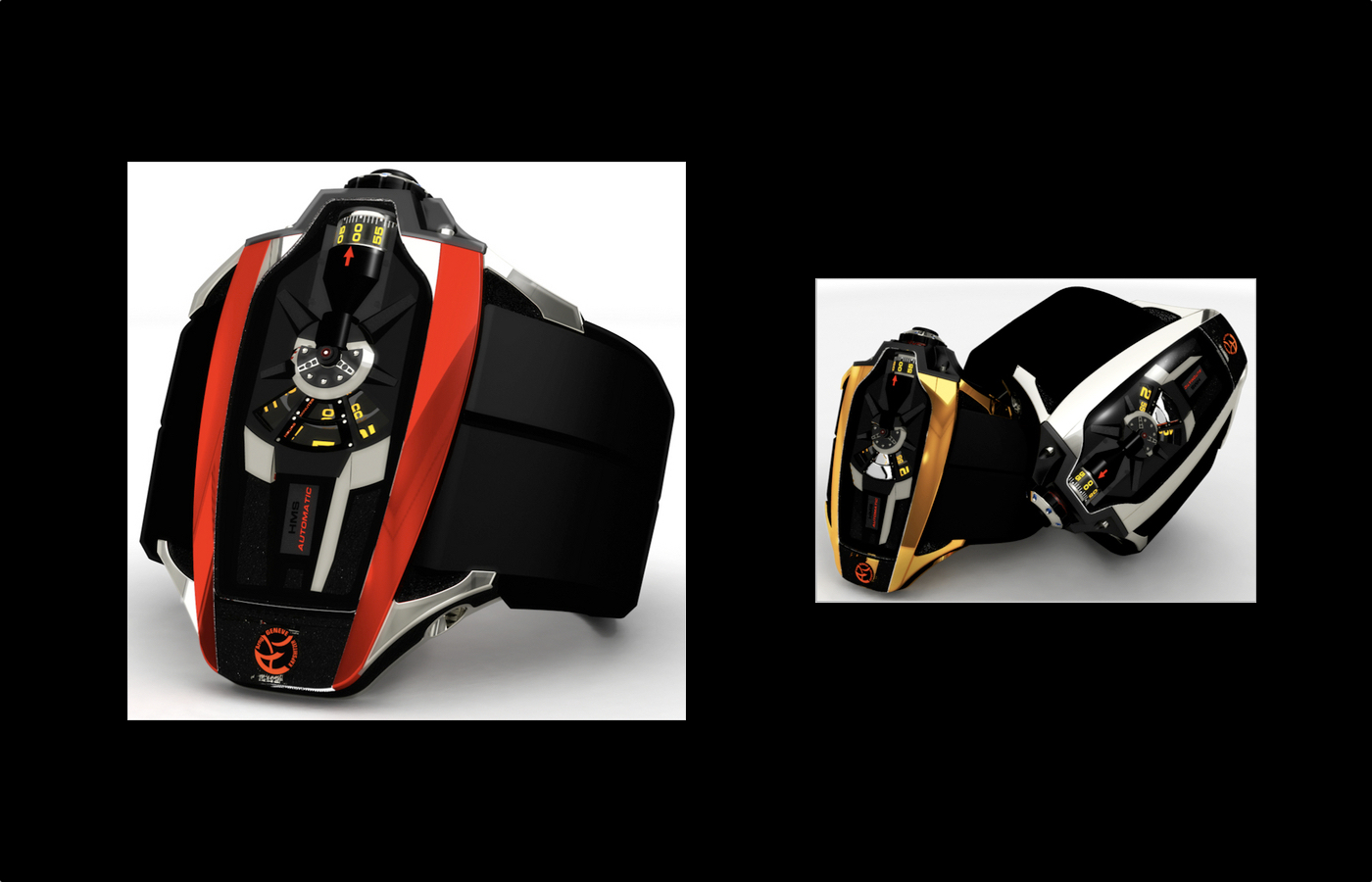 Knowing Arny Kapshitzer and his unconditional love of the 1960s science-fiction series, one understands more easily why he chose to give the case of his watch a shuttle shape, which creates an impression of speed. This elongated case has been designed to form an extension of the arm, thereby displaying a rare harmony for a watch of this size. Space shuttle or tortoise, when one looks at it from above with its asymmetrical horns and its crown, one has to admit that the watch also looks like a beetle. And an ergonomic beetle what’s more.

Since the arm is always slimmer at the wrist joint, the watch is, therefore, thicker on the crown side. “It’s a grand complication case”, Kapshitzer likes to say, “as the middle-piece is made entirely of compressed carbon fiber, the unusual formulation of which makes the case both very shock-resistant and very light. It takes up to 25 minutes to machine it, compared with only three for most conventional middle-pieces”.

Moreover, carbon fiber makes it possible to use other materials such as gold, for example, for the shaft and the bezel. Being asymmetrical and more spaced-out on the crown side, the horns guide the lines of the watch so that it fits more snugly with the shape of the arm. Attention to detail has prompted the designers to screw on the 15 pieces of the case – using a total of 34 screws. And the crown consists of 20 pieces, all of which are “useful”. Finally, the seals, which are guaranteed for 50 years, are made of the same rubber as the bracelet.

Glass
Cut flush with the asymmetric middle-piece and profiled to fit the very special interior design of the case, the convex glass was a real nightmare to make. “You should make it shorter, this bit serves no purpose!”, is the remark that Arny Kapshitzer heard most frequently. That’s probably why he wanted so much to keep it, this famous “bit” of glass that gives the watch its characteristic shape, despite the extreme complexity of manufacturing it.

Dial
It looks like something straight out of the Star Trek series, uncannily reminiscent of the starship Enterprise. Located eccentrically towards the right of the dial, a cut-away metal piece reveals the jumping hours and minutes on two superimposed discs. The seconds are displayed at 3 o’clock on a cylinder linked directly to the crown. 9 o’clock forms the tail of the “spaceship”. Made of the same metal, it bears the name of the watch and is punctuated by a totally off-center dot, where the brand logo is engraved.

Movement
The basic automatic movement is the Time Engine 001 (the 00 is the coaxial movement in preparation), made in cooperation with Concepto. Operating at 28,800 vibrations per hour, its oscillating weight is made of iridium alloy with a carbon-fiber plate. The telescopic crown, which is not screw-on but has a bayonet fitting, is mounted on a titanium shock-absorber and directly linked to the movement.

The jumping hours and minutes module and the seconds module on the cylinder, on the other hand, are proprietary. Nothing is superfluous here: all the pieces, which are interlinked, are useful. Although its design is complicated, this movement is simple and reliable to use. It benefits from a chamfered, a micro shot-blasted and satin-lustered finishing.

Bracelet
The quest for materials has been taken right down to the bracelet. Made of perfluorinated, hypoallergenic rubber that resists all acids, it is more expensive – but also unique and much more reliable over time – than the vast majority of rubbers currently available. In addition, the clasp is recessed into the inner surface of the bracelet (an innovative system on which a patent is being filed), so as not to injure or impede the wrist. Better still, with this clasp and the profiled case, the watch becomes an integral part of the wrist.