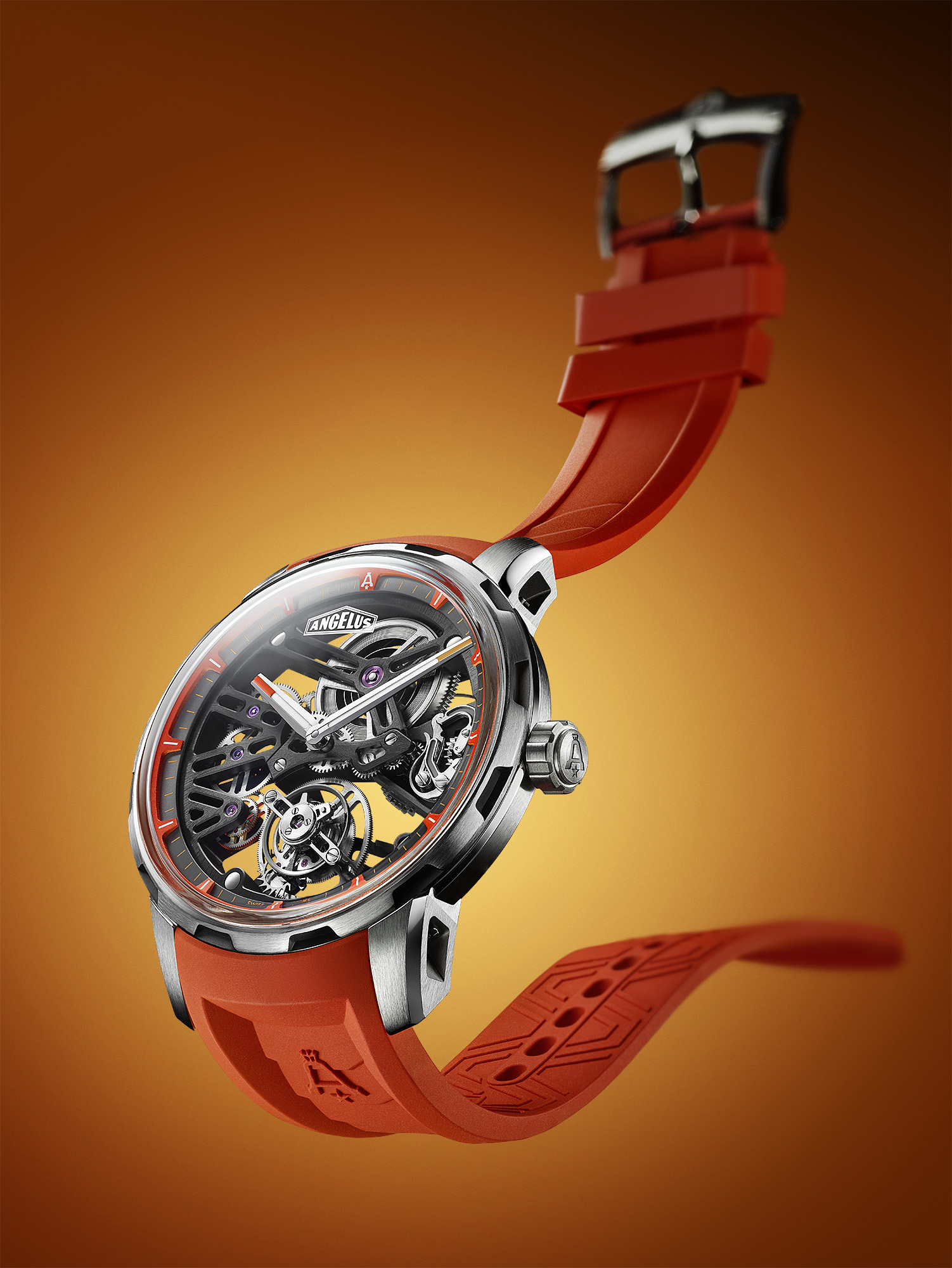 Perhaps as a sign of the current times, you receive a flying tourbillon and a highly skeletonized movement — made in Switzerland — for under $35K. There were no precious metals used, but it still makes six-figure tourbillons seem way overpriced. Perceived value, is, of course, a large factor in getting consumers to part with enough money to buy a car or a house — for an unnecessary item that goes on your wrist.

The Angelus U41 Vibrant Structure Tourbillon Skeleton features central hours and minutes, as well as a 60-second flying tourbillon (which means the rotating tourbillon cage is only supported on one side to give a better view of the oscillation of the regulation system). This particular tourbillon does complete a full oscillation every 60 seconds, although since there are no markings, you cannot tell exactly once every minute passes, except by looking at the minute hand.

Beyond the visual treat of a tourbillon, technically speaking, the cage spins around continuously to prevent the negative effect of gravity on the balance wheel, balance spring, and escapement, thus improving the rate of accuracy and amplitude.

“Angelus was seeking to create a light, yet sturdy watch. This pressing need for solidity requires a movement architecture that is capable of withstanding impacts and cushioning shocks without breaking or being deformed. A compromise between flexibility and rigidity. By enclosing all the main elements, including the wheels and the barrel, between two plates, the movement delivers maximum stability,” according to the manufacture.

Designed and developed in-house, the caliber A-300 is a 4Hz hand-wound mechanical watch movement measuring 32.80 mm x 4.30 mm, with 23 jewels, and a 60-hour power reserve. Interestingly, Angelus has pointed out that the movement frequency was increased from 3Hz to 4Hz to prevent against impacts, but the downside is the power reserve is reduced from 90 to 60 hours. Still, 60 hours is more than a lot of movements offer, even with no tourbillon drawing power.

The caliber A-300 was designed as a skeletonized movement, from the start — not after the fact — the way many skeleton watches have been developed. This is beneficial as it was engineered with a dual-beamed plate and bridge design to provide strength despite the mainplate and bridges being reduced down to a minimal amount of materials. The void that separates the two arms from these supporting elements is studded with jewels that accommodate the wheel axes. Each of the bridges and the mainplate have been treated with an ADLC coating to add contrast to the dial, which is important because skeleton designs often lose focus on telling the time well.

Finishing on the mainplate includes chamfering and polishing. And the bridges and wheels are decorated the same way. The tourbillon carriage is also chamfered, although finished with a mirror polish to further set it apart.

The dark gray chapter ring (flange) around the edge marks the minutes (with yellow hash marks). A vibrant orange or blue-colored ring on top of the flange marks the hours. Steel, centrally mounted, flat-tipped hands, with a yellow-tipped minute, and orange or blue coordinated hour hand, indicate the current time.

A notched bezel, with a circular-grained surface, and a slightly domed sapphire crystal, protect the dial side of the watch. The case flanks feature straight-grained brushing and the lugs are short and articulated and have been hollowed out — with polished bevels — providing a contrast to the mostly matte surfaces of the case. The Angelus emblem is engraved in the crown.

A rubber strap, with a grade 5 titanium pin and buckle, in the same color as the dial accents, completes the sporty look of the Angelus U41 Vibrant Structure Tourbillon Skeleton. (Ref. U41: 0TSBT.O01A – orange, Ref. U41: 0TSBT.U01A – blue)