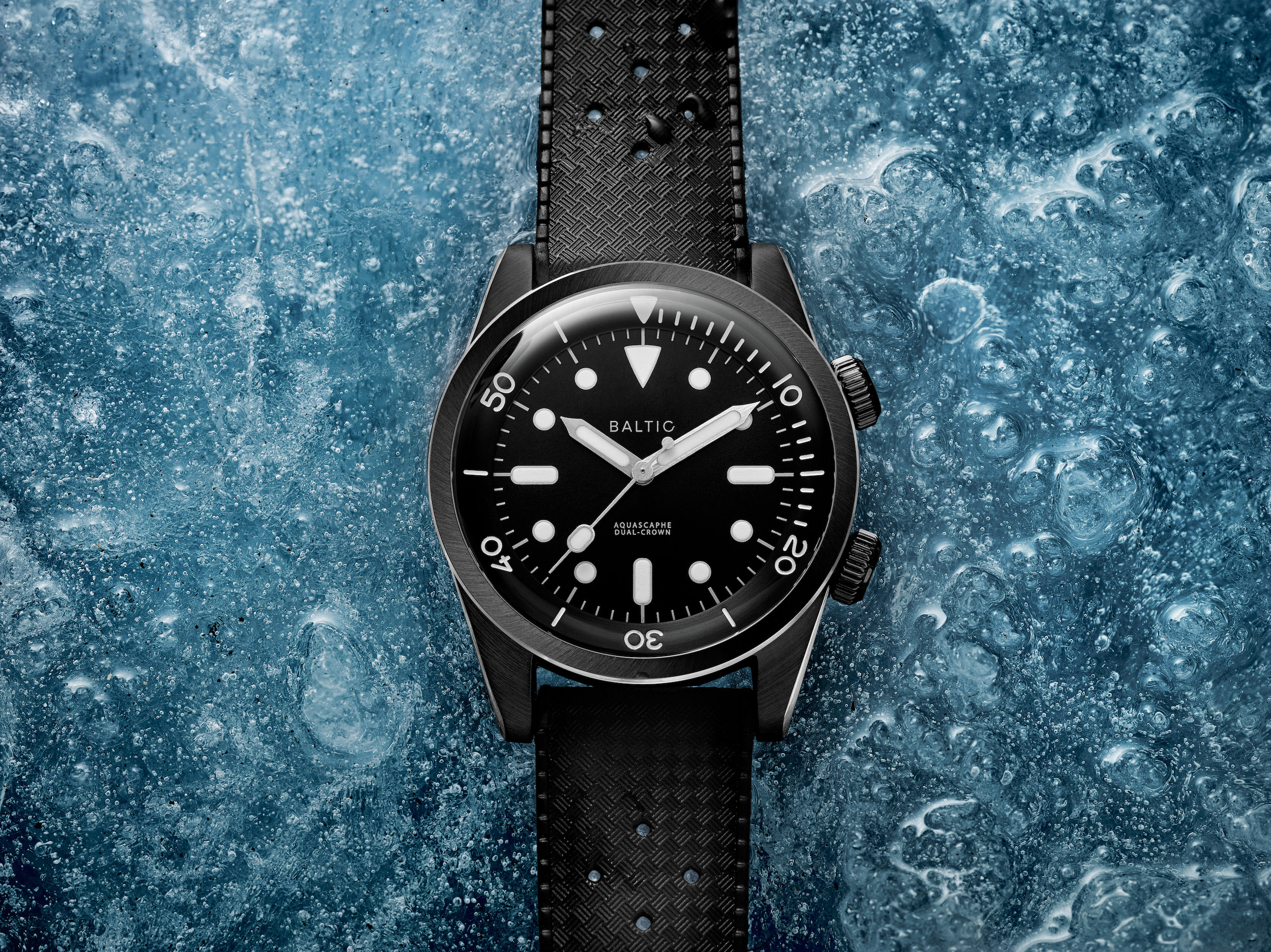 Following the successful Aquascaphe and Aquascaphe GMT, Baltic will now offer a Dual-Crown version of the Aquascaphe. Interestingly, they were able to keep the same 39 mm diameter case size as seen on the aforementioned models. The new Dual-Crown is listed as being 0.1 mm thinner than the previous Aquascaphes (11.9 mm vs. 12 mm), and while it’s good to be accurate about specifications — in real life, this reduction in thickness is negligible.

Aesthetically and functionally, the Dual-Crown loses the 12 o’clock Arabic numeral hour marked in a place of a large triangular-shaped index. In fact, all the hour markers have gotten slightly larger, which enhances legibility and allows for more lume to be applied. To match the upsized markers the luminous pencil-shaped hands have also been enlarged. And instead of a lollipop on the end of the center seconds hand, it’s more of an oval shape now.

Driving the hours, minutes, and seconds is a accessible Japanese Miyota 9039, which is part of the company’s premium movement collection, but is relatively low-priced when compared to a Swiss movement. The 4Hz automatic caliber has hand winding, hacking seconds, and a 42-hour power reserve.

The Baltic Aquascaphe Dual-Crown maintains a 200-meter water-resistant rating, thanks to gaskets all around, a screw-locked caseback. The locking crowns have a  grid pattern embossed on each. A domed sapphire protects the dial side of the watch.

There are two dials available for the regular stainless steel versions, blue or black sunray. There’s also a third option which is a black PVD treated steel case with a black sunray dial. For straps and bracelets, there are three options. A recycled marine plastic textile strap, a rubber tropical strap, and a beads-of-rice bracelet. The bracelet comes with a Baltic-developed buckle that developed a buckle with 7 micro-adjustment positions designed to fit most wrist sizes.

Uniquely, in addition to the common brushed and polished surfaces used on watches across the spectrum, the bezel has what Baltic refers to as a “brushed tourbillon” finish, which has a different pattern of brushing than those typically seen on watch cases: vertical, horizontal, or circular. The edges of the case even have a slight machine bevel and polish, which is nice to see in the under $1,000 price point.

Each watch is assembled and adjusted in Baltic’s workshop in France, near Besançon, by professional and experienced watchmakers. The retail price is $658, but it will go up after the pre-order period.