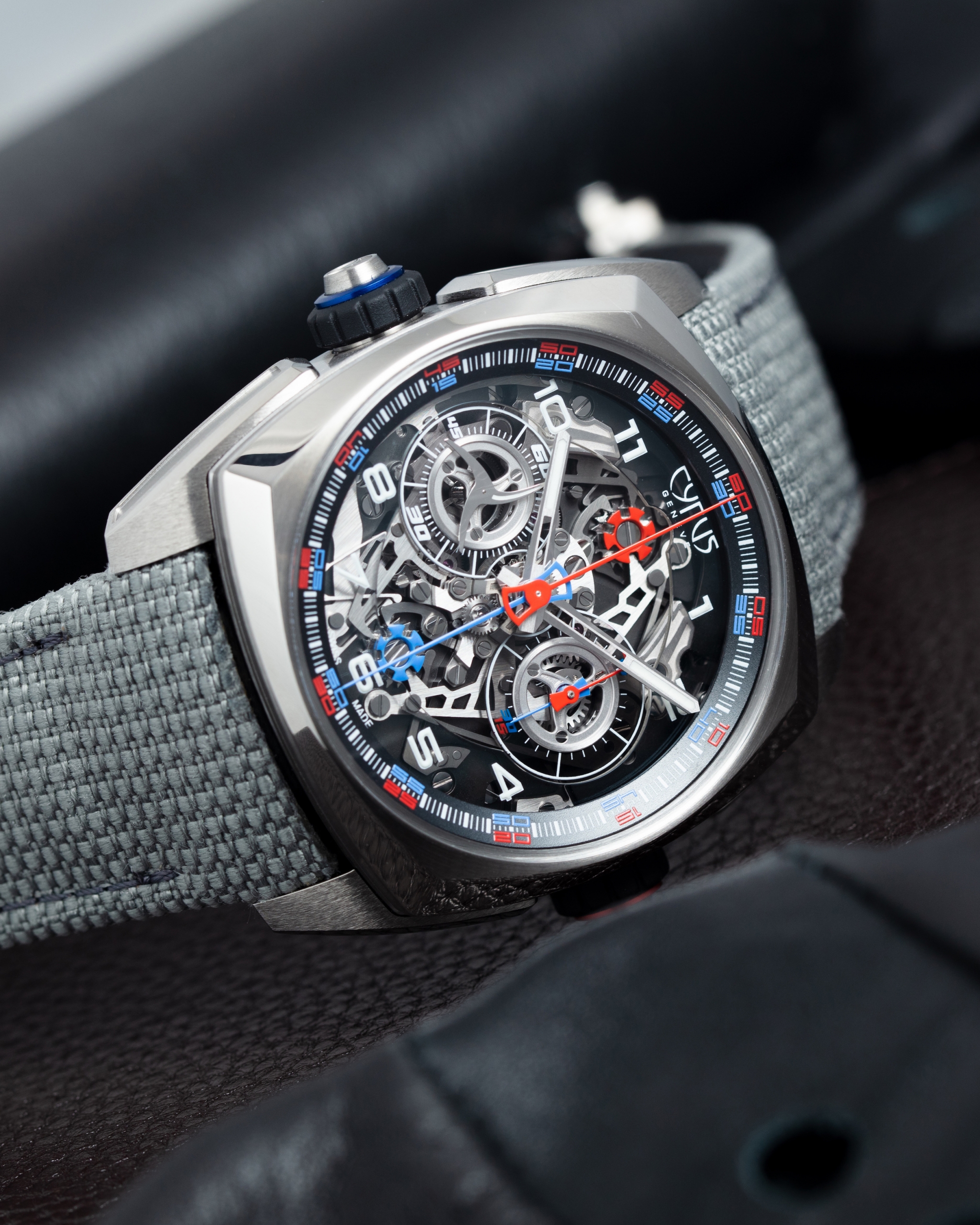 Created by well-known master watchmaker, Jean-François Mojon, of Chronode, the Klepcys Dice Chronograph is similar to a split-seconds chrono but with enhanced control and readability thanks to the dual crown system.

With the chronograph components exposed on the dial side, you can see that the movement has two column wheels, cleverly positioned opposite of the other — and painted with either bright red or blue lacquer — to clearly distinguish one from another. As is often used for chronographs, this color logic carries over to the central chronograph seconds hands, the graduated chronograph scales on the flange, to the chronograph minutes counter at 3 o’clock, and even to the individual crowns.

Operating the red independent chronograph starts with the mono-pusher button on the end of the crown with a red ring around it (on the right side of the case). From there the red center chronograph seconds hand at 12 o’clock, and the red chronograph minutes hand at the zero position (rests at 12), within the subdial at 3 o’clock, can be started/stopped/reset so as to tally one event.

Want to operate the second independent chronograph and all you have to do is switch over to the crown on the left case flank (marked with a blue ring), and depress the mono-pusher button for that chronograph to start/stop/reset the stopwatch function, simultaneously with the red chronograph, or completely separate. Notably, when you start the chronograph center seconds, instead of the blue hand starting at 12 o’clock, it’s positioning to start at 6 o’clock, meaning the hand is effectively mirroring the red chronograph center seconds hand. The same is true for the chronograph minutes counter. The graduated scales on both the red and blue chronograph seconds and minutes counters are mirrored to work with their respective hands.

The result is a set of chronographs that can be operated truly independent of one another, and perhaps best of all is that you can enjoy seeing all of the operations because the components are mounted dial side and the dial has been skeletonized. This means if you’re operating the red or the blue chronograph, you’ll see the respective red or blue column-wheel activate when starting, stopping, or resetting either one via its dedicated mono-pusher.

To deliver this unique functionality, caliber CYR718 requires a whopping 51 jewels and 443 total components. The 4Hz automatic movement measures 36 mm x 11.65 mm and has a 60-hour power reserve when fully wound. While the finishing looks completely acceptable, it’s worth pointing out that none of the movement components are decorated to Haute horology standards, which is presumably how this high level of horological functionality is offered within a price range south of forty thousand.

Each Klepcys Dice Chronograph is engraved with “Limited Edition ONE of 50” on the perimeter of the sapphire caseback and comes with a gray Cordura fabric strap and an extra black rubber strap. Cyrus’ Dice chronograph is available in titanium for $36,700 or black titanium for $37,700.