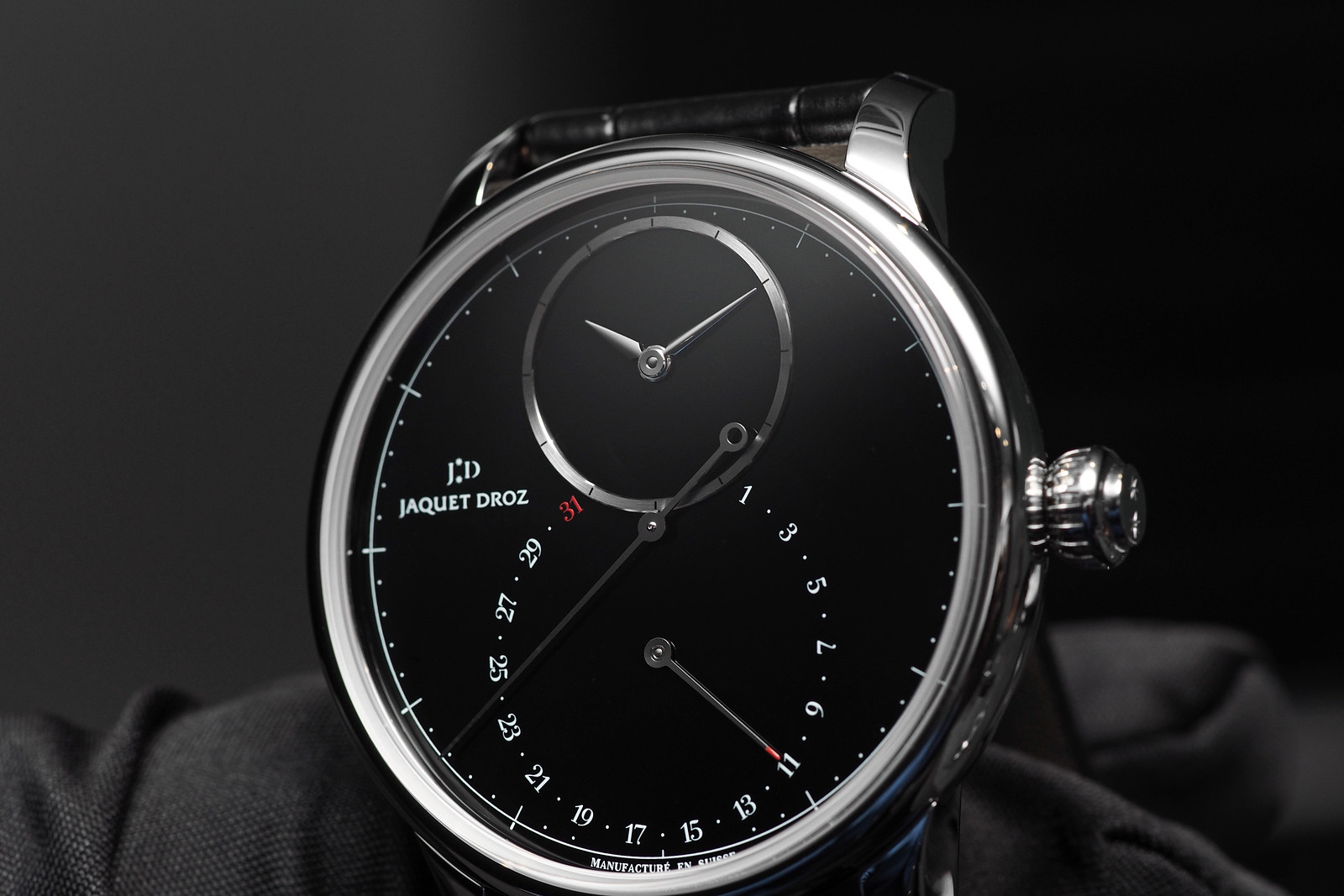 Last month at Baselworld, Jaquet Droz debuted a timepiece, with a deadbeat seconds function, and a unique dial made from black onyx called the Grande Seconde Deadbeat Onyx.

Onyx is a mineral crystal (gemstone), formed of bands of chalcedony in alternating colors, according to Wikipedia. “It is cryptocrystalline, consisting of fine intergrowths of the silica minerals quartz and moganite. Its bands are parallel to one another, as opposed to the more chaotic banding that often occurs in agates.”

For each Grande Second Deadbeat Onyx dial, a piece of onyx is cut and then polished to a glossy finish, resulting in a look that is quite striking, especially when contrasted by the 18K white gold monoblock applied chapter ring. The hours and minutes are indicated by polished white gold Lance-shaped hands in the upper dial. And a long centrally-mounted baton-shaped hand, with an open-tipped counterweight, indicates “deadbeat” small seconds (instead of smoothly sweeping hand like the majority of mechanical watches, the second hand ticks like a quartz movement). There is also a retrograde date display by hand at 6 o’clock.

The case is 43 mm x 13.79 mm, crafted from stainless steel, and like the rest of the watch, has a reflective, fully polished surface. But even with so much sheen, the minimalist dial, and constrained design, result in a watch that is flashy without being gaudy.

Animating the timepiece, and visible through a clear caseback, is an automatic caliber 2695SMR, which has a silicon balance spring and pallet horns, deadbeat seconds, and is decorated with Côtes de Genève rayonnante (sunray Geneva stripes), perlage, and a matte frosted skeletonized rotor with an embossed Jaquet Droz logo. The power reserve is 38-hours.

The Jaquet Droz Grande Seconde Deadbeat Onyx has an onion-shaped steel crown at 4 o’clock, with ridges, and is embellished with a twin star Jaquet Droz motif. There is also a version with a silvered opaline dial but onyx is clearly the way to go, in my opinion. (Ref. J006030270)