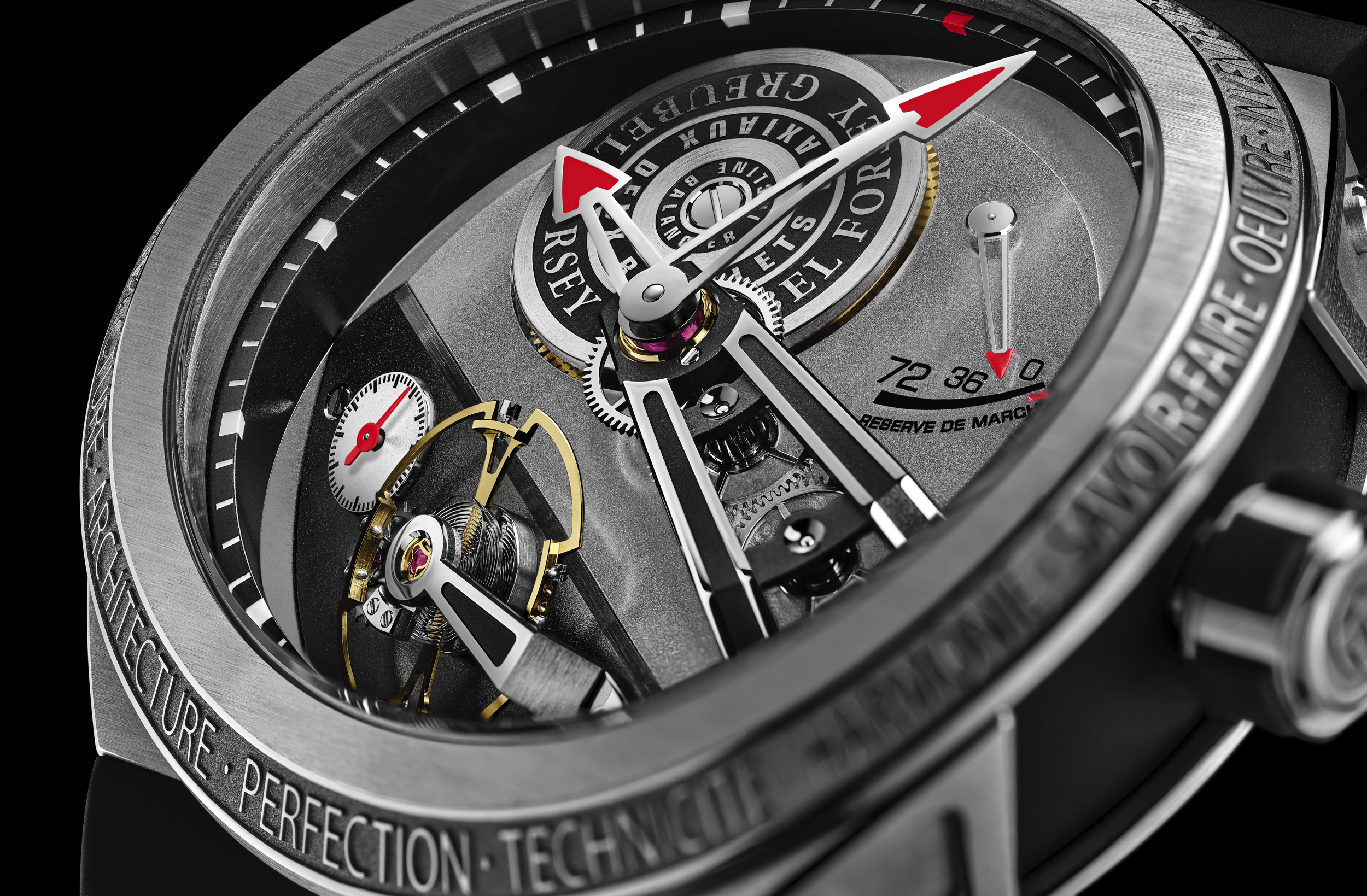 Adding to the technical complexity of the watch — a continuation of the design language seen on the Greubel Forsey GMT Sport — the case is unlike any “standard” round or oval case. That’s because Greubel Forsey doesn’t do anything standard.

Referred to as “ovoid,” the Balancier S appears to have a round case when viewed straight on, however, at an angle, or close-up you can see the case is not quite perfectly rounded, and more obviously that the height of the case slopes at the top and bottom — which both results in a highly ergonomic profile and creates a distinctive appearance.

The Balancier S case is crafted from lightweight titanium and measures 43 mm in diameter by 15.6 mm thick. The lugs are integrated into the case, tucked so tightly into the case, in fact, that the 45 mm length from the top to the bottom of the bezel, is slightly longer than the actual lug-to-lug length.

Sloped in sync with the lines of the case, the dial and the movement which are effectively one and the same, have been built just for this unusual case. Further, the large 12.6 mm in-house designed and manufactured balance wheel — that’s free sprung and has 6 inertia adjustment screws — is mounted at a 30° angle.

Driving the four hands of the watch is the newly developed in-house Balancier S movement. The two central hands are made of stainless steel, have been skeletonized, and use large red-lacquered arrow tips to indicate the hours and minutes. To the right of that is a smaller, similarly skeletonized red arrow-tipped hand that indicates how much of the 72-hour maximum power reserve is left in the mainspring barrels at any given time. And finally, at 8 o’clock, is a small seconds dial, made of gold, and with red varnished baton-shaped hand indicating the running seconds — which has been cleverly aligned at the same 30° angle of the marque balance wheel that sits to its right.

Finishing of the dial, movement, and case utilizes some of the most advanced techniques in all of watchmaking (which is part of the reason GF timepieces are also amongst the most expensive timepiece in the world).

For starters, the variable geometry, three-dimensional, has relief-engraved text consists of raised lettering that’s been polished, contrasted by a dark gray frosted background, and surrounded by a mixture of straight-grained brushing and polished chamfers.

The details are impeccable, and this is surely one of the most complex watch bezel finishes we’ve ever seen.

Around the mainspring power barrel cover, the finishes are similar to the relief-engraved text, and polished chamfers, but what’s subtly different is the black frosted treatment (compared to the dark gray frosted finishing on the bezel), and circular graining as opposed to straight-grained brushing.

Move to the dual arched bridges which are supporting the cannon pinion, center hands, and the entire gear train, and these too have been finished to perfection with polished bevels and countersinks and the same frosted black treatment seen on the barrel cover.

Similarly, the balance bridge is multi-level, crafted from titanium decorated with a black treatment in relief and polished beveling and countersinks.

The entire mainplate/dial, which is broken into two parts, the upper section, and the lower section, are completely frosted in gray or black, respectively. On the back, the bridges — which are frosted gray — have been elaborated with polished chamfered edges, polished countersinks, polished screw heads, and a polished “GF” logoed plate that’s affixed to one of the bridges.

Even the case flanks are treated to the same finishes as the rest of the timepiece, such as black and gray frosted surfaces, polished chamfers, and straight-graining.

Fittingly, there’s not much gold on this watch at all, as it’s designed as a sports watch. Still, the small seconds dial is made of solid 18K gold, with rhodium-colored plating and polished beveled edges.

Completing one of Greubel Forsey’s sportiest watches to date is an integrated black natural rubber strap that’s screwed to the caseback, vertically, and a titanium crown relief engraved with the GF emblem and surrounded by interchangeable black vulcanized rubberized capping.

Despite the paradoxical nature of manufacturing of timepiece with this level of complexity and cost — the “S” in Balancier S stands for “Sport” and accordingly this watch has been precision engineered to maintain chronometric accuracy while also preventing gravitational forces, shocks, or water from getting in the way of an active lifestyle.