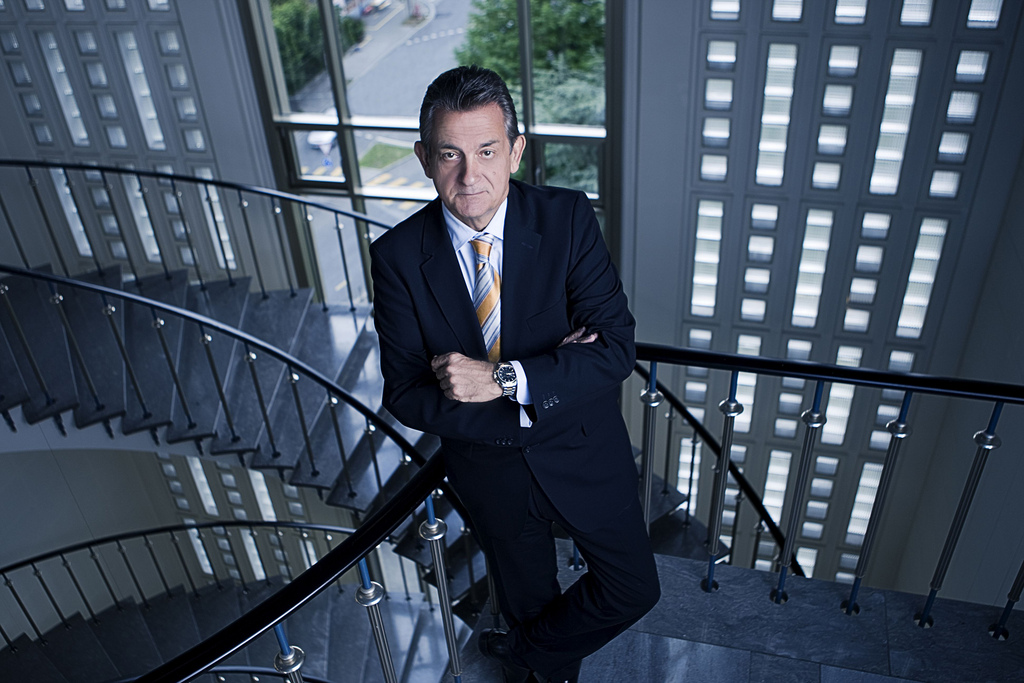 Omega has had a pretty busy year with the launch of the revolutionary Aqua-Terra Anti-Magneti watch, the Speedmaster Bullhead, and 1957 throwbacks, and of course, the Speedmaster Dark Side of the Moon. And now, the Seamaster Diver ETNZ Limited Edition. I have to say, I am quite impressed.

No way. We have a lot in the pipeline. We say that every year. How can 2013 match 2012? Last year we had the Olympics, James Bond, and the Ryder Cup. We have the Olympics next year again, in Sochi. We have some new models, some new ideas coming out next year. We also have some in advance of the Olympics.

The anti-magnetic technology you just mentioned has been a very big breakthrough. When I go back next week I will be in Europe, and the week after in Moscow, doing press events for that. I think it is a problem we can not underestimate. Most people don’t realize the effect a magnet can have on a mechanical watch. It is so present in everything we have. An iPad with a normal iPad cover has 14 different magnets.

Apple says, if you have a pacemaker you don’t put that near your heart, now way, you have to keep it away. A watch and a heart are not the same things, but still, it has an incredible effect. Woman’s handbags, every fridge you open. And now we found a way to solve the problem, not by hiding it away and putting it in a cage and locking it up. But by changing the materials. Every watch between now and 2017 we come out with will have that same technology — an anti-magnetic movement.

According to a number of industry sources, Omega has been taking market share from Rolex in recent years. Is this true? And if so, what do you attribute this to?

I believe also what I read, so I read the same things you did. Yeah, you know it is a big statement: taking market share. If you look at the figures for the last 30 years, obviously Rolex has been the dominant force in the watch business. If you look at the chronometer certificates it is common knowledge, we know how many watches they make every year.

I think there are a lot of factors.

I think number one in all honestly is that the watch market has changed. It has become a more sophisticated market, a much more diversified market. I think before ten or twenty years ago people wanted to buy a good watch, there wasn’t much choice, let’s face it there was one watch that stood out. Today, there are a lot of watches, a lot of brands. Even above Omega, a lot of brands out there, a lot of innovation, and a lot of quality. The retail environment has changed.

Number two, Omega was always the alternative to Rolex. Rolex was the alternative to Omega in the 50s and 60s. So in a way it is normal. Some of our watches are so similar, you take an original Seamaster and put it next to a Rolex of the same era, it is the same watch, the same DNA.

I am not giving any secrets away. I think two things we did really make a difference, that is in my opinion.

One is we made a decision to have a very profiled retail. With our first shop, we opened in Zurich, this has changed, people forgot ten years ago how many brands had a mono-brand boutique? Very few. And now, just in the US, we have 33 stores. This gives Omega a fantastic presence that we really didn’t have before.

And secondly, much more important than that, was the Co-Axial movement. I remember when I joined Omega in the late 90s it was there and everybody said it was something that is nice to have — the Co-Axial movement — but I think nobody realized the potential. What we did was not just take the Co-Axial and put it in an existing movement but we made a new movement around the Co-Axial. For me, this has given Omega an edge over the brand you mentioned before. They didn’t need it because people didn’t buy Rolex for that.

Today, it has put the rivalry on a different level.

We have something there, we have got a little head start with the Co-Axial. And I think things change. I always say when you are fighting a war and sitting up there alone and looking down at all the guys to trying to fight you. One approach can work. But when you gotta come down and come into the arena, and roll up your sleeves and fight. It’s a little bit different. Do you know what I mean? So, I think that is what is happening today. It is very healthy. It is normal. It is a fair battle, and we are making certain headway. China also played a big role. It is very important to the market today.

Yeah, ok, I think we are taking market share.

Anything else you would like to add regarding the new Omega ETNZ or Omega in general?

The Limited Edition timepiece is not going to make a big difference for neither Team New Zealand nor us, but I think it is nice what Omega has always done over the years; each event like this we have a watch that can help the message go through. Personally, I think this is the nicest of all the America’s Cup watches that we’ve made.

Omega in general, I think you mentioned before we are trying to get this brand where it should be. I think Co-Axial is really going to play a big role. I think that in 20 or 30 years people will look back and say that the Co-Axial helped Omega come back to where they are or should be today. I think future generations will continue to appreciate watches. China has already emerged. India is a sleeping giant. Brazil is important. Russia is still obviously a big country. Indonesia, we are opening an office there. Even the African continent, one day, to be there! And the rest of the world.

I still think it’s incredible that a watch is a product that can be embraced by any person, anywhere in the world, both genders — young and old. You don’t need to have an incredible culture to appreciate it. I think that is what Omega’s vocation is. It can never be a niche brand.