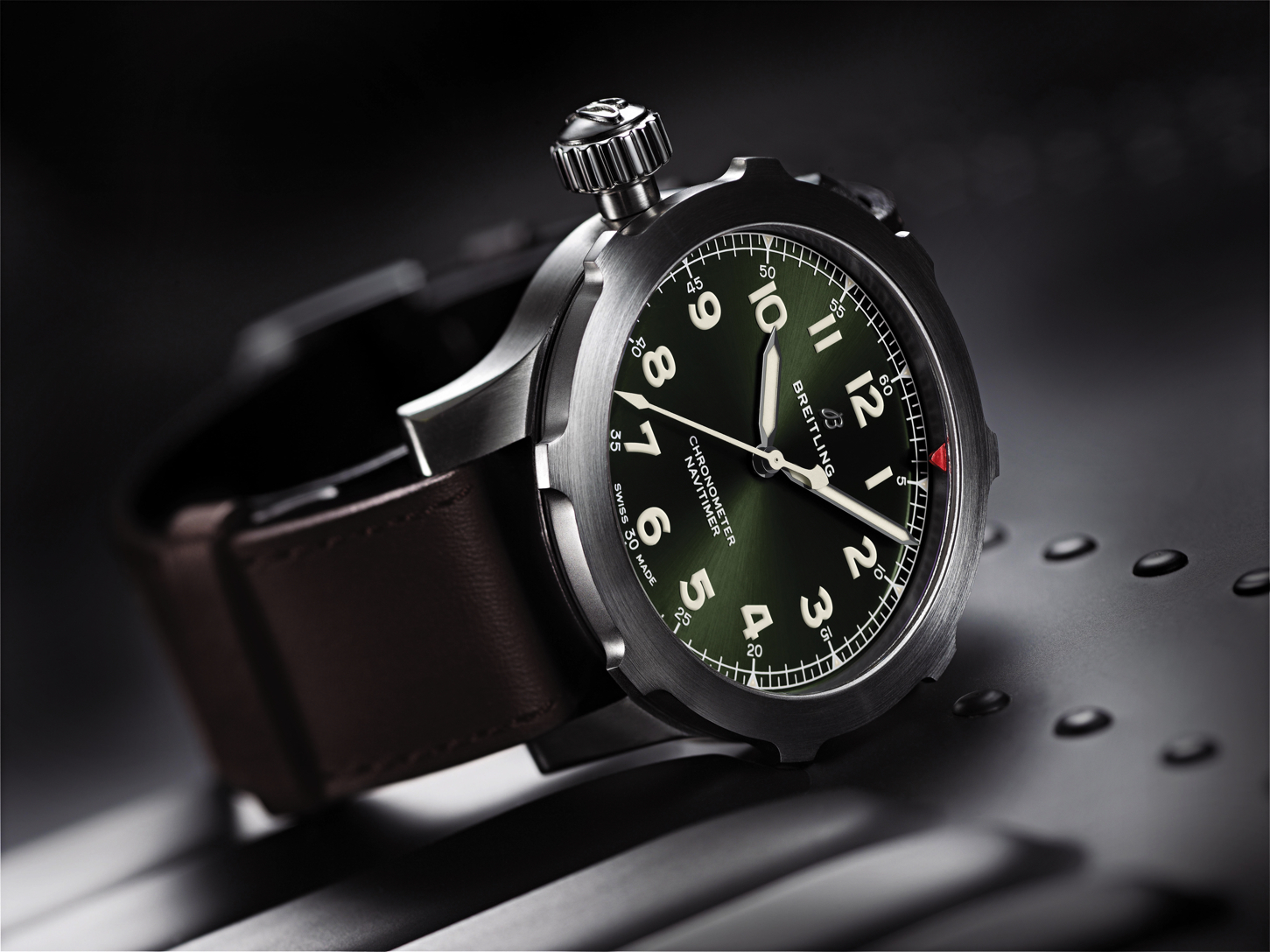 In the 1930s and 1940s Breitling produced the Reference 637 stopwatch, which bomber pilots and crews wore strapped to their thighs during the Second World War. Distinguished by a crown at 12 o’clock and pusher on the upper left side of the case, the 637 was made to be operated with gloves on. The pusher was used to activate count-up and count-down functions that were critical to mission timing. This was a professional watch, in the purest sense.

Today, on the eve of Baselworld 2018, Breitling debuts the Navitimer Super 8, inspired by the historic Reference 637.

According to Breitling, “The Reference 637 was created by Breitling’s Huit Aviation Department, which was established in 1938 by Willy Breitling. He was aware of the strict requirements for military and civil aviation, and the Department’s name – the French word for “eight” – was chosen to reflect the eight days of power reserve offered by onboard clocks and other dashboard instruments. The clocks developed by Huit Aviation were also admired for their lightweight cases and their ease of installation.

Willy Breitling understood that aviators worked in demanding, unforgiving environments that required instruments that were not only highly legible but also capable of outstanding performance in the harshest of conditions. The Huit Aviation Department created a battery of challenging tests that proved that its instruments – including the Reference 637 – were more than a match for the shocks, vibrations, extreme temperatures, and magnetism that pilots and crews were likely to encounter in the cockpit.”

The Breitling Navitimer Super 8 pays homage to the Reference 637, although at 46 mm x 14.4 mm in diameter, it’s actually wearable on the wrist. When you factor in the protruding notches of the bidirectional rotating bezel, the diameter is actually 50 mm, which is, of course, large, but you have to remember this is a limited edition collectible watch designed to pay homage to an even larger stopwatch. A prominent screw-locked crown, positioned on the left side of the case, improves ergonomics despite its impressive dimensions (at least to those wearing it on the left wrist).

The stainless steel model has a black dial and titanium version features a military green dial.

Both versions have large, printed luminescent Arabic numerals, as well as additional lume on the indices around the outer chapter ring. A convex sapphire crystal protects the dial. The hour and minute hands are also luminescent, which is crucial for an instrument such as this. A triangular pointer is adjusted by rotating the bezel, making it easy to track elapsed times. The watch also features an arrow-tipped central second hand.

Driving the Breitling Navitimer Super 8’s hour, minute, and second functions are the COSC-certified manufacture caliber B20, based on the Caliber MT 5612, which is automatic movement with exclusive finishing that is wound by a dual-action ball-bearing rotor. It features power reserve of over 70 hours. Water-resistance is 30 meters. Each version is presented on a brown leather Nato strap with pin buckle.

Retail prices are not yet determined. (Ref. EB2040)