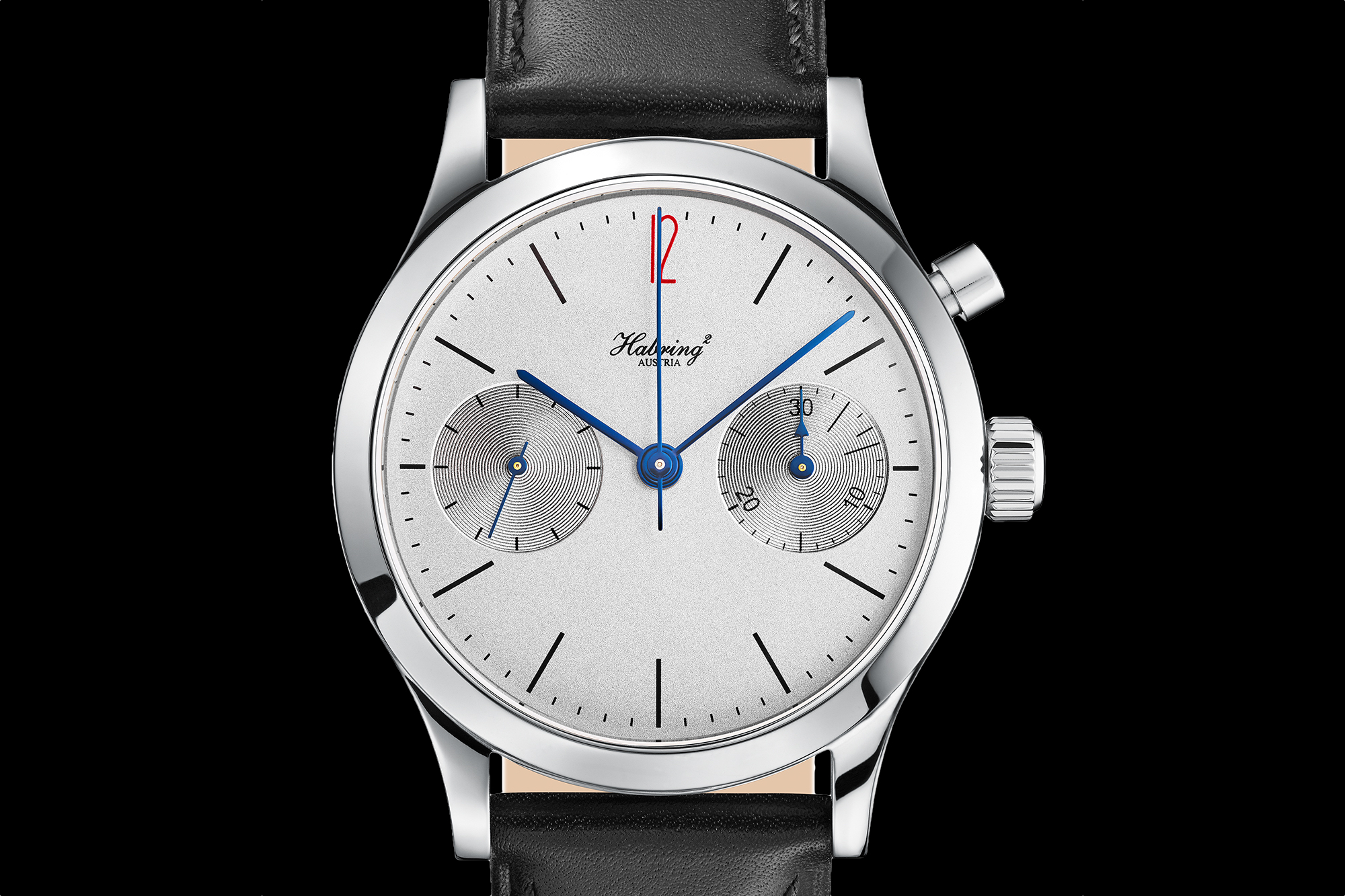 As many of you likely already know, a mono-pusher chronograph allows the wearer to operate start, stop, and reset functions all from one-button, and typically costs quite a bit more than a standard two-button chronograph.

The Chrono-Felix is, however, a relatively affordable single button chronograph presented in a 38.5 mm x 10.5 mm stainless steel case with a domed sapphire and silver-white granular metal dial with black printed indices, a red printed Arabic numeral at 12, and polished, black oxidized steel hands (or blued steel hands by request).

Two subdials display the running seconds and chronograph minutes, respectively, and feature a snailed decoration which contrasts the granular texture of the dial, despite both surfaces being the same silver tone.

Just under 12 o’clock is the logo “Habring² Austria” printed in black. And with no date display or additional functions, such as an hour counter, the dial is about as clutter-free and easy to read as it gets for a chronograph.

The double-sealed push-in crown, screw-in sapphire caseback, and standard gaskets work together to provide a water-resistance rating of 30 meters.

One of the best reasons to buy a Habring² is the in-house caliber A11C-H1 movement, which is based on the company’s caliber A11.

The baseplate has a frosted finish and the bridges and components have either straight-grained, circular-grained, and perlage finishing. Straight-graining, beveling, and polishing has all been done by hand.

In speaking with master watchmaker Richard Habring (a former top watchmaker at IWC and co-founder of Habring², along with his wife Maria) this morning, he made it clear that the A11 based caliber is in-house made, and the mono-pusher chronograph module has a few parts from the caliber 7750 but even those parts are being transitioned over to being done at their manufacture. He said they specifically “Do it already with the cam, the start-stop lever, the ‘brake’, the reset lever and others.”

The movement measures 30 mm / 6.5 mm and they paid special attention to the thickness, keeping it thinner than their split-seconds chronograph.

Beating at 4Hz  or 28,800 vph, the 180 component, 25 jewel, hand-wound movement has a power reserve of 48-hours when fully wound. Regulation is handled with an Amagnetic escapement and a Carl Haas hairspring that is chronometer quality. It can be adjusted for accuracy with a fine adjustment tangential screw.

You can see this watch in Tokyo August 15th-27th at the Nihonbashi Mitsukoshi Main Store 7th floor (during the World Watch Fair). The watches will begin arriving at retailers in September.

These watches are done in small batches, with a certain level of care you might not find in from larger companies, and I highly recommend them. Each piece has a consecutive serial number engraved between the lugs at 6 o’clock. Retail is approximately $7,250.