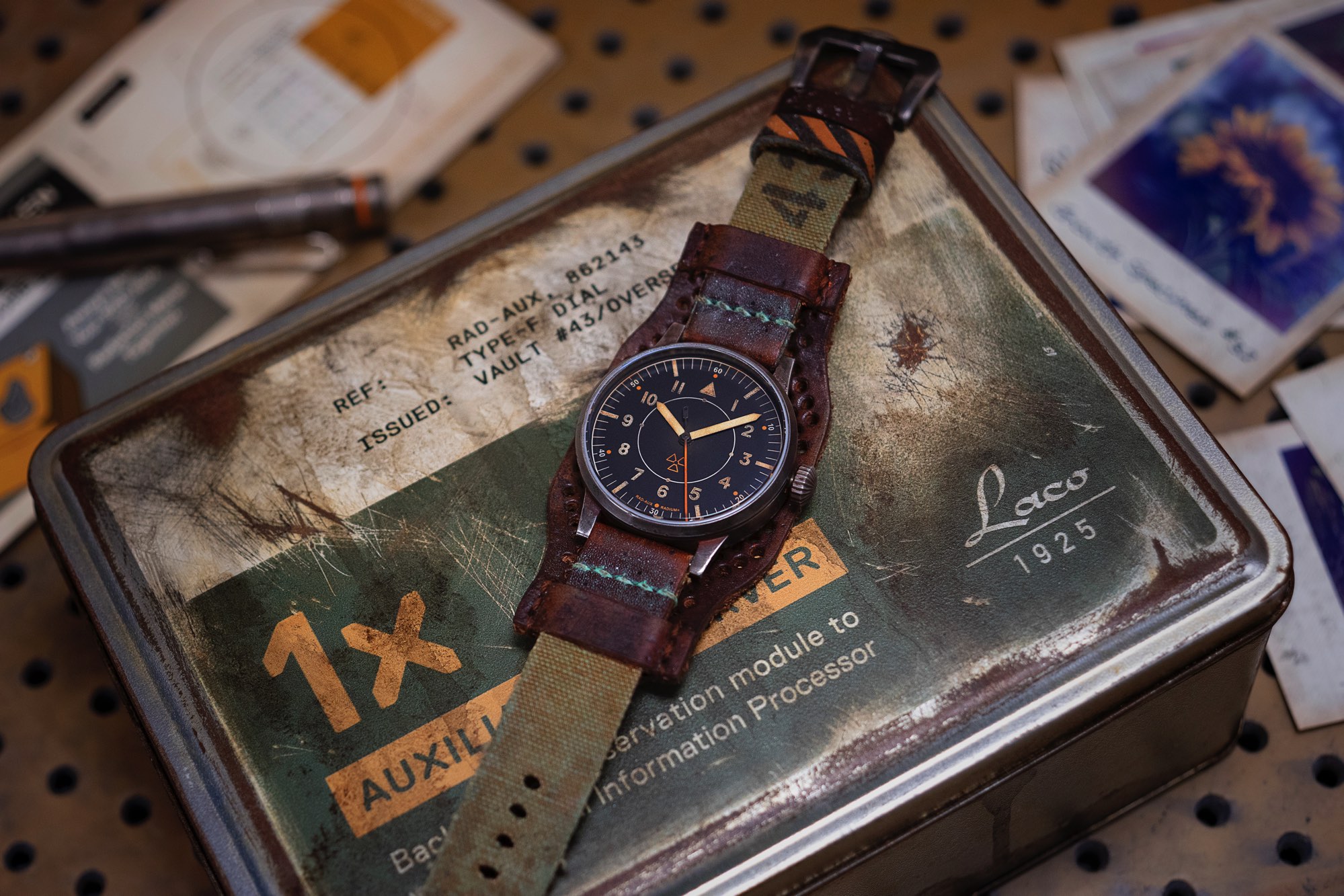 There is no official relationship with Bethesda Game Studios, which owns the rights to Fallout, but the watch release was well-timed considering the latest game in the series, Fallout 76, was released just last month.

According to the Wikipedia Fallout (series) page, “The series is set during the 22nd and 23rd centuries, and its atompunk retrofuturistic setting and artwork are influenced by the post-war culture of 1950s America, with its combination of hope for the promises of technology and the lurking fear of nuclear annihilation.”

This aforementioned “retrofuturistic” artwork – influenced by the post-war culture of the 1950s America – is also what has inspired the design theme of the complete Laco Auxiliary Observer RAD-AUX watch kit which includes a specially made Savage brand bag, metallic box, and other complementary artifacts.

The watch comes in a weathered stainless steel case the measures 42 mm x 13 mm (20 mm interlug width) and is fitted to a bund-style strap made from reddish-brown leather and olive canvas. Little details such as the lime green thread that looks like the green oxidation you get overtime on bronze, and a black/orange angled nuclear hazard warning stripe pattern on watch on the stays, amplify the nuclear fallout aesthetic.

“The Laco Auxiliary Observer, or ‘RAD-AUX’, was created specially for the U.S. market. Taking inspiration from the Fallout gaming series, the RAD-AUX is a partial redundancy for the ‘Pip-Boy’ wrist computer. With this watch, you can time your radiation exposure when exploring the wastelands beyond your vault. Originally issued to Vault #43, this watch has seen years of hard use and certainly has a story to tell,” according to Ablogtowatch.

On the dial, the post-apocalyptic design cues are apparent, including faded lume for the markers hands, an orange/black color scheme, and the international radiation warning symbol at 6 o’clock. The solid caseback even has a radiation time table engraved on it which, should your so-called “Pip-boy” fail, allows your RAD-AUX to be used in conjunction with a separate rad meter to calculate and time your exposure to radiation.

Each watch is manufactured and assembled in Pforzheim Germany, and uses a 4Hz Swiss ETA 2828.2 which drives the hours, minutes, and center seconds. The 25 jewels automatic mechanical movement features hacking seconds and a 38-hour power reserve. The additional accouterments such as the bag, box, and artifacts are all made in North America.