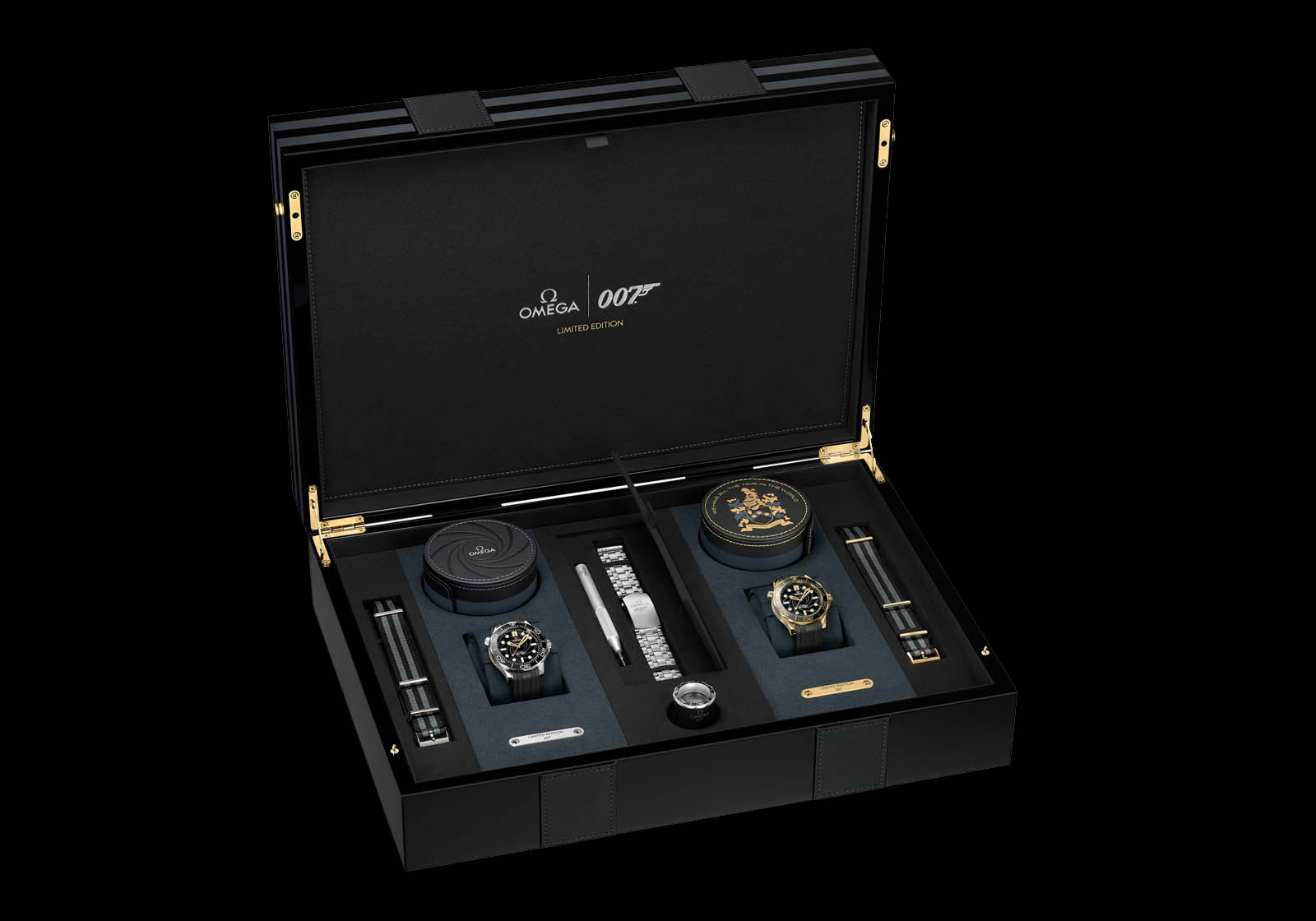 In anticipation of the upcoming James Bond movie, No Time To Die, which is slated to be released April 2020, Omega announced a 7,007 piece numbered limited edition 007 Seamaster in September of this year. Then, last month, Omega followed up with a two-piece limited edition set of 257 units that include two Seamaster Diver 300M Limited Editions presented in a so-called “Secret” suitcase, which has been bound by black and grey Nato-inspired straps.

With the set you receive an identical model to the Seamaster 300M James Bond edition that was released in September with a stainless steel case and black rubber strap, and extra steel bracelet, and an 18K yellow gold plate on the case flank engraved with the edition number. The only difference is this one comes in the new two-piece box set, and has a number between 1-257 on the side.

Additionally, there’s an 18K yellow gold Seamaster 300M “James Bond” edition included, also with a black rubber strap with an 18K yellow gold buckle. On this watch, the case plate with each Limited Edition number is in 18K white gold, and the black ceramic bezel features a diving scale in Ceragold.

Both watches feature a spiral-brushed black ceramic dial with a special black PVD coating and a laser-engraved gun-barrel design. There’s also a hidden number 50 within the Super-LumiNova of the 10 o’clock index, which is a reference to the 50th anniversary of On Her Majesty’s Secret Service (1969).

The watches include 18K yellow gold hands and indexes, with a marker at 12 o’clock, inspired by the Bond family coat-of-arms. This crest is also metalized in gold and black on the sapphire crystal of each watch’s caseback. Owners will receive an additional stainless steel bracelet, as well as a Nato strap for each model, with buckles in matching materials.

It’s worth noting that 2020 will be the 25th year that Omega has been on the wrist of James Bond. (Omega has paid for its watches to be placed in every James Bond movie since GoldenEye in 1995.)

Similar to the single-piece limited edition which retails for $6,500 Omega has made the watch available in stores and prevented online purchasing (the Omega website says “unavailable” but these are available through traditional methods such as calling, emailing, or visiting the dealer in person). The two-piece set costs an eye-watering $42,100 and is still available at Omega boutiques worldwide.