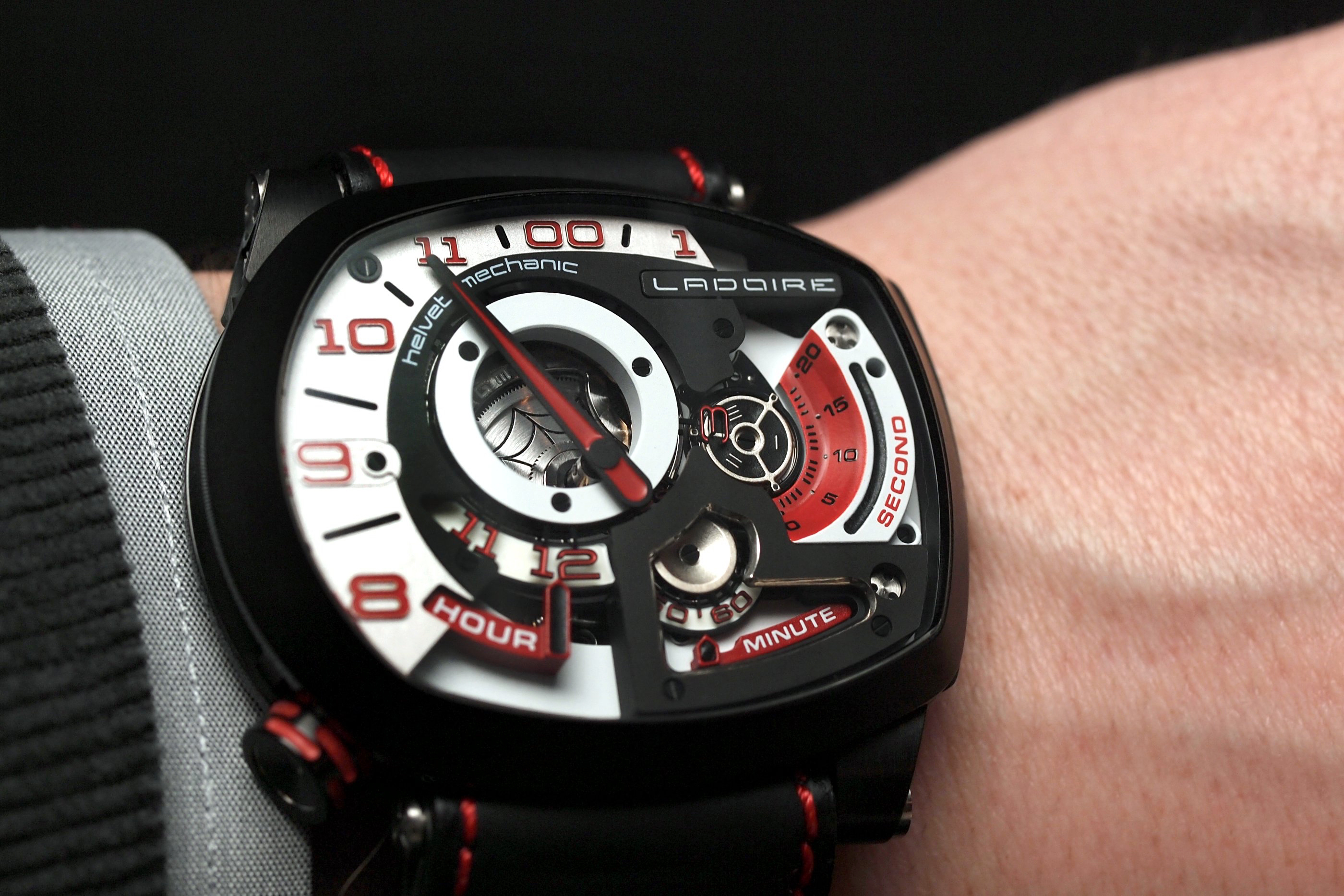 At Baselworld 2011 I had an opportunity to interview the co-founder of Ladoire Geneve, 39-year old Lionel Ladoire (pictured below). Prior to becoming a watchmaker, Lionel was a talented jeweler, a rock drummer, and a professional snowboarder. Lionel was born into a family that has been in the jewelry business for four generations. Eventually, he attended the SEPR in Lyon, where he finished at the top of his class when he graduated in 1989.

From there, he went on to make jewelry for the Place Vendome. He then opened his own workshop in Lyon where he worked in close collaboration with a number of French Fine Jewelry companies. Having been around micro-mechanics from such a young age, and after 20 years of working in the jewelry industry, he eventually gravitated towards watchmaking.

In 2007, Lionel Ladoire and his friend Richard Piras founded Ladoire Geneve. Lionel creates the timepieces and Richard manages the business. Driven by Lionel Ladoire, the design of Ladoire timepieces is built around the rock/underground mood, and is inspired by contemporary culture. The components in Ladoire’s mechanical timepieces are entirely produced and crafted in the best Swiss workshops. Ladoire’s movements are fully designed, developed, and manufactured, tested at Ladoire’s Swiss Manufacture.

Ladoire’s regulator complication is unique in the world of horology. Entirely set on micro ball bearings, it has no hands, besides the off-center hand for the GMT. Ladoire owns an international patent for this unique technology using ceramic micro ball bearings.

The Black Widow collection represents the second generation of Ladoire regulator timepieces and features a number of changes that were implemented based on customer feedback. Clients said that the timepieces should be smaller and lighter.

To address these concerns Lionel decided to use titanium in the bezel, middle case and case-back of the Black Widow case. This allowed him to reduce the overall dimensions and weight of the case. The resulting case is lighter and more comfortable than the original (the Ladoire Roller Guardian Time). The case is much more sleek, without losing the cool asymmetrical look that has become a signature of the brand.

The only hand on the watch is the big red central hand, which displays a 12-hour GMT (second time zone) function. A large pushpiece on the right side of the case allows you to quickly set the GMT time. The actuation of this pushpiece is maybe the smoothest pushpiece I’ve felt on a watch (reminiscent of the smooth pusher on a column-wheel movement from one of the top watch houses).

The titanium case is finished in A-DLC (an advanced type of PVD coating) and measures 50.84mm x 41.77mm. The case sits very comfortably on the wrist. The sapphire crystal is cambered and glare-proofed. The caseback crystal is flat and glare-proofed. Water-resistance is 50 meters. The strap is made of smooth black full-grain leather and is double hand-stitched. A black pin buckle (A-DLC), secures the strap to your wrist.

It was a pleasure to interview Lionel and to learn about his intriguing young brand. These pieces are unlike the majority of the watches on the market, in that they do not follow the normal horological design rules. For example, the seconds disc spins counter-clockwise, which is totally contrary to traditional watchmaking.

This was one of my favorite meetings during my 4 days at Baselworld 2011, I highly recommend checking out the Ladoire Black Widow collection. Limited to 12 pieces per variation.