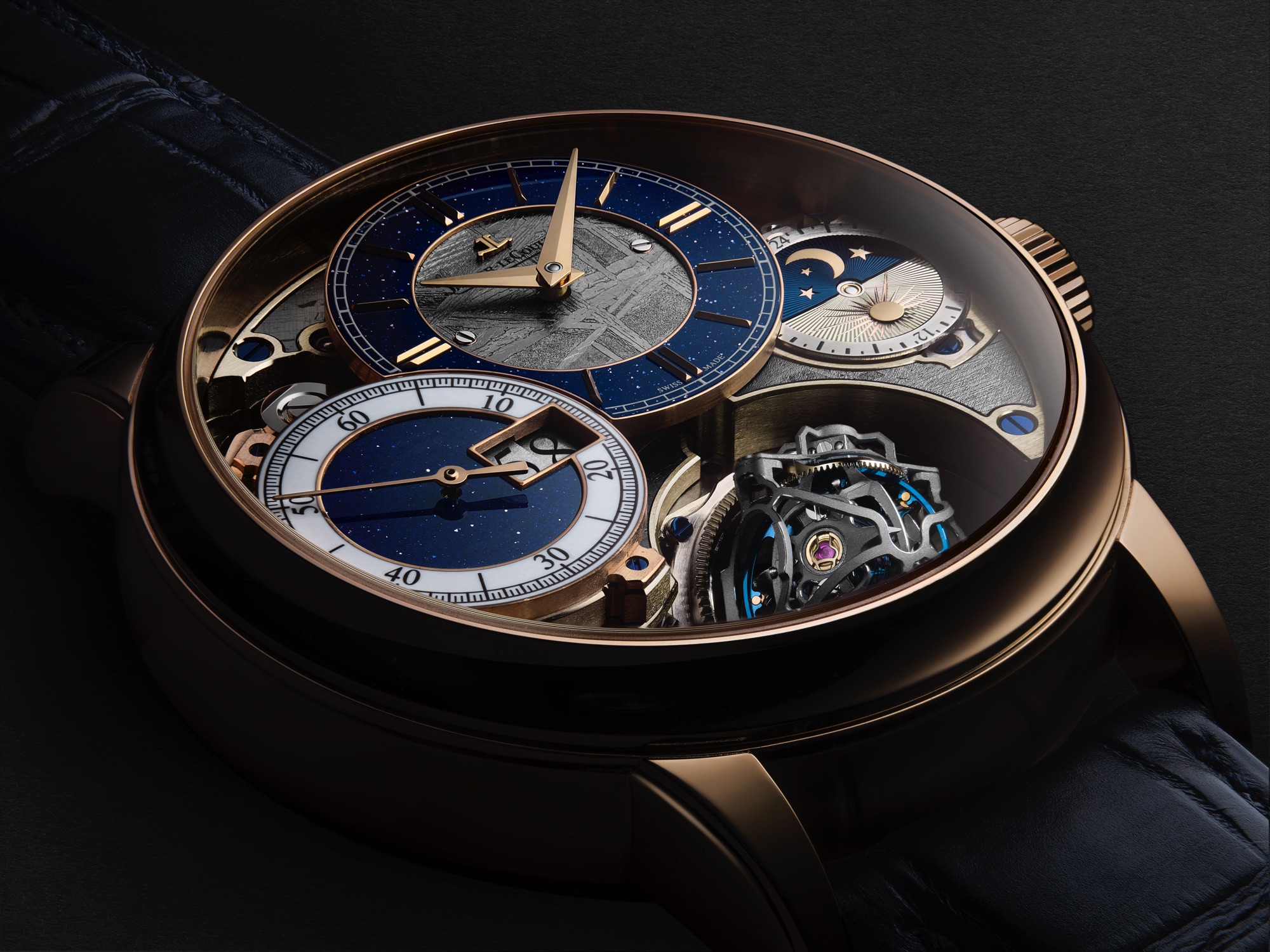 The new uber-complicated timepiece features the same movement and layout of the Gyrotourbillon 3 that was launched in 2013, and that we went hands-on with earlier this year, but with all-new artisanal finishes. Instead of hand hammering and frosting, this new 8-piece limited edition features hand-guilloche work, engraving, aventurine, and meteorite. Both the new and old versions feature grand feu enameling.

In the center of the primary off-center dial – which indicates the hours and minutes via pink gold dauphine-shaped hands – is a silvery-gray meteorite, juxtaposed by the glittery dark blue aventurine glass chapter ring, further contrasted by pink gold applied Roman numeral hours markers.

The small seconds dial, which overlaps the main dial (and obstructing its 8 o’clock marker) also features dark blue aventurine, but in the center. This display features a white grand feu enamel ring with a printed small seconds scale and a gold baton-shaped continuously running hand. Within this dial is the instantaneously jumping digital counter of the chronograph. Not an ordinary chronograph – a digital instant monopusher, column-wheel actuated, chronograph.

Opposite the small seconds/chronograph display is an intricate auxillary 24-hour day/night indicator with hand guilloche work in two colors and gold plated sun and moon motifs, to symbolize day and night.

Completing the dial side of the watch are German silver bridges, inlaid with gray slices of meteorite. And, of course, the signature multi-axis tourbillon a 6 o’clock which consists of two cages, set at two different angles, turning in opposite directions, at different speeds, with a blued spherical balance spring beating in the center, which creates a mesmerizing visual effect.

On the back the traditional Haute horology decorations are apparent: blue screws, ruby jewels, and hand-chamfered, hand-polished jewel countersinks, bridges, and the plates. What really sets this movement apart are the matte-finished straight-grained German silver bridges and plates combined with significant amounts of inlaid gray meteorite slices, which create a stunning aesthetic.

According to the Le Sentier based watchmaker, the material for the main dial was, “Found in Namibia, the Gibeon meteorite chosen for this watch is an iron-nickel alloy with an octahedrite crystal structure, formed by the cooling of the asteroid fragment in outer space over the course of billions of years before it crashed to earth in prehistoric times. The abstract geometric patterns of the intersecting crystal structures shimmer gently when the material catches the light, their irregular arrangement making every slice of meteorite subtly different from all others.”

Like past Gyrotourbillon 3 models, this version is powered by Jaeger-LeCoultre manufactured, manually wound caliber 176, which has a 45-hour power reserve. The case is made of 18K pink gold, measures 43.5 mm x 15.8 mm, and is water-resistant to 50 meters. Limited to 8 pieces. (Ref. Q5032441)