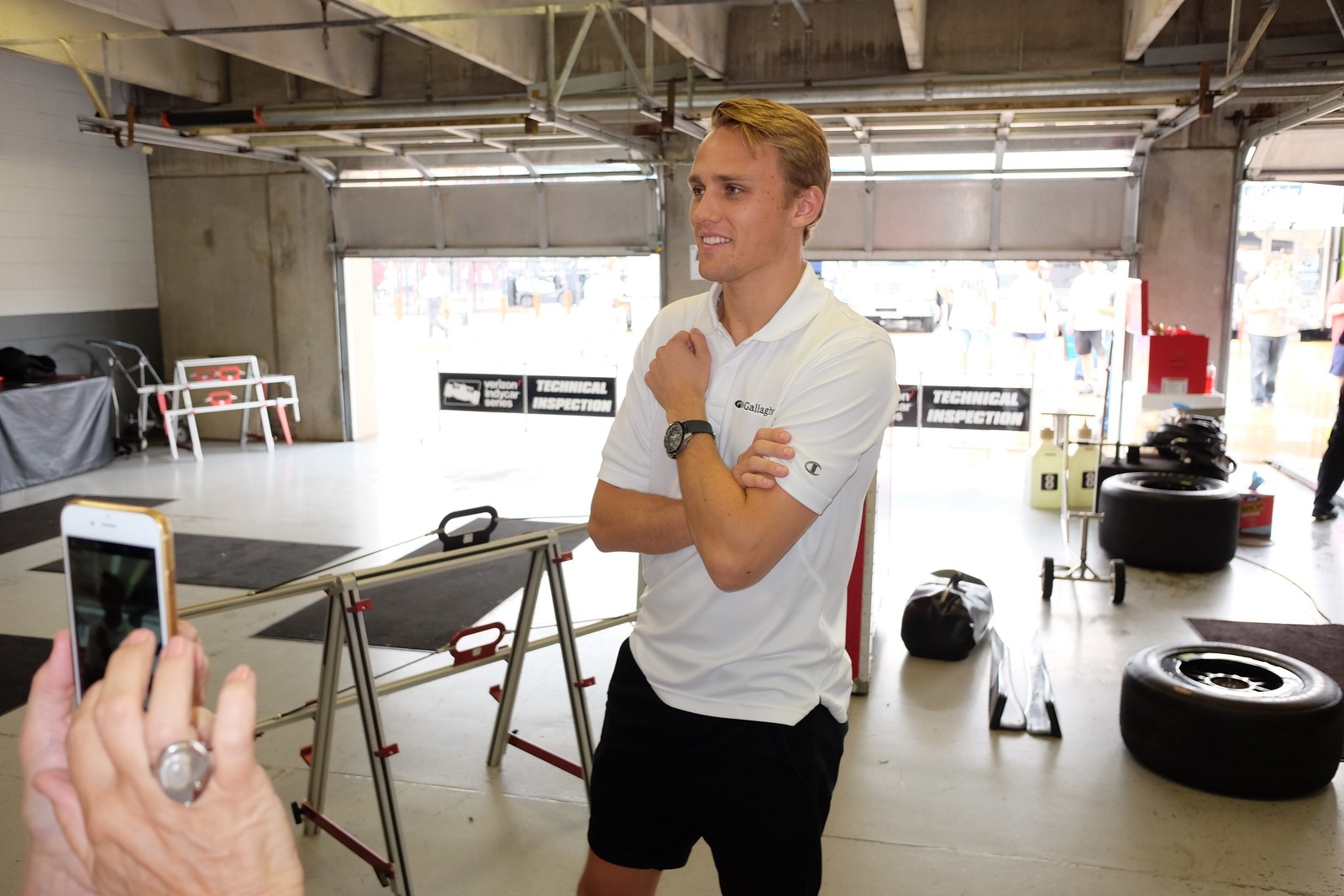 Independent Swiss watchmaker Armin Strom has partnered this year with up-and-coming IndyCar driver Max Chilton to create a timepiece that pays homage to the racer and his team (Chip Ganassi Racing).

Launched at the Firestone 600, which was held a few weeks ago, in Fort Worth, Texas – the new Max Chilton Edition Edge Double Barrel was designed with input from Chilton. “I love a heavier and larger watch on my wrist that still has a sporty feel to it,” says Chilton. Chilton’s number “8” appears on the dial in the small seconds display and the blue on his turbocharged Chevrolet racecar matches the hour numerals on the dial.

The limited-edition piece is, of course, appealing to a fan. And watching Max race in person, would have been nice. But unfortunately, the rainy conditions earlier in the day could not be overcome and the race was eventually delayed. Thankfully, there is more to this story than just the limited edition watch or racing, though.

That Saturday, when I first spoke to Max in the team’s garage area, before the planned start of the race — he explained to me how IndyCars doing 200 mph on an oval track that is even partially wet is not even feasible. Then, practically in the same sentence he instantly shifted to asking about the six-figure Armin Strom tourbillon (loaners) most of us had strapped to our wrists. He said “you have the tourbillon model on” with widened eyes of envy. At that point, I knew he was a serious watch guy.

Yep, just like he knows more about cars than the average person, he also knows about watches, as displayed by his knowledge of different finishing techniques such as perlage and cross-grinding. I mean, how many people outside of the watch industry even know what a tourbillon is? Not many.

There is still more to the story.

While racing for the F1 Marussia team, which is where he was previous to IndyCar (Armin Strom was also a sponsor of that team), he, naturally, learned about Armin Strom watches. And during that time, Chilton became very interested in watches. Which was surely exemplified by the fact that racing and the wealthy people associated with racing are also very often into high-end mechanical watches as well.

Eventually, Chilton and Claude Greisler (the Director of Armin Strom), got to talking about watches and the industry, and Max had been hearing about Baselworld (the world’s largest watch show that takes place every Spring), and he knew he was not racing in March, so he asked to visit them at Basel.

At Baselworld, he was surely blown away by the excitement of the show and the beautiful watches on display, including the full breadth of the Armin Strom watch assortment in person, and finally, during his meeting, he exclaimed: “I am going to buy my first watch today!”

From that point, he put in an order for a customized skeletonized Armin Strom timepiece, to which he would take delivery at a later date. That later date ended up being Monaco, during the annual Formula One race that takes place there. And so, Claude, delivered the watch in-person, along with Serge Michel, the owner of Armin Strom.

While I do not have the exact details, I do know that during the delivery and presentation of the watch, which took place on a boat at Monaco, in front of Max’s friends (he’s a bit of a showman apparently), eight more watches were sold on the spot, as once some of the wealthy collectors saw Max proudly wearing his new Armin Strom skeleton timepiece, they had to have one too.

The Max Chilton Edition Edge Double Barrel comes in a 46.80 mm x 13.20 mm stainless steel case (the same dimensions as the Edge Double Barrel collection launched in March 2016 at Baselworld). With special grooves, the blackened bezel contrasts with the steel case middle, for a sporty look. The lugs and case flanks feature angular cutouts that reduce weight and add to the muscular appearance of the timepiece, which is by no means small – just the way the Max likes it.

Like the case, the movement features geometric components, such as spider-shaped crown wheels. Finishing of the components includes hand-beveled edges and a unique cross-grinding finish that add to the industrial feel of the timepiece.

Under the dial, visible from both the front and back is a 4Hz in-house, manually wound caliber that is good for 8-days (192-hours) of power reserve, thanks to double-going mainspring barrels. Caliber ARM16 has 34 jewels and 194 total components. Functions include off-center hours, minutes, and small seconds. The water resistance rating is 50 meters.

The Max Chilton Edition Edge Double Barrel is delivered with a black alligator strap and double-fold clasp in stainless steel PVD black as well as an additional black rubber strap and is limited to 8 individually numbered pieces. (Ref. ST16-EB.05)