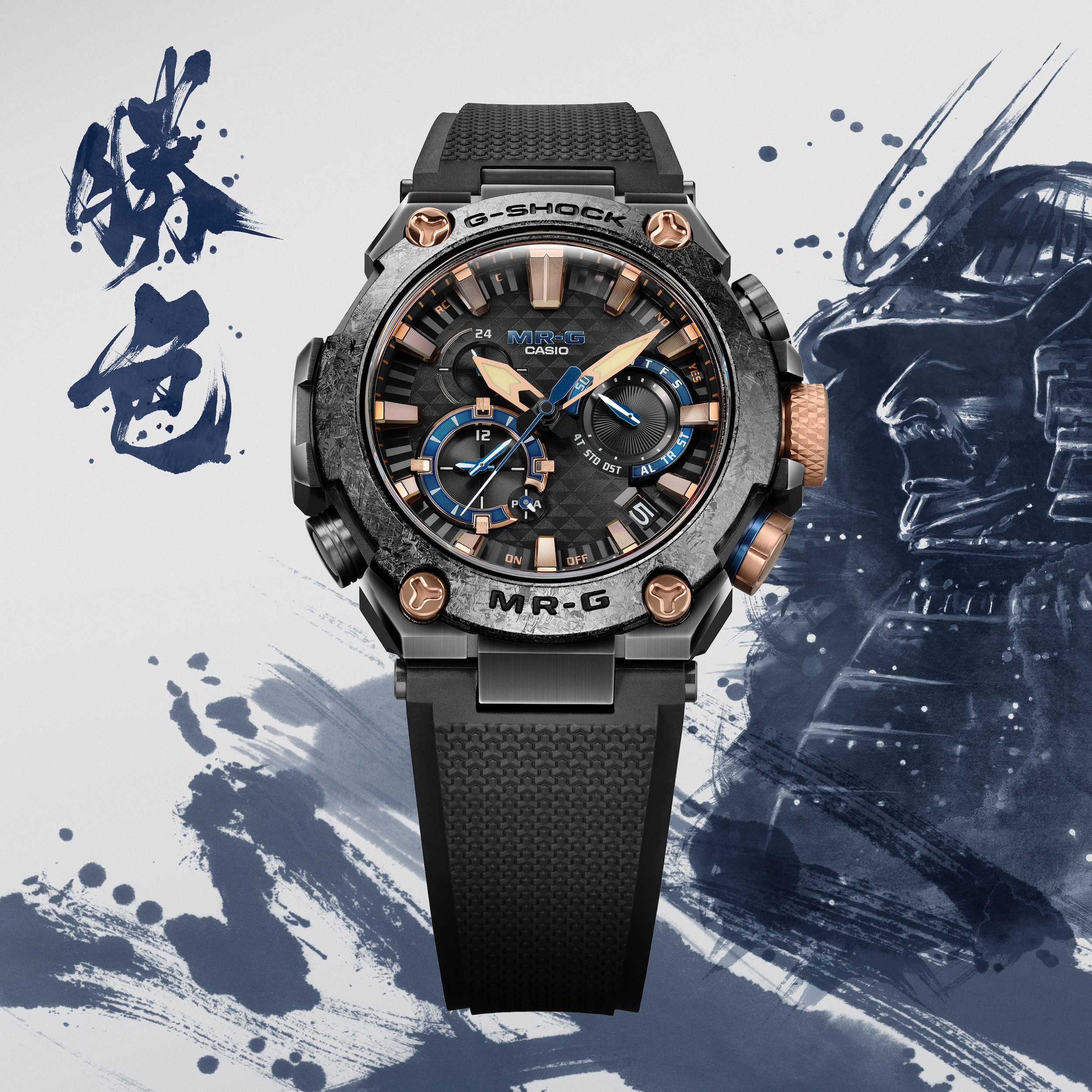 For 2021, Casio has announced two new titanium wristwatches within the high-end G-Shock collection known as MR-G.

The MR-G Kachi-Iro MRGB2000R-1A and MRGB2000B-1A come in prominent black IP plated lightweight titanium cases that measure 49.8 mm by 16.9 mm with a lug-to-lug length of 54.7 mm. Inspired by “kachi-iro,” which references the color of winning and victory in Japanese culture – the dark blue accent color was the preferred hue of native Samurai warriors and was typically used for armor and helmets.

A traditional Japanese scale pattern is used on the surface of the dial, while the flange is crafted to resemble a Japanese fan. Large, sloped hour markers are applied directly to the angled chapter ring which displays hours, minutes, and seconds in conjunction with the central mounted skeletonized Sword-shaped hour and minute hands, and blue and white lacquered second hand. The blue kachi-iro color accents the dial of both, and extends to the bezel and pusher on the version with a metal bracelet.

Both models are equipped with a deep-layered hardened titanium case. However, the MRGB2000R-1A version varies in that its bezel is made of recrystallized titanium. This heat-treated titanium has a distinctive crystal pattern on its surface which resembles nieon Japanese sword blades.

Each MR-G model comes with a Tough Movement that has superior shock resistance to any watch on the market, as well as multi-band 6 atomic timekeeping that kicks in only if there’s no Bluetooth connection. This means that Bluetooth calibrates the watch in most situations, which is extremely precise, and atomic calibration is the fall back method that’s also quite accurate. If needed the watch can also be manually set.

The watches are highly resistant to magnetic fields and water-resistant down to 200 meters and include a locking crown. This is a tough solar movement so sunlight entering the dial fully powers the watch’s battery.

Further functions can be accessed using the dedicated MR-G Connected Smartphone app, such as a graphical display of time reception status, solar power generation status, and internal history updates. In addition, home city/world time swapping, alarm and time settings as well as an expansion to 300 city word time can be controlled. There’s also a phone finder function that allows the user to ping their smartphone from the watch to locate it within a limited range.

The MRGB2000B-1A and MRGB2000R-1A will retail for $3,000 each and will be available to pre-order starting tomorrow at select G-Shock retailers, the G-Shock Soho Store, and gshock.com.