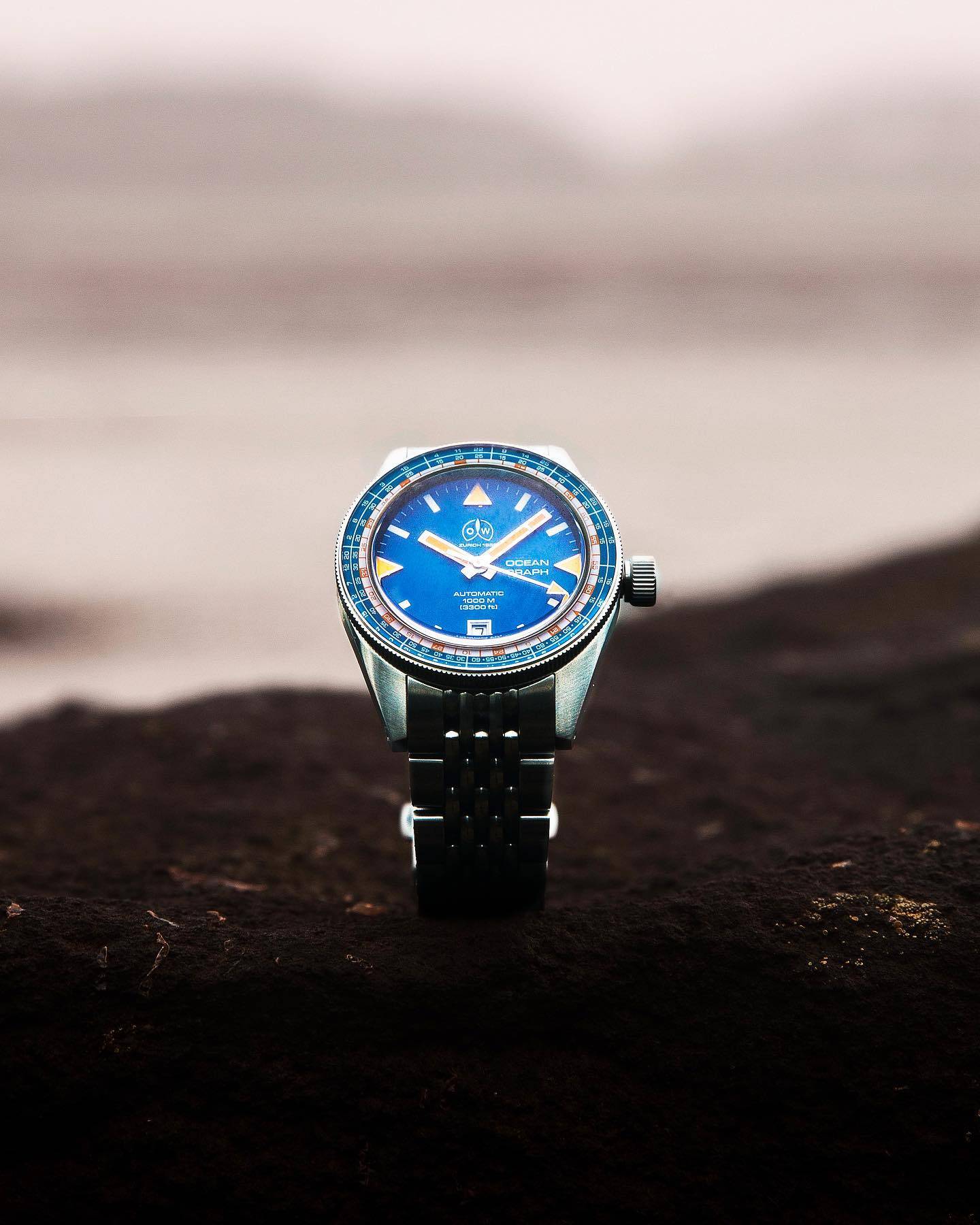 Ollech & Wajs’ latest model, the Ocean Graph, comes in a stainless steel case that’s stamped, machined, and brushed in the Swiss Jura region and with 90% of its total parts coming from Switzerland.

With the C19 virus disrupting the sourcing of parts from Asia to Switzerland, there’s a chance more companies marketing their products as Swiss will increase their use of Swiss sourced components. Only 60% of the total value of a Swiss watch has to be made in Switzerland, which is a point of contention for any brand that conducts most or all of their production in Switzerland.

That Ollech & Waj has such a high percentage is worth noting considering that far more expensive brands use more non-Swiss parts — significantly cutting costs —  and often taking a higher profit instead of passing it on to the end consumer.

The new OW Ocean Graph comes in a  39.56 mm X 15.8 mm stainless steel case that measures 49.5 mm lug-to-lug and has an interlug width of 20 mm. This model maintains the same dimensions as the OW C-1000 that was introduced last year. In fact, the oversized hands and indices are the same. The dial has a new vibrant blue color and orange lume color, though.

A solid screwed caseback, locking crown, and water-resistant rating of 1,000 meters remain as well. As does the high water-resistance rating that’s ensured by a reinforced caseback, a double-thickness case, a 5.6 mm thick, extra-strong, domed sapphire crystal, and a special screw-down crown with four gaskets.

What has changed, however, is the bezel, which features a decompression scale for this model. According to Ollech & Wajs, “The decompression bezel of the new OW Oceangraph has three concentric zones. The most central zone indicates the elapsed dive time, from 0 to 60 minutes (A). It also contains indications for the maximum depth of the dive, carried out in meters (B). In the intermediate zone are marked the dive times (C) for which decompression will be necessary, according to the depth indicated in the most central zone (B). The outermost zone of the bezel indicates the decompression times, in minutes (D), that the diver must respect at a depth of three meters, calculated according to the depth (B) and the total duration of the dive (A).”

The OW Ocean Graph is a tribute to the 1968 Ollech & Wajs Ocean-Graph and is powered by a 25-jewel automatic 4Hz ETA 2824-2 adjusted in five positions with a 38-hour power reserve. The movement is modified with an engraved main plate marked “Ollech & Wajs Zurich 1956” and an OW rotor.

Each watch is assembled to order with an estimated delivery time of three weeks from the ordering date. The first 56 Ocean Graphs sold will be numbered on their crown. The retail price is $1,618 on a single-striped blue and white Slovenian perlon strap and $1,763 on a stainless steel beads-of-rice bracelet. (Ref. OW Ocean Graph)