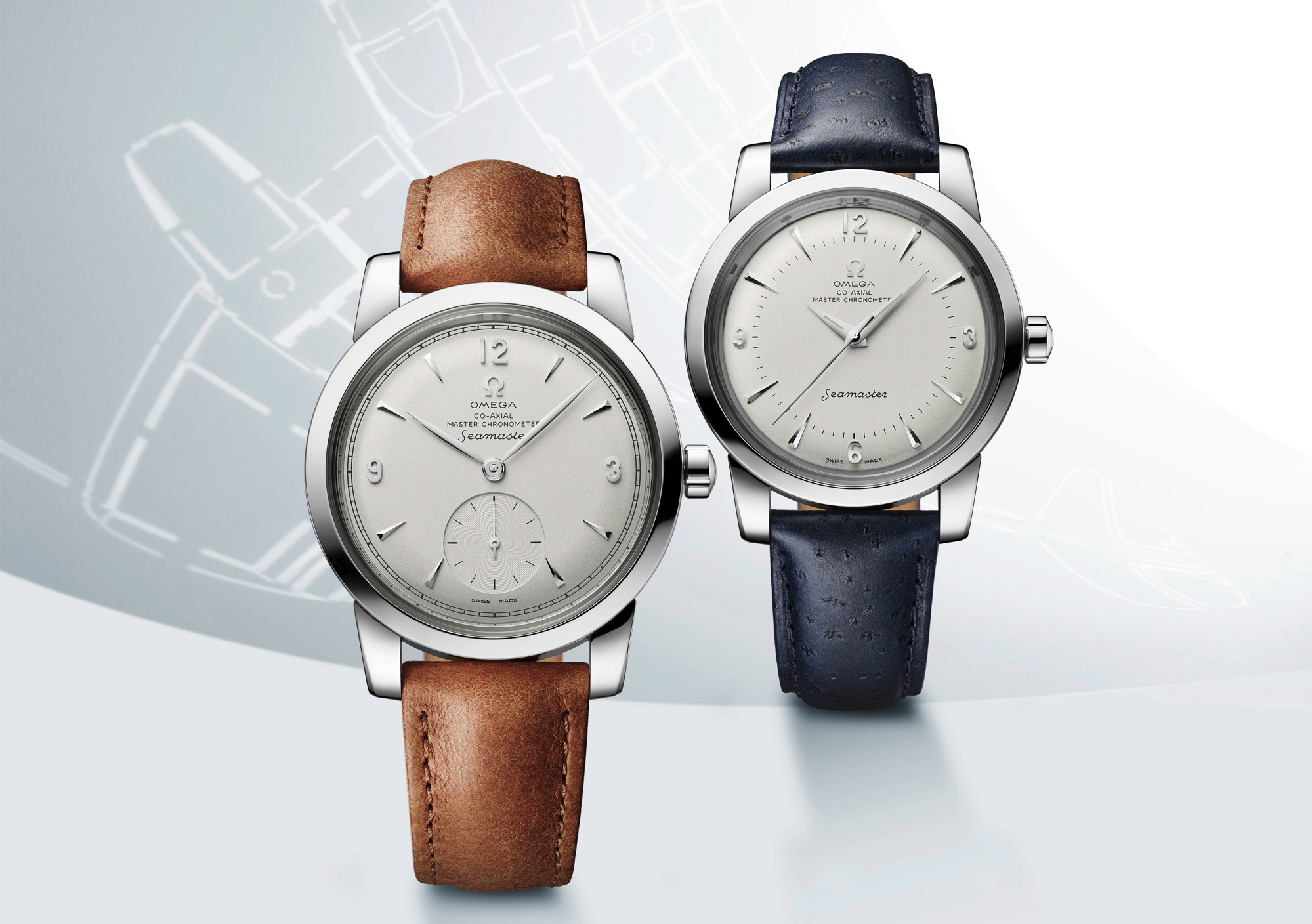 Omega reportedly produced more than 110,000 timepieces for the British Ministry of Defense from (1940-1945) during World War II, which airmen and sailors were said to have trusted for their water resistance and reliability.

The popularity of those military-spec timepieces led to the creation of the Seamaster, Omega’s first collection of watches, in 1948. The Seamster line featured the same robust characteristics as the aforementioned military watches, although despite a design that was more aesthetically suited to civilian life at the time, the new Seamasters were given greater water-resistance than their military counterparts thanks to the use of O-ring gasket technology, which would eventually go on to become a standard in the industry.

On the 70th Anniversary of the Seamaster (2018), in addition to redesigning the Seamaster Professional Diver 300M collection, Omega has created two limited-edition tribute models: the Seamaster 1948 Small Seconds and the Seamaster 1948 Central Second. Both have the aesthetics of the original watches, however, inside Omega has fitted these special Seamasters with the latest Master Chronometer movements, caliber 8804 and 8806, respectively.

The METAS-certified Co-Axial chronometer movements, which have only minor superficial differences, both beat at a rate of 3.5Hz (25,200 vph) and feature 55-hours of power reserve, 35 jewels, a silicon balance spring, free-sprung balance wheel, rhodium-plated rotor that winds in both directions, rhodium-plated bridges, Geneva waves in arabesque, and blackened screws, barrel, and balance wheel.

Each version is presented in a 38 mm x 11.20 mm stainless steel case, with a polished fixed bezel, opaline silvery domed dial, and a polished crown embossed with the vintage Omega horseshoe emblem.

Setting the two Seamasters apart visually are diamond polished Dauphine-shaped hands on the Central Seconds version and Leaf-shaped hands on the Small Seconds version. Additionally, the former has a printed minutes track inside the hour chapter ring, and the latter has a printed railroad minutes track on outside of the hour ring.

The Central Seconds version is further differentiated by the positioning of the printed “Seamaster” logo at 6 o’clock along with an Arabic numeral, whereas the Small Seconds model has no hour marker at 6 o’clock, and “Seamaster” is printed at 12 o’clock. The Seamaster Center Seconds also features lume filled hour and minute hands, as well as within its indices, whereas the Seamaster Small Seconds is sans lume.

The only other differentiating features are the strap (brown versus blue-gray), both of which have buckles that include a vintage Omega logo, and the caliber of movement inside.

When you flip the watch over you see a flat sapphire crystal that has been laser engraved and lacquered by hand with a 70th Anniversary logo, and a Chris-Craft boat and Gloster Meteor aircraft, the first jet plane used by the Royal Air Force.

Interestingly, thanks to an oriented screw-in caseback, the engraved wording sits in a horizontally aligned position. Omega has trademarked this patented technology with the name “NAIAD LOCK.”

The watches are presented in their own special collector’s box made of soft brown leather and kept upright but easily moveable thanks to a magnetic floor. A spare NATO strap, leather strap, and strap changing tool are also included. Each model is limited to 1,948 pieces.

The water-resistance rating is quite low (60 meters) for any watch calling itself a Seamaster, as this does not even meet the minimum 100-meter water-resistance prerequisite to be considered a true ISO6425 dive watch. But then again these are not meant to be true dive watches. And besides, 60 meters will work fine for most uses, including swimming, snorkeling, and skin diving. Overall, the Seamaster 1948 is a limited collector’s piece that can be used for leisurely activities and will double as a dress watch.