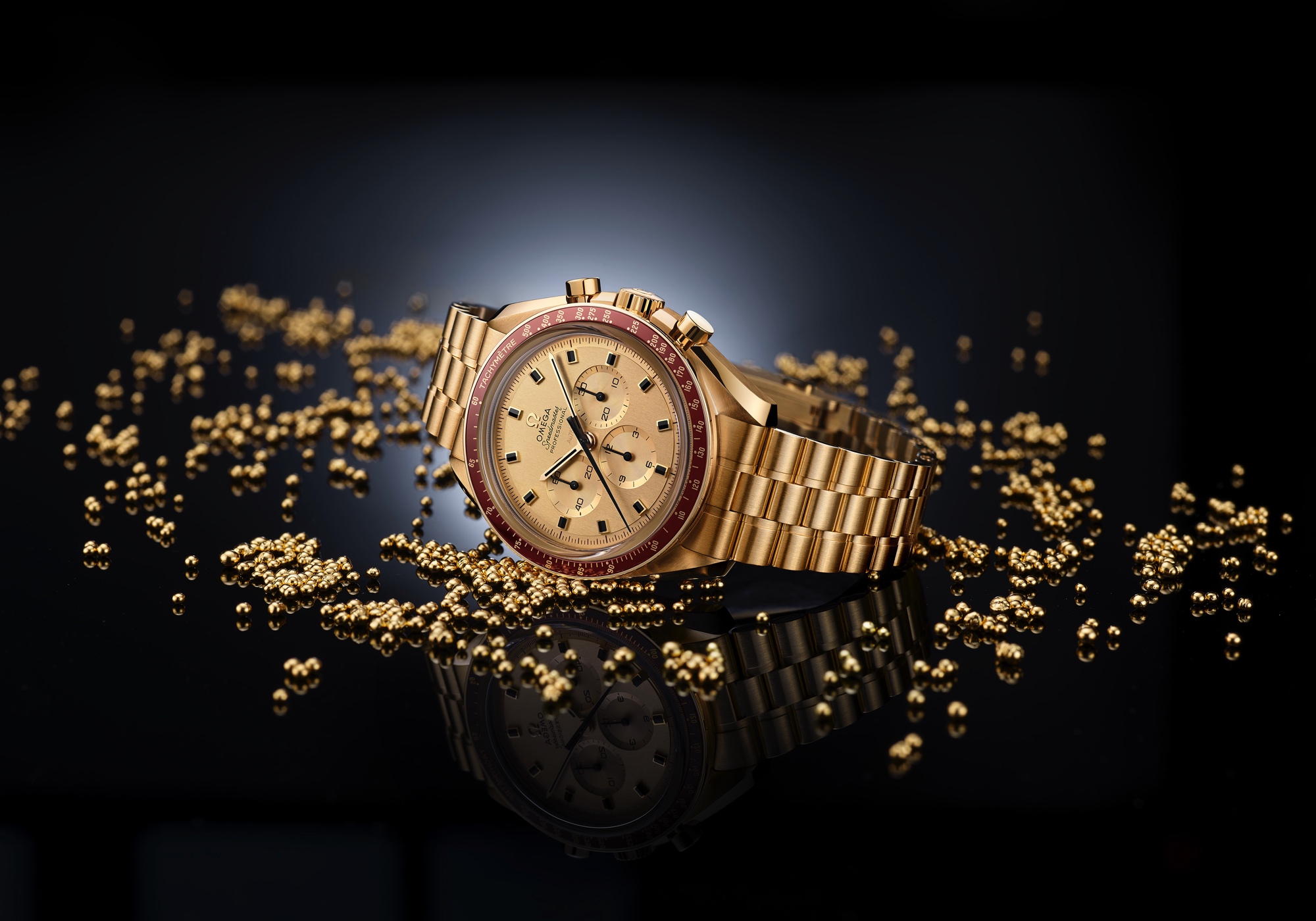 On the occasion of the 50th anniversary of the Speedmaster being worn on the moon – in 1969 Neil Armstrong and Buzz Aldrin became the first humans to walk on the lunar surface – Omega plans to release a number of special watches in 2019 to commemorate one of the most important events in the history of space exploration.

Based on the historic Speedmaster Ref. BA145.022, which was produced after the moonwalk – to celebrate the success of Apollo 11 – the new version will carry over many of its predecessor’s aesthetics, including the same 42 mm diameter 4th generation case with twisted lugs.

One subtle change, however, is the use of a new trademarked 18K gold alloy called “Moonshine” gold which has a paler yellow hue than traditional yellow gold.

Additionally, the watch is powered by the brand new manually wound Master Chronometer caliber 3861. As the caliber number suggests, it’s based on the caliber 1861, which in turn is based on the 861 from the watch used during the 1969 moon landing. The 3861 has a Co-Axial escapement, used for the first time in this venerable movement, whose design originated at Lemania, prior to being acquired by Omega many years ago. A silicon Si14 balance spring was also added, which was required in order to get the specs up to the Master Chronometer standard (which Omega invented). Visually, the movement (pictured) features a gold-plated main plate and bridges, and burgundy-colored markings which match the bezel.

Speaking of the bezel, it’s now made in a burgundy ceramic [ZrO2], as opposed to anodized aluminum, like many Omegas that have been switched from aluminum to ceramic bezels over the years.

The brushed-polished bracelet has five–arched-links-per-row and a grooved clasp, with an applied vintage Ω emblem. Notably, there are also vintage Omega emblems on the dial and crown.

A similar vertically brushed step dial in solid yellow gold is used on the new model, now marked with “Au750” which is the symbol for gold. The hand applied, black-gold indices are the same (a short almost square shaped design), however, the printed black minute track is slightly different, and the hour and minute hands, previously a black varnish design, are now a bit thinner, and are gold, filled with black varnish. The black varnish central chronograph seconds hand is the same on both the old and new versions.

This is a luxurious numbered limited edition, in solid 18K gold, so the packaging has been made specially and consists of a crater box inspired by the original packaging of the BA145.022 model. The panels of the box are in gray ceramic with 3D printing of the lunar surface. Since every panel is structured differently, no crater box will be alike. Furthermore, the top panel of every box is printed with the image of the Sea of Tranquillity and the landing position of Apollo 11.