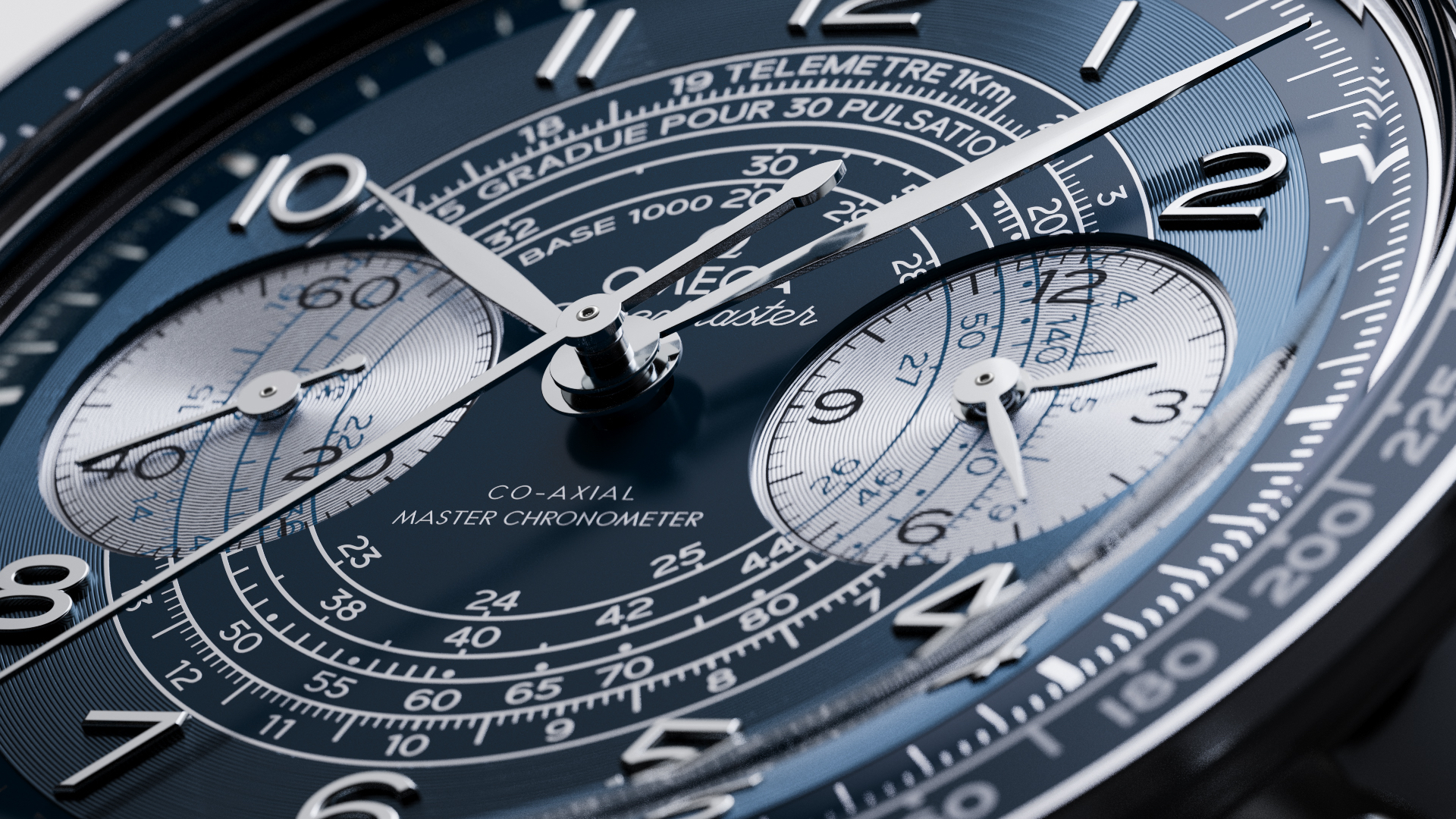 The Speedmaster Chronoscope features Omega’s signature twisted-lug case design — that’s been upsized slightly to 43 mm in diameter when compared to the standard 42 mm Speedmaster Professional. It’s worth noting that the case diameters have been rounded to the nearest millimeter, so the real-life difference between the two sizes could actually be more or less than one millimeter.

Six variations of the Speedmaster Chronoscope have been announced in stainless steel (blue dial with silver counters, white dial with blue counters, and white dial with black counters), and each comes with either a newly designed stainless steel bracelet with toolless micro-adjustment ($8,600) or leather strap ($8,300). There’s also a single reference offered in Omega’s proprietary 9K (37.5% purity vs. 18K gold that’s 75% pure) bronze-gold alloy, only available on a leather strap ($14,000).

All versions have applied Arabic numerals and leaf-shaped hands. All six of the stainless steel models have anodized aluminum bezel inserts, in black or blue. The bronze-gold version, however, has a brown insert, and instead of anodized aluminum, is made of scratch-resistant ceramic material.

Inspired by a design dating back to the 1940s, Omega has produced a dial with a bi-compax layout, with a printed “snail” style telemeter (outermost ring), pulsometer (inside the telemeter), tachymeter (the two innermost rings) which work in unison with the tachymeter ring printed on the anodized aluminum bezel.

Uniquely, the elapsed time of the chronograph minutes and hours are calculated in a single subdial on the right of the dial. Omega has offered combined chronograph counters on some models for years, however, this easy-to-read configuration (the includes 60-minutes and 12-hours totalizers in one subdial), surprisingly, is not common in the industry. It’s made possible thanks to the all-new Omega caliber 9908.

Beyond the retro-styled dial, Omega’s Co-Axial Master Chronometer caliber 9908 is the main highlight of the Speedmaster Chronoscope release. The movement uses a lubrication-free silicon balance spring and free-sprung silicon balance wheel that together with other measures, results in resistance to magnetic fields up to 15,000 gausses. Two barrels, mounted in series, and protected by an “anti-wear” DLC-coating coating, offer a maximum power reserve of 60 hours.

The manually wound 44-jewel movement is equipped with a column wheel. It has a traversing balance bridge for enhanced robustness and improved aesthetics. Being that this is manually wound, visibility through the screw-in sapphire crystal caseback is unobstructed, except by the large three-quarter plate style bridge. The main rhodium-plated bridge is treated with Omega’s signature Arabesque Geneva waves. To match the blackened barrels and free-sprung balance wheel, all the visible screws have been blackened.