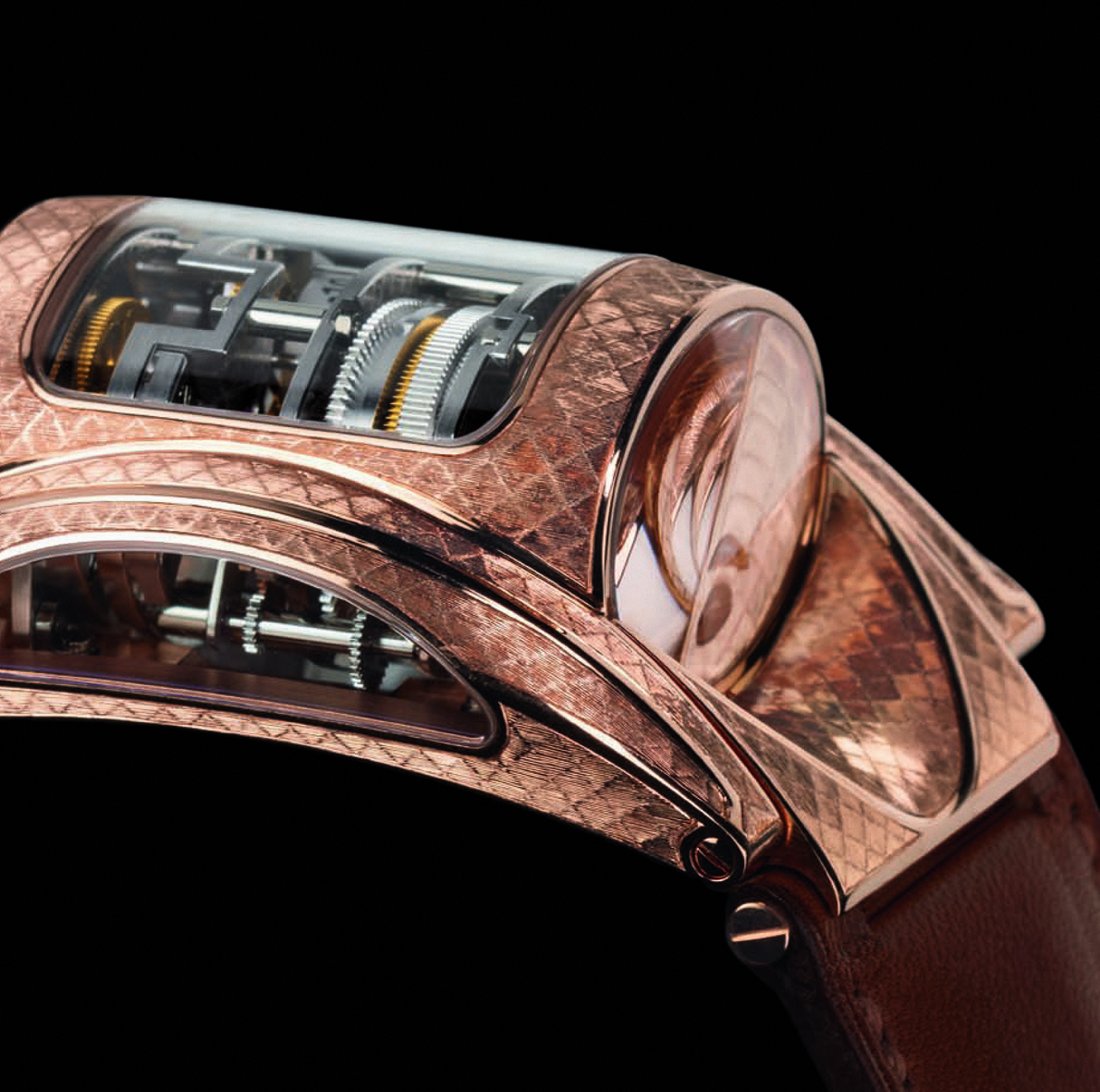 Parmigiani Fleurier introduced the Restoration collection at SIHH 2010. Below is the official press release and lots of interesting images. Michel Parmigiani says, “It is a rare pleasure to restore a timepiece. Setting it free from the ravages of time and man equates to bringing it back as a temporal truth essential to our memory.”

These days, the watchmaking industry only very rarely has recourse to the art of restoring old pieces. Mastery of its secrets is now becoming a prime asset for those involved in the industry. At Parmigiani Fleurier, restoration has never ceased to be the soul of the brand.

Decisive Encounters
In addition to being a passion that has remained alive for thirty years, restoration is seen by Parmigiani as a constant dialogue between the excellence of the past and the quest to use its expressions in watchmaking of the future. But it is above all a sequence of key encounters. Firstly with the genius of the masters of yesteryear, but above all with exceptional private collectors possessing an undiminished passion for period watchmaking gems.

At the end of the Seventies, major collectors from Basel, and then Ephrem Jobin, the first curator of Château des Monts, would put their faith his talent for restoration, entrusting him with great pieces early in his career. Conscious of the importance of the historical dimension, Michel Parmigiani fashioned his own methodology which sets him apart: a constant balance between the mechanical functionality of the piece and conserving the know-how of the past.

This ethic was a decisive factor when Ephrem Jobin, at the end of his career, entrusted him with the continuation of the maintenance work on the Maurice-Yves Sandoz collection. This provided Michel Parmigiani with an extraordinary opportunity to come into contact with treasures of priceless historic value, and to meet Pierre Landolt, Chairman of the Sandoz Family Foundation, whose trust from the Eighties onwards would mark the beginnings of an exceptional watchmaking adventure, with the creation of the Parmigiani brand in 1996.

The ethics of Parmigiani. A desire to confront history.
A restoration workshop dedicated to masterpieces of the past, in the very heart of a contemporary haute horlogerie manufacture, is a unique concept. This underlines to what extent the demand for excellence shapes the day-to-day work of the Parmigiani Fleurier watchmakers.

The investigation phase
Mechanical objects born of the genius of past masters must be restored in keeping with their methods. An essential prelude to understanding the masterpiece requires a long research phase to be undertaken, before even touching the piece. With objects often unsigned or unique in their genre, the restorer has to trawl through works and museums to track down any related pieces that might give an indication as to the mechanism’s workings, or even play at being Sherlock Holmes, detecting some traces or imprints left by friction from a wheel that is no longer there. Hence before dismantling the piece, the restorer spends plenty of time stripping it down mentally…

Immersing themselves in the past. The expert craftsmen must immerse themselves in the know-how and skills of the past in order to understand them, and to achieve a faithful reproduction. To this end, they must have perfect mastery of the knowledge of related branches, such as goldsmithing, enamelling, chisel engraving, gilding methods or glassworking.

One by one, each feather was delicately straightened.

Conservation
Depending on a piece’s state of conservation, a long time may be spent patiently cleaning it.
Highly spectacular oxidation of components often prevents the movement from working properly. Hence a meticulous task of rust removal and polishing begins. The “Perrin Frères” signed watch is a good example of this. The bells, posts, mobile stars, pinions, springs and index adjuster all had to undergo complete rust removal treatment.

Sometimes, the restorer deems it preferable to do all they can to conserve an essential component of the mechanism rather than making a replacement from scratch. This was the case with the leather bellows for the Mirror with songbird by Frères Rochat. This incredibly rare original had a few leaks which prevented good sound quality from the songbird. The pipes between the bellows and the whistle were resealed.

On the exceptional Fabergé Peacock Egg, a highly attentive and delicate restoration job recently finished by Parmigiani has now enabled the automaton to work harmoniously once more; the peacock moves on its two legs, and fans out its tail feathers as it goes round. Retouching of its enamel, deliberately visible, also brought back a forgotten shine.

Reconstruction
The worst ravages of time are often nothing in comparison to the damage caused by an inexpert hand.

When reconstructing, it is essential for Parmigiani to backtrack correctly, and not modify the original. A complete written and photographic dossier retraces all the steps, always differentiating the reconstructed parts from the others.

In the case of the “La Cueillette des cerises” pocket watch, unsuccessful previous work had caused considerable deterioration. Several components of the mechanism had been tinkered with and soft-soldered, causing irreversible oxidation of the steel.

The Yousoupoff Egg, an enamelled clock with rotating ring made in the workshops of Carl Fabergé, is another good example. Several broken components that were still present in its mechanism signed “Hy Moser &Co” were able to be rebuilt identically by the restorer thanks to measurements and 3D computer diagrams. The winding pinion, winding ratchet and barrel arbor, for example, had to be reproduced.

Double time zone pocket watch, 1870
Two hour indicators on the dial, one with Roman numerals and the other with Arabic numerals, are controlled by two movements mounted on a single main plate. Winding is via the crown in either direction for each mechanism.

Tonda Hemispheres. 2007. Offering a modern outlook.
Since all the complications of the past 500 years have passed through the hands of the restorers at Parmigiani, the brand has an unrivalled knowledge of their mechanical intricacies. Indeed, adapting the mechanical complication to today’s requirements is an exercise it is fond of. The Tonda Hemispheres was invented by Parmigiani to provide a second complete time zone, with the hour and minute, particularly easy to use, synchronised and featuring independent setting. A considerable number of destinations with a half-hour or three-quarters of an hour difference from GMT have finally found their time marker.

The Yousoupoff Egg. 1907.
This enamelled clock with rotating ring was made in Saint-Petersburg in the workshops of Carl Fabergé. As with so many works of this artist, the egg shape is used to contain the watchmaking movement, in this case by Henry Moser. The dial in the enamelled area on which the hour is displayed contains a very rare feature: the Roman numeral is indicated by the inscription “IV” rather than “IIII”, traditional in watchmaking.

Cat and Mouse clock. 2010. Reviving a tradition.
In tribute to the exceptional talent of Edouard-Marcel Sandoz, the famous figure and animal sculptor, painter and watercolourist, Parmigiani is creating an incomparable piece called The Cat and Mouse. By bringing to life a stylised cat ready to bound on its prey from a block of solid onyx, Parmigiani is reviving the exceptional vital force that animated the works of Sandoz. Its lean, geometric outlines make a clear reference to Art Nouveau style.

The mechanism of the automaton clock drives the circular motion of the cat in a one-hour circuit. Every time the feline falls upon the white gold diamond-set mouse, the latter leaps away, constantly escaping. To make this animation even more fun, the rodent’s jumps come at irregular intervals. The lateral hour ring turns through a 60-minute rotation, while a fixed claw indicates the hour: a nod to the fantastic tradition of the animated mechanical objects of the 18th Century, whose sole purpose was to entertain and delight the spectator.

“La Cueillette des cerises” chiming watch. 1800.
This enamelled pearl-adorned pocket watch is a marvellous illustration of the workings of a pair of Jacquemarts in Roman costume. They strike a bell masked with an enamelled rose. Its back, also enamelled, represents the cherry picking referred to in the title. It is a very rare example of a Jacquemart piece with a double-strike repeater chime.

Fibonacci watch. 1996. Safeguarding the art forms.
In 1996, in honour of one of the greatest mathematicians of the Middle Ages who, amongst other achievements, was behind the introduction of Arabic numerals to Europe and the so-called “Fibonacci” sequence giving rise to the Golden Number (1.618), Parmigiani made the first sketches of the Fibonacci savonnette watch. Celebrating the mechanical complication, it reveals a minute repeater coupled to a perpetual calendar.

Fibonacci watch. 1996.
Inspired by the art forms that the Parmigiani restoration workshop masters in its day-to-day work, the watch case-backs are adorned with engravings, translucent grand feu enamel and set with precious stones. Parmigiani’s haute horlogerie workshops have decided to celebrate these beauties and bring them back to life in 2010.

Bugatti Type 370 Centenary watch. 2009. Celebrating crazy ideas.
Inspired by the craziest mechanical designs in watchmaking history, the Bugatti Type 370 watch has completely revolutionised the understanding of a watch, and wowed enthusiasts since the presentation of its prototype in September 2004. Unique in watchmaking history, it was the first to set its movement transversely, with its design and components deliberately reminiscent of the world of motoring.

Now an established mechanical icon, the Bugatti Type 370 required five years of intense research, shared by around fifty specialities, all within the Parmigiani Fleurier manufacture. The Bugatti Type 370 Centenary model, created in honour of the 100th anniversary of the Bugatti firm, is a milestone in this genuine watchmaking adventure. 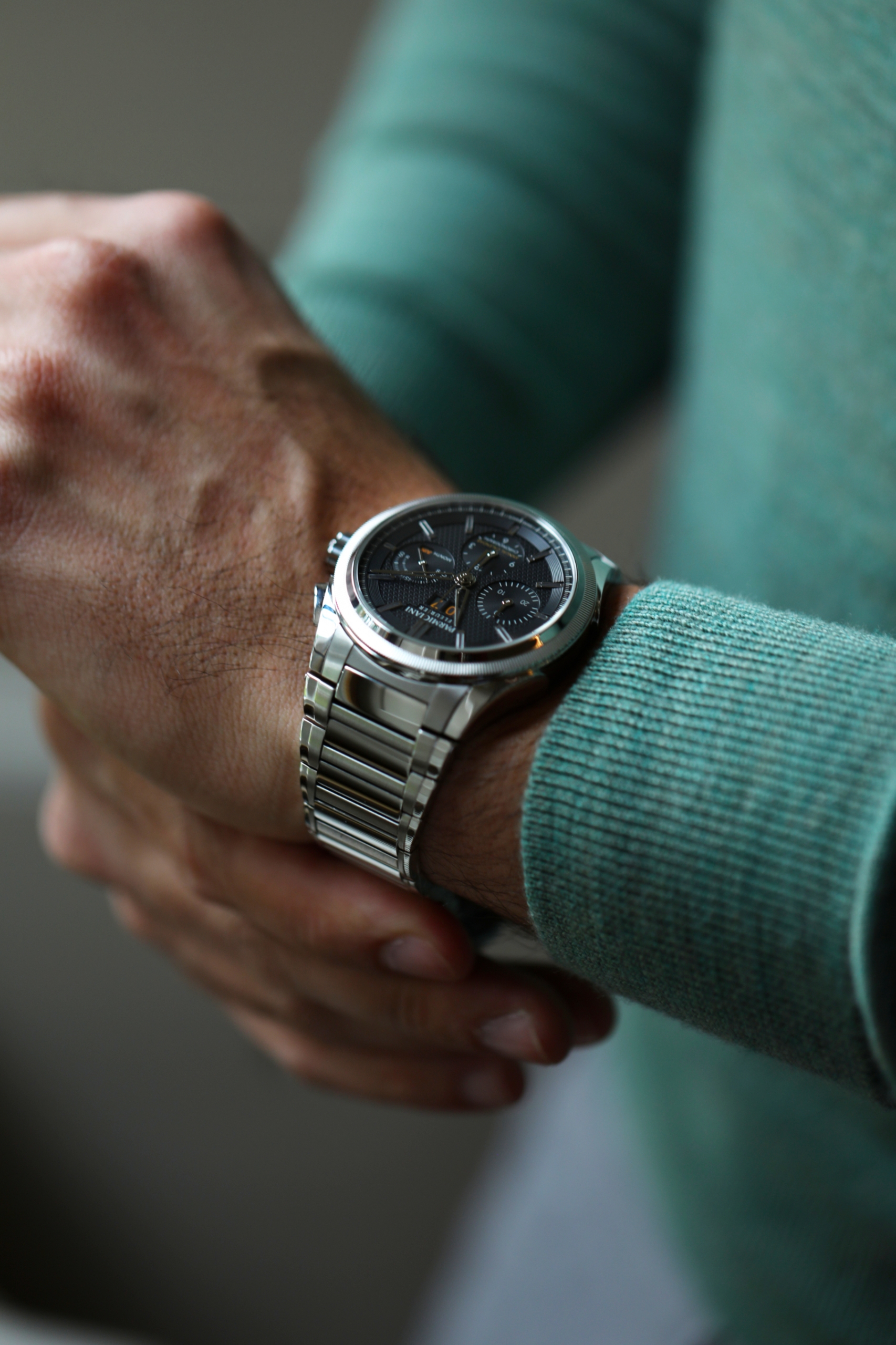 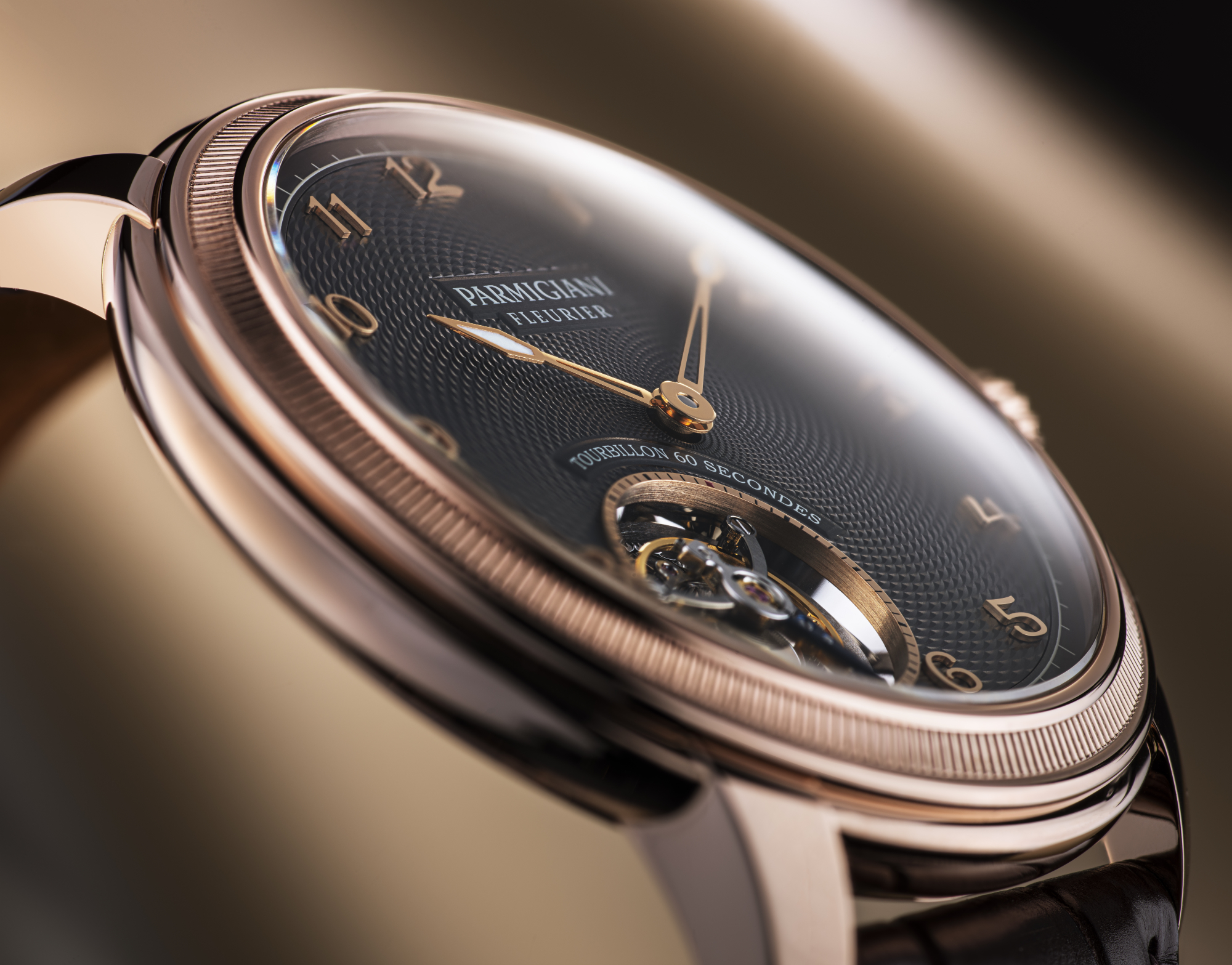 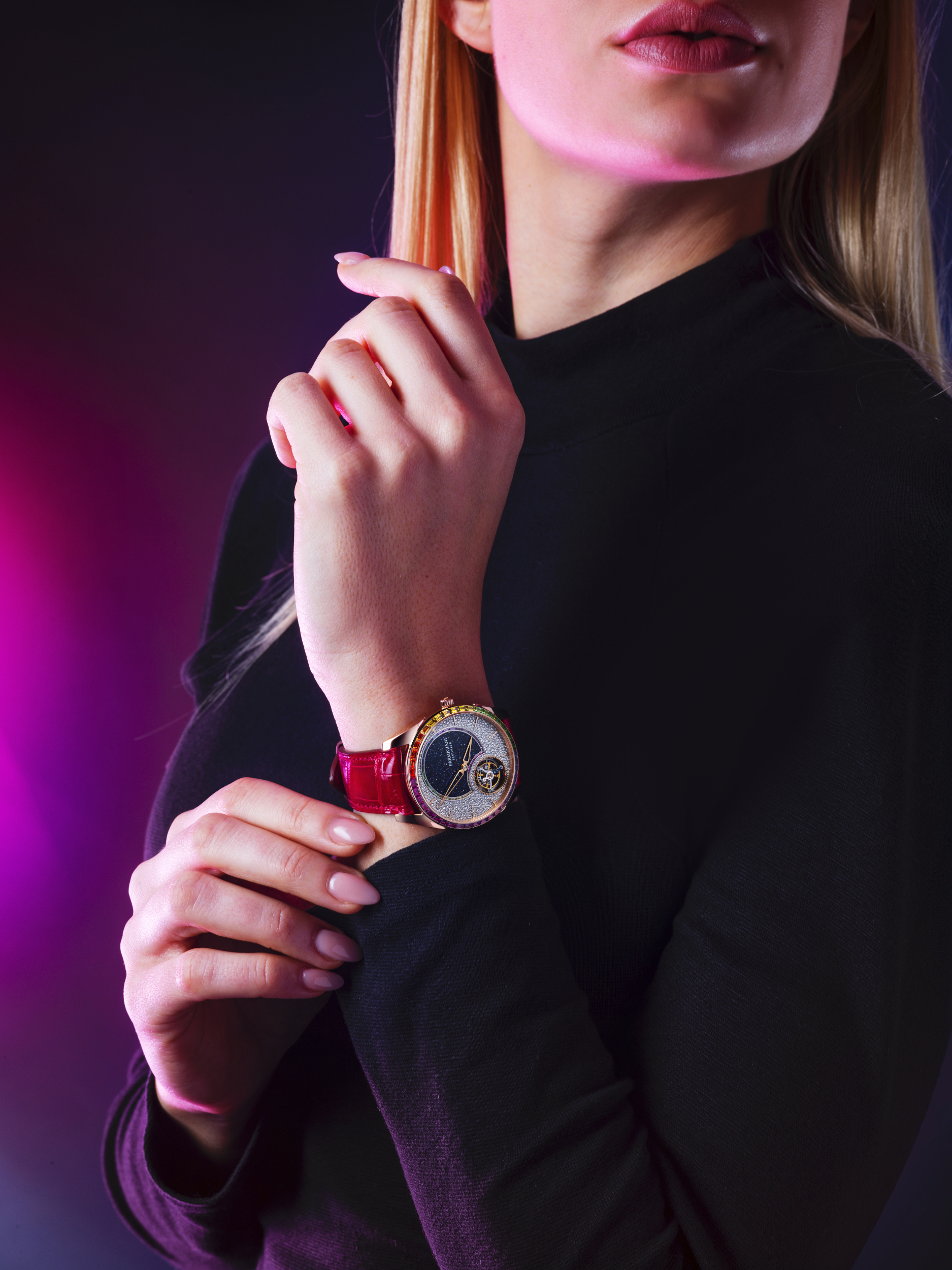