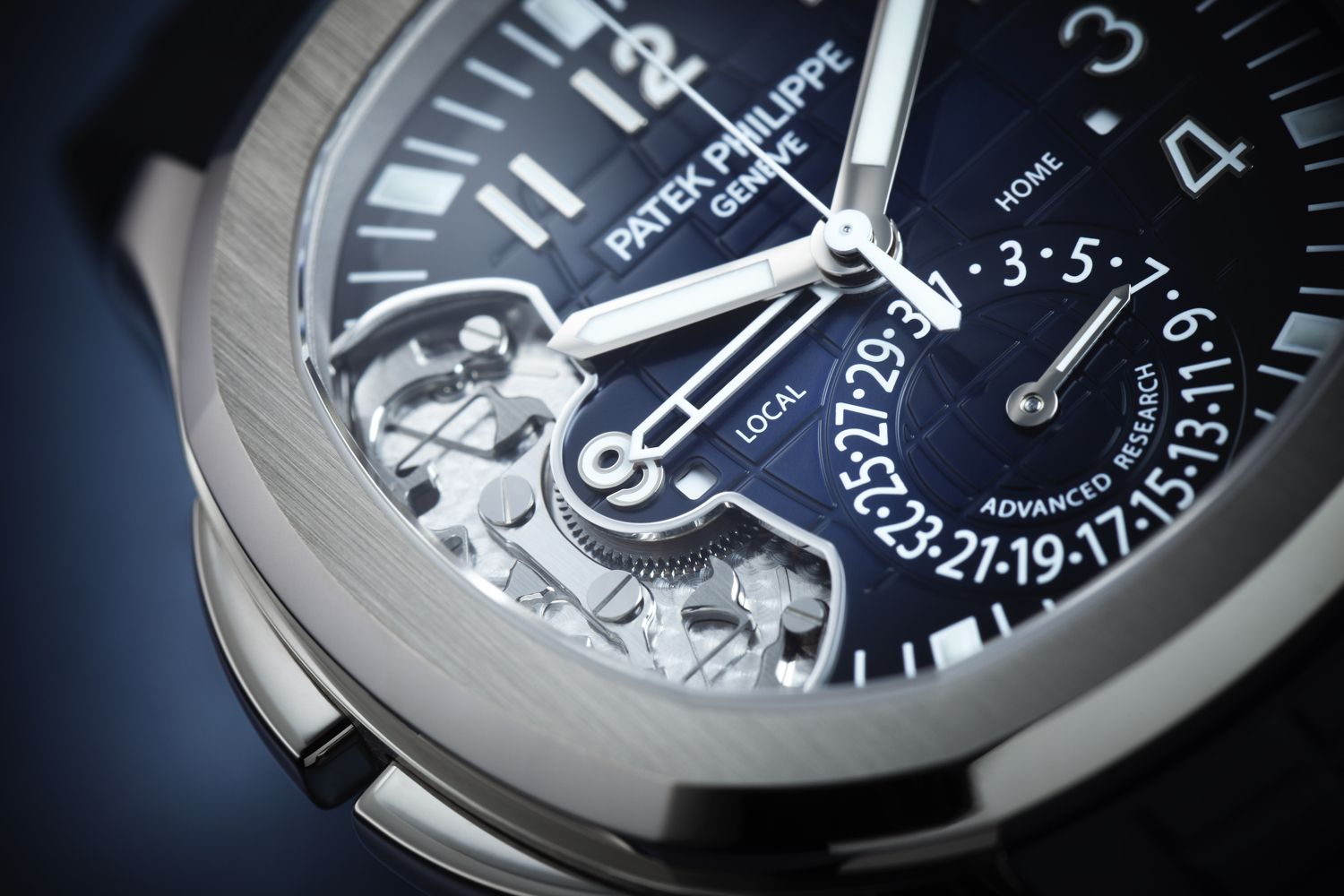 This year marks the 20th anniversary of Patek Philippe’s other sports watch – not to be confused with the Nautilus – the Aquanaut. As a tribute, Patek Philippe released two new versions at Baselworld, that will go on sale later this year.

One represents the first men’s Aquanaut to be offered in white gold. The other is Advanced Research model that features some of the manufacture’s most advanced horological innovations.

A 42.2 mm diameter white gold case, with a night blue colored dial (constructed of brass and PVD coated with blue to black hue towards the perimeter), gives a new appeal to the Aquanaut line.

Patek’s caliber 324 S C movement, which is a mere 3.3 mm in height, allows for a watch that is just 8.25 mm in thickness. With a tested deviation of -3 to +2 seconds per day, the movement rate is excellent.

The finishing of the movement is no less impressive and features Geneva striping, countersunk and polished bores, gold-filled engravings, and round-chamfered, polished edges that emphasize the shapes of the individual bridges. A 21K gold rotor, decorated with perlage and Geneva circular graining, as well as an engraved Calatrava cross, winds the watch automatically for a power reserve of 45 hours.

At the beginning of the 2000s, Patek Philippe launched a program designed to research new materials, new manufacturing technologies, and new fundamental concepts. “In this context, the researchers at Patek Philippe often collaborate with colleagues at other respected manufactures but mainly focus on close cooperation with independent development facilities such as the CSEM research laboratory and the Ecole Polytechnique Fédérale de Lausanne (Swiss Federal Institute of Technology Lausanne) that operates globally leading micromechanical and electronics research institutes in Neuchâtel at the foot of Switzerland’s Jura mountain range,” according to the company.

One of them is the new Spiromax® balance spring made of Silinvar® apart from the patented terminal curve (Patek Philippe boss at the outer end), its geometry now also features an inner boss near the integrated collet. The second is a flexible mechanism crafted from conventional horological steel that is used to set the second time zone in world-time watches.

“After several years of research, Patek Philippe is introducing the new Spiromax® balance spring with an improved geometry based on the addition of an inner boss, a bulge at the inner end of the spring for which several patents were awarded. It was developed within the scope of the Patek Philippe Advanced Research concept and offers ideal prerequisites for mastering one of the fundamental problems affecting oscillators with balance wheels and hairsprings: isochronism.

Ever since Christiaan Huygens invented the balance spring watch in 1675, the brightest minds in the field have been striving to perfect its isochronism. A short explanation of the term isochronism might be helpful: The balance wheel is a rotating pendulum that oscillates back and forth between two points of maximum deflection. The angle between the points of maximum deflection defines a semi-oscillation and is referred to as amplitude. If every semi-oscillation has the same duration regardless of its amplitude and the orientation of the watch, the balance is isochronous. This is an ideal situation compromised by many intrinsic and extrinsic influences.

The second of the two innovations presented here relates to a steel part manufactured with conventional production methods. This is a clear indication that work within the scope of the Patek Philippe Advanced Research program goes beyond new materials and technologies but also focuses on the optimization of already existing mechanisms to further evolve watchmaking artistry with regard to long-term reliability and rate accuracy in a balanced approach that melds tradition and innovation,” according to Patek Philippe.

Highlighting the new flexible time-zone mechanism is a cut-out from 8 o’clock to 11 o’clock. This model is limited to 500 pieces.