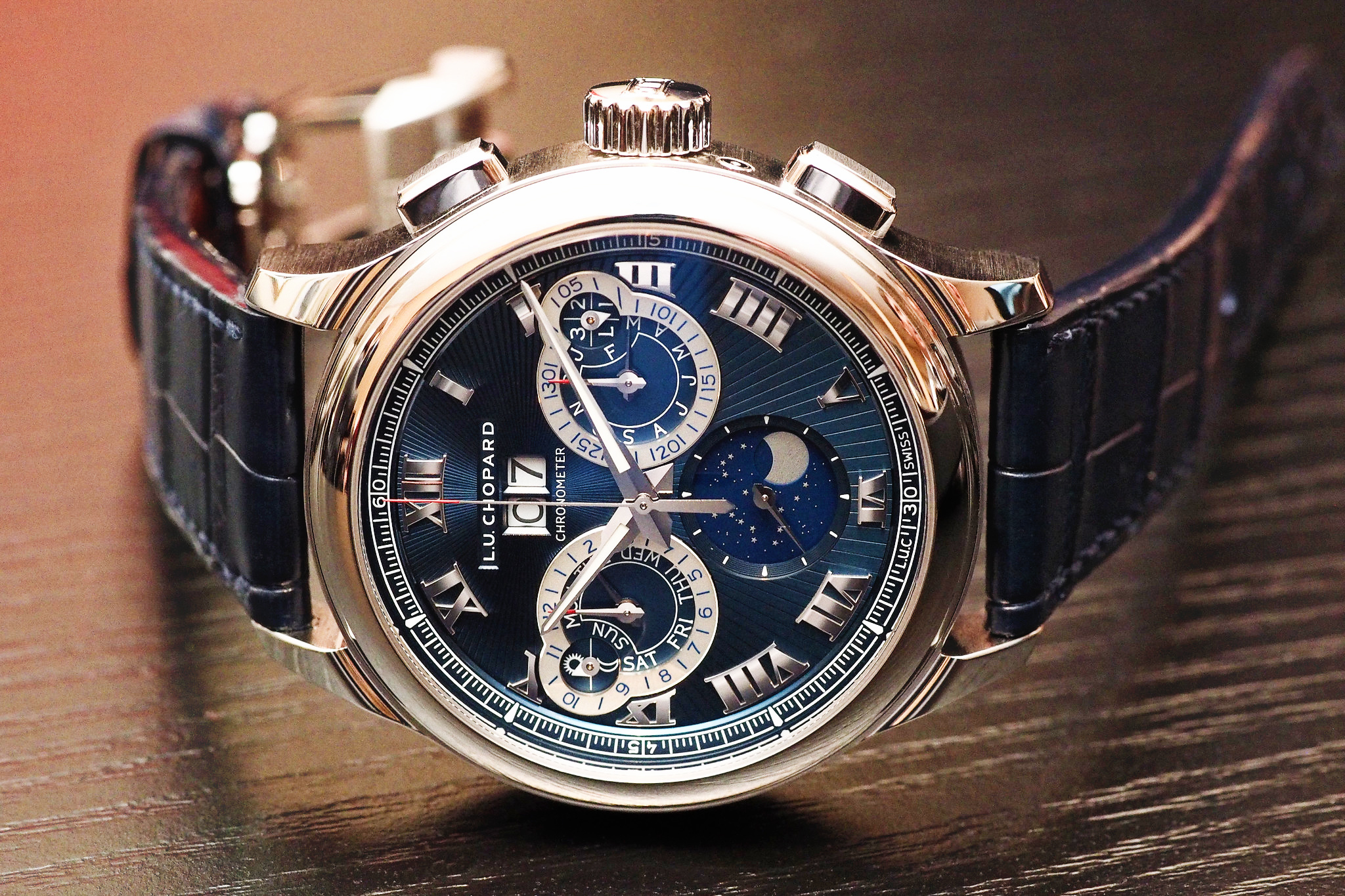 Originally produced in 2005, the Lunar One comes in a 43 mm x 11.47 mm case finished with vertical satin-brushed sides along with a polished bezel and lugs. Large applied Roman numerals are mirror-polished give the watch an unmistakable look while enhancing legibility. The moon phase indicator at 6 o’clock is not simply a disc rotating beneath the dial but a number of components indicating the exact appearance and position of the moon as it orbits, with 122-year accuracy.

Underneath the dial is automatic caliber L.U.C 96.13-L which features a 22K micro-rotor that winds the watch up to its maximum 65-hour power reserve. Each movement is hand-finished with beveled bridges, Geneva stripes, circular-grained mainplate, and mirror-polished steel parts. The 4Hz movement (33 mm x 6 mm) is highly complicated and consists of 355 components and 32 jewels.

Also presented in a platinum case with a blue sunray dial, the L.U.C. Perpetual Chrono is one of Chopard’s most complicated timepieces, boasting both perpetual calendar and flyback chronograph functions. The case measures 45 mm x 15.06 mm which houses 4Hz hand-wound caliber L.U.C 03.10-L. In addition to its perpetual calendar and column-wheel chronograph, within the 33 mm x 8.32 mm dimensions Chopard also fitted this flagship manufacture chronograph with a flyback function that allows you to restart the chronograph without having to stop it.

Unlike the Lunar One discussed above, which has a mainplate and bridges crafted in brass, like most watches, the Perpetual Chrono is made of German nickel silver which gives a distinctive natural patina and is even more luxurious. The movement consists of 452 components, 42 jewels, and has a 60-hour power reserve.

Although the dimensions are relatively large, compared to say a Patek Philippe Perpetual or Perpetual Chronograph, these appear smaller on the wrist than the specs belie. And the Chrono, in particular, is just stunning, from its solid gold blue sunray dial to its column wheel and vertical clutch equipped German silver movement, the latter of which is reminiscent of the Lange Datograph.