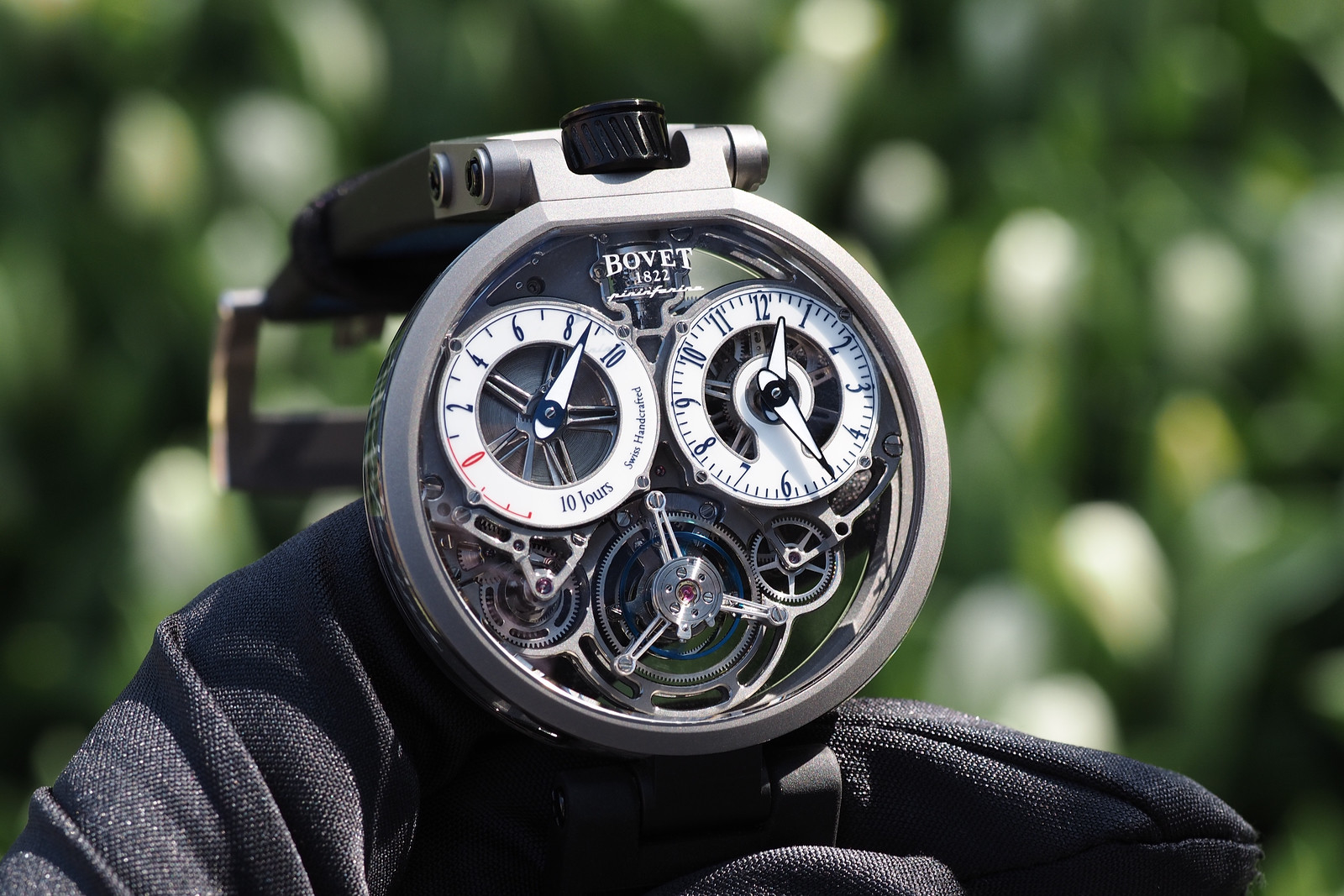 Dating back to 2010, with the launch of the Ottantasei Tourbillon, Bovet partnered with the famous Italian car design firm, Pininfarina S.p.A., to create a collection of timepieces called “Bovet by Pininfarina.” The most recent timepiece to be added to this prestigious line of watches is the Flying Tourbillon Ottantasei. Boasting a flying tourbillon, and sapphire crystals on the front, rear, and left and right case flanks, light pours in from all angles when viewing the timepiece. This, is, of course, exemplified by the completely skeletonized, three dimensional, hand-decorated Swiss manufacture movement.

The dials of the Ottantasei, which are placed symmetrically at 10 and 2 o’clock, indicate the power reserve and hours/minutes, respectively. The chapter rings are thin, with a white lacquer surface, and stamped with blue numerals and graduations. The hands have been blued and feature a luminescent treatment. Each dial is secured to the skeletonized mainplate with four screws. In the center, a circular cut-out reveals the components beneath. In the case of the power reserve display, fittingly, the mainspring is housed in a single barrel just underneath indicator that reads 0-10, and which represents the massive 10-day power reserve (240-hours).

The Bovet Flying Tourbillon Ottantasei is the type of tourbillon that makes you think about super cars, private jets, and luxury villas overlooking the ocean from high up cliffs.

At 6 o’clock is the flying one-minute tourbillon, secured in place by three support bridges on the dial side.
Hand polished silver screws, as well as the white dial, contrast against the dark ruthenium treated bridges and mainplate. “Bovet 1822 Pininfarina” is laser engraved in white at 12 o’clock. The dial is protected by a domed sapphire crystal.

As shown, the case is crafted in grade 5 titanium, which is both light and robust. The case measures 44 mm in diameter and has a thickness of 8.85 mm without the sapphire crystal and 12 mm with (as it is domed and so it adds to the total thickness). The case has a matte finish (although the 18K red gold model is completely polished).

The net weight of the metal for the entire case is 51.66 grams in gold and 15.54 grams in titanium. Articulating lugs make it so the watch sits comfortably on most wrist sizes.

Uniquely, in addition to the front and rear sapphire crystals, there are sapphire windows on the left and ride side of the case as well. Laser-engraved on the inner concave surfaces of these sapphire crystal walls are the words “Pininfarina” and “Limited Edition.”

Most notably, the crown is located at 12 o’clock, which requires a special opening in the strap connected to the top of the case. The black crown has angle ridges cut into its surface (as seen on the all the tourbillons in the collection). The top of the crown is set with sapphire crystal laser-engraved with the emblematic Pininfarina logo above a polished mirror.

Horologically speaking, the Ottantasei Tourbillon movement impresses in that much of the movement plate and bridges have been removed (skeletonized). Maybe even more impressive, is the 240-hour power reserve, all from a single 1.02-meter long mainspring within a single barrel. That is 10-days of autonomy.

Being that is it a hand wound movement – to take advantage of the extended power reserve – you have to, you know, wind it, by hand. That process should typically require many more turns, considering the length of the power reserve. However, thanks to a special spherical differential developed and patented by the Bovet’s manufacture, Dimier 1738, half the turns are required to achieve maximum wind. Furthermore, the extreme miniaturization of this mechanism inspired them to file a second patent for the three-dimensional multiple meshing teeth, which drastically reduce clutter while optimizing the watch’s operation.

Half a day of machining and EDM is needed to create a single mainplate. Afterward, a full day is required to decorate the mainplate and bridges. A mixture of finishes decorates the dark ruthenium treated plate and bridges. From sandblasted (frosted surfaces) to manually applied Côtes de Genève to a distinctive barleycorn motif on the backside, every component is perfectly prepared by a skilled artisan. Moreover, all the edges are hand-chamfered, including both sides of the movement, and its vertical walls.

This is a watch designed in collaboration with Pininfarina, a renowned car design firm, so it seems appropriate that the barrel is skeletonized according to the five-spoke wheel theme, a theme that can be found at several other locations as well: the mainplate, the barrel bridge, the ratchet, and the tourbillon bridge.

To perfect the coherence of the entire collection, the traditional black rubber strap boasts a refined design, a blue Alcantara suede lining, and the collection’s traditional buckle to match the material selected for the case.

The entire production will be limited to 86 timepieces, with a plate bearing the individual number of each movement will be screwed to the back of the bottom lug that secures the strap to the case.

The Bovet Flying Tourbillon Ottantasei is the type of tourbillon that makes you think about supercars, private jets, and luxury villas overlooking the ocean from high up cliffs. It is truly a watch targeted at the ultra-wealthy. And it does stand out, even during our few days with it at the Baselworld fair – the world’s biggest watch show, overflowing with six-figure tourbillons – this watch stood out.

When I was shooting it out in front of the main halls, people came up an asked about it. When I was wearing it on my wrist, people asked, “what is that?” It is undoubtedly a show-stopper. Despite all the attention, though, the matte titanium case is not ostentatious as you might expect from a six-figure tourbillon equipped watch. Although, the red gold model, which has a mirror-polished finish, will surely fit the bill if the matte gray titanium is not blingy enough for you. Afterall, at this price range, you should get exactly what you want.

At the end of my short time with the watch, as with each review watch, I thought to myself: “do I want to give this back?” And the simple answer was NO! Even in a time when tourbillons might be called passe, a select few still make it into production that you would actually want to wear – and this is one of those rare exceptions.