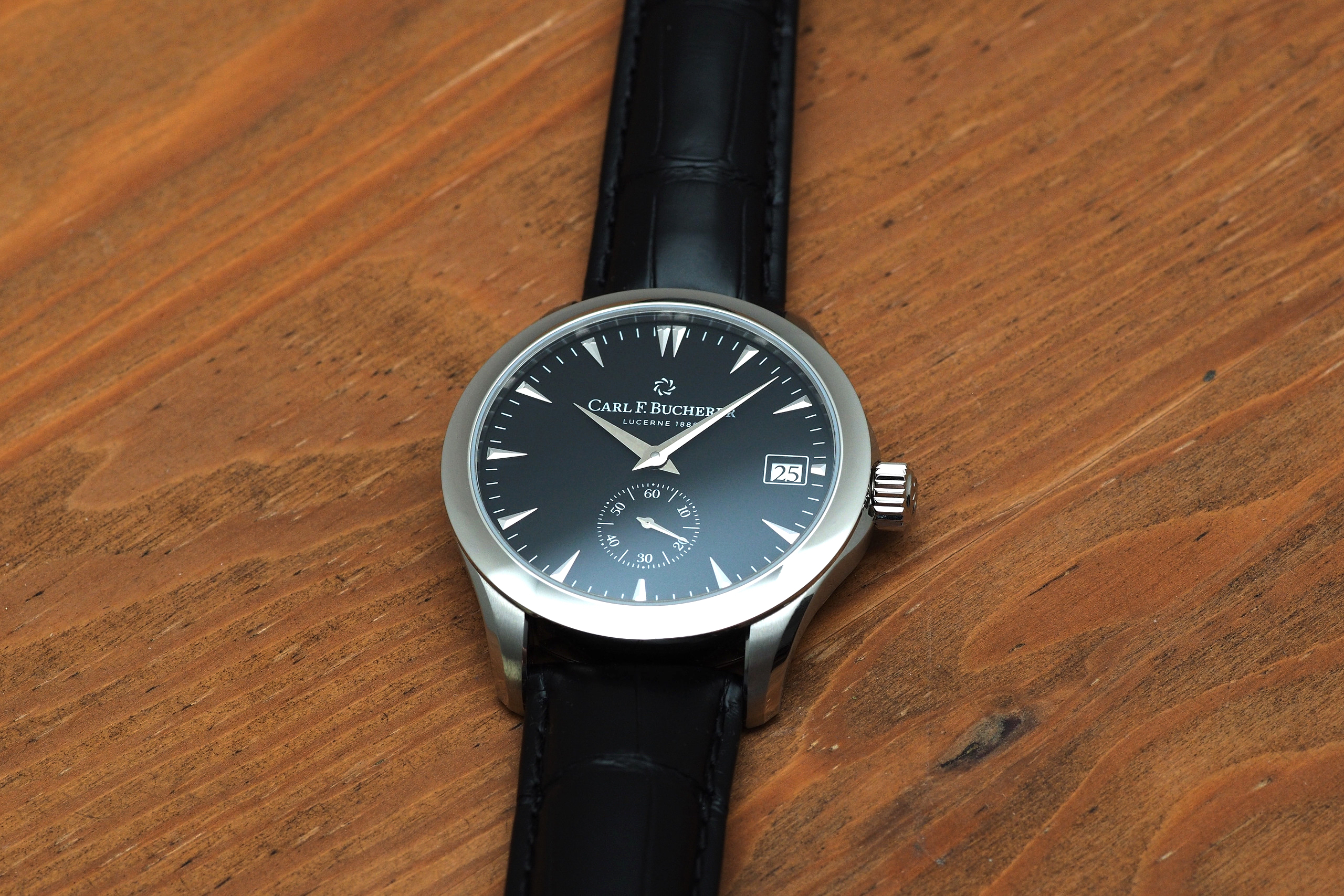 Originally founded by Carl Friedrich Bucherer in 1888, in Lucern, Switzerland, Bucherer started out as a watch retailer and jewelry store, selling a selection of the best brand name timepieces.

In addition to their prominent chain of European retail stores, in 2001, the Bucherer Group created the luxury watch company Carl F. Bucherer, named after the company’s founder.

In 2007, Carl F. Bucherer acquired Téchniques Horlogères Appliquées, giving them the ability to manufacture movements in-house, starting with the original CFB A1000 caliber, that debuted at Baselworld 2009.

The A1000 caliber represented the first reliably functioning peripherally mounted rotor wound movement, which is even more impressive considering a few well-known watch companies tried to produce a reliable peripheral rotor watch movement but were unsuccessful.

With the launch of the new caliber CFB A2000 – which powers the new Manero Peripheral – at Baselworld 2016, the Lucern-based watchmaker has taken their proprietary peripheral rotor movement technology to the next level.

The Manero Peripheral is the first watch to utilize the new A2000 collection of movements, which will find its way into more models in the future, including some that will likely debut at Baselworld 2017 next week.

Like the CFB A1000, the A2000 uses a low-friction ball bearing system with a tungsten rotor that is mounted on the circumference (or peripheral) of the movement and can wind in both directions.

The design requires a distinctive layout in terms of bridges, and a special system for isolating the regulator and balance spring stud carrier from shock, and includes the patented “Dynamic Shock Absorption” (DSA) system for effective shock absorption which was carried over from the A1000.

Nevertheless, there are a number of enhancements to the A2000 caliber. First, it runs at 4Hz (28,800 vph), up from the 3Hz (21,600 vph). Second, the balance system is now free-sprung, offering higher precision. And finally, the A2000 is an officially COSC certified Swiss chronometer.

The decoration of the bridges includes traditional rhodium plating, Geneva stripes, and beveled edges, resulting in an industrial aesthetic that is high-end Swiss. Yet the look is distinctive enough to differentiate the caliber from the somewhat monotonous look seen across the industry.

As a nice finishing touch, the company logo in engraved on top of the mainspring barrel.

The watch I reviewed has a matte black dial with applied, polished, and faceted wedge-shaped indexes. The faceted and polished dauphine-shaped hour and minute hands are centrally mounted. A dauphine-shaped rotates continuously every 60 seconds in the sub-dial at 6 o’clock. A framed aperture at 3 o’clock – which partially obstructs hour marker – displays the date. The outer chapter ring features white printed minute graduations.

Carl F. Bucherer recently redesigned their logo, in an apparent effort to rebrand the company, presumably to attract younger buyers. The logo, which is stamped on the dial at 12 o’clock, features the new look, including “LUCERNE 1888,” which is an homage to the company’s origins in Lucerne, Switzerland that dates back to 1888.

The Manero Peripheral is presented in a round stainless steel case that measures 41 mm x 11.5 mm according to my measurements (although the manufacturer lists the measurements as 40.6 mm x 11.2 mm). Lug-to-lug width is 47 mm (the length of the case including the lugs) and interlug width is 20 mm. Total weight with the included leather strap is 90 grams.

A stainless steel bezel is fixed in place, and features a smooth curve, almost like a stepped bezel. A push-in stainless steel crown that measures 6.5 mm in diameter – and features an embossed Carl F. Bucherer motif that has been fully polished – controls all adjustments including setting the time, with stop seconds, the date, and hand-winding.

Like the CFB A1000, the A2000 uses a low-friction ball-bearing system with a tungsten rotor that is mounted on the circumference (or peripheral) of the movement and can wind in both directions.

Protecting the front of the dial is a cambered sapphire crystal with an anti-glare treatment on both sides. In photographing this model, which as you can see from the marking on the caseback is a “PROTO” which means it is a prototype, it was extremely hard to avoid glare on the crystal, which was the biggest issue I had with the watch. Although, I suspect the prototype may not have had both coatings correctly applied as a final version would have.

The caseback also features a sapphire crystal, offering a view of the impressive automatic winding movement, which as noted above, thanks to its unique peripheral design, can be viewed largely the same way you can view a manually wound movement.

On the wrist, the watch wears well, somewhere in between a dressy and a sports watch, although closer to the dressy side. The size is about right for my wrist (about 7.5″) and it wore very comfortably, even under a shirt sleeve, thanks to the thin case design and short, ergonomically articulated ergonomic lugs.

There are currently six variations in total. Stainless steel and rose gold with either a matte black dial or white porcelain. And the steel versions are also available with a steel bracelet.

The included black alligator leather strap is 20 mm at the lugs and tapers to 18 mm at the buckle. The stainless steel buckle features an engraved logo, filled with black paint, and features a push-button folding clasp.

The Manero Perpetual improves on the amazing peripheral rotor design of the CFB A1000 caliber, ultimately offering a higher frequency, less sensitivity to shock – resulting in higher “chronometer” level accuracy.

Choosing to offer the watch in stainless steel was a smart decision and keeps the watch competitively priced at under eight thousand.

Furthermore, Carl F. Bucherer’s choice to integrate the movement in a 40 mm case was a great choice and is surely just the beginning of what is to come with the new A2000 movement family.