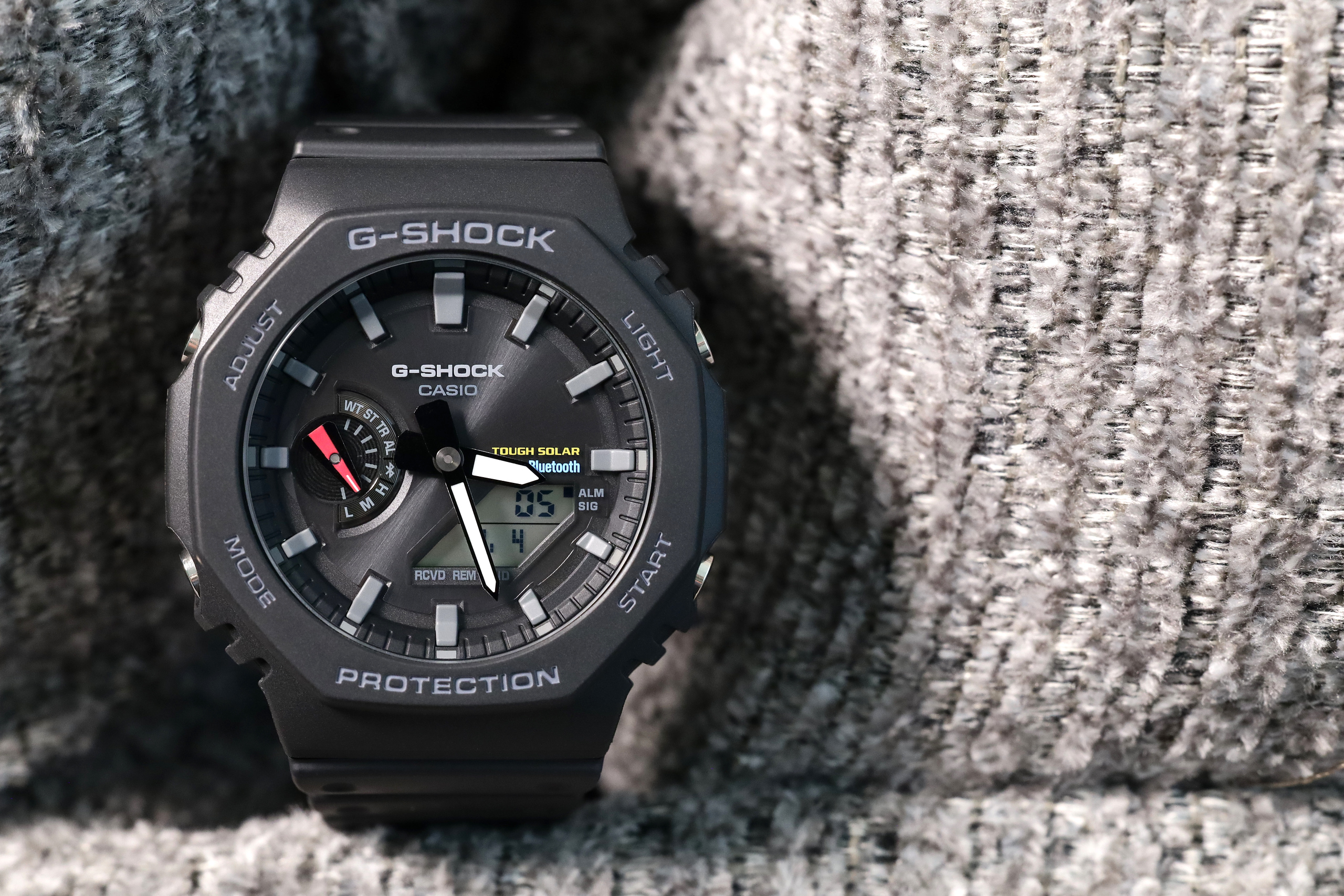 In 2022, G-Shock enhanced its original GA-2100 collection — nicknamed “CasiOak” for its octagonal-shaped bezel — by adding Bluetooth and solar power.

As a natural evolution, however, Casio recently also came out with an all-new full-metal version of the GM-2100 series, called the G-Shock GM-B2100, with Bluetooth and solar power, as well as giving it a more robust metal construction.

The two potential downsides of the newly announced GM-B2100 all-metal CasiOak models are the higher price of $550+ and weight of 165 grams. Thankfully, compared to the $99 resin watch (the original GA-2100 series), the new the resin-carbon cased (GA-B2100 series) has risen to just $150, and while you don’t get a premium metal-covered case, a metal bezel, or a metal bracelet — you do get Bluetooth and solar power, ensuring your watch is always powered and set to exactly the right time, with little to no interaction needed. Just pick it up and you’re ready to go, as long as it sees light from time to time to charge the battery.

On the wrist, the GA-B2100 watch, which uses the same resin strap with steel pin and buckle closure as its predecessor, wears exactly the same as the GA-2100. Of the three most iconic G-Shock collections — the 6900 Series, the 5000 Series, and 2100 Series — this is perhaps the most comfortable.

Moreover, the continued sales popularity of the collection suggests this case style, could be the most desirable look within the entire breadth of the G-Shock brand. Personally, it’s one of my favorite styles, because it’s both very attractive and super comfortable on my wrist.

As far as construction, the watch is primarily made of resin, with some carbon resin used on the inner case to reduce shock (Carbon Core Guard Structure), which is visible only on the backside of the watch. The dial is protected by a mineral crystal, which is not as nice as sapphire crystal, but considering the price, this is to be expected. Besides, the glass is protected by design, because it sits below the plane of the bezel (armored). The caseback is stamped steel and is secured with four screws, versus a screw-in design, which again, is a result of the targeting a low price point. Even with some of the required cost-cutting measures, you still get G-Shock’s impressive 200-meter water-resistance depth rating.

Functionally, the GA-B2100 comes with the usual plethora of features, all while keeping the dial relatively minimalistic, which is preferable for me because too much going on takes away from legibility and usability.

There’s a sophisticated world time function with 38 time zones (38 cities + coordinated universal time), city code display, city name display, daylight saving on/off, auto summer time (DST) switching, home city/world time city swapping. A countdown timer allows you to measure as accurately as one second and countdown as long as 60-minutes. The full auto-calendar is accurate until the year 2099. There’s a hand shift feature (the hands move out of the way to provide an unobstructed view of digital display contents). A stopwatch offers the ability to track elapsed time (including lap/split times) for up to 24 hours, with 1/100th of a second accuracy.

When connected to the Casio Watches app via Bluetooth, the GA-B2100 can perform automatic time adjustments for extremely accurate timekeeping, easy watch setting with access to an expanded number of world time cities (approximately 300), time and place data, reminders, and a phone finder function that helps you find your phone by activating on the watch. Even without Bluetooth connected, regular timekeeping is displayed via the analog hour and minute hands (hand moves every 20 seconds), with an accuracy of ±15 seconds per month (with no mobile link function). When the watch is connected to Bluetooth, it’s as accurate as a mobile phone. The battery level, as well as the modes, are indicated in the subdial located at 9 o’clock. In the digital display on the lower right quadrant of the dial, a digital display reads the hour, minute, second, pm/am, month, date, and day.

Every G-Shock is highly shock resistant, and this is no different. To see in the dark environments, Casio added a generous amount of lume, but only to the hour and minute hands, which somewhat reduces the utility compared to also adding lume to the hour markers. In addition to the lume, there’s also a push-button Double LED illuminator which significantly enhances nighttime legibility (and can be set to illuminate for either 1.5 or 3 seconds), although I found the recessed pushed extremely hard to press due to its size and position.

To conserve power, the watch display automatically goes blank to save power when the watch is left in the dark. The approximate battery operating time is 7 months on a fully recharged battery (with normal use without exposure to light after charge) and 18 months on a fully charged battery (operation period when stored in total darkness with the power save function on after full charge).

Casio listened to their core audience and enhanced the original CasiOak, by giving it Bluetooth and solar, which are called out in bright yellow and blue font on the dial at 3 o’clock. With these additions.

The new dial features a translucent surface, which is required to let the light through to power the battery. With this change, Casio opted to give the dial a new sunburst treatment, which not only adds solar power but also elevates the dial visually over the original CasiOak.

Having Neobrite on the hour and minute hands is great, and this proprietary lume seems to be on par with the brightness of lume seen across the industry, however, it would have been ideal to see that lume also applied to the indices or at least just above the indices on the outer chapter ring. The LED illuminator at least in part, makes up for this omission, although the LED eats battery, only stays on for up to 3 seconds, and requires pushing a button that’s not quite as easy to activate as the push-buttons found on models like the 6900 series, which places a large button just under the dial at 6 o’clock.

For those who want a CasiOak, and are adamant about having Casio’s desirable Bluetooth and Tough Solar technology, this should be of interest. And for those wanting the same tech, but housed in a metal-covered CasiOak, that’s also now an option, albeit, at a higher price point. You won’t find any other watch with the durability and tech found in the GA-B2100, for anywhere close to the price of this watch — making this a bargain.