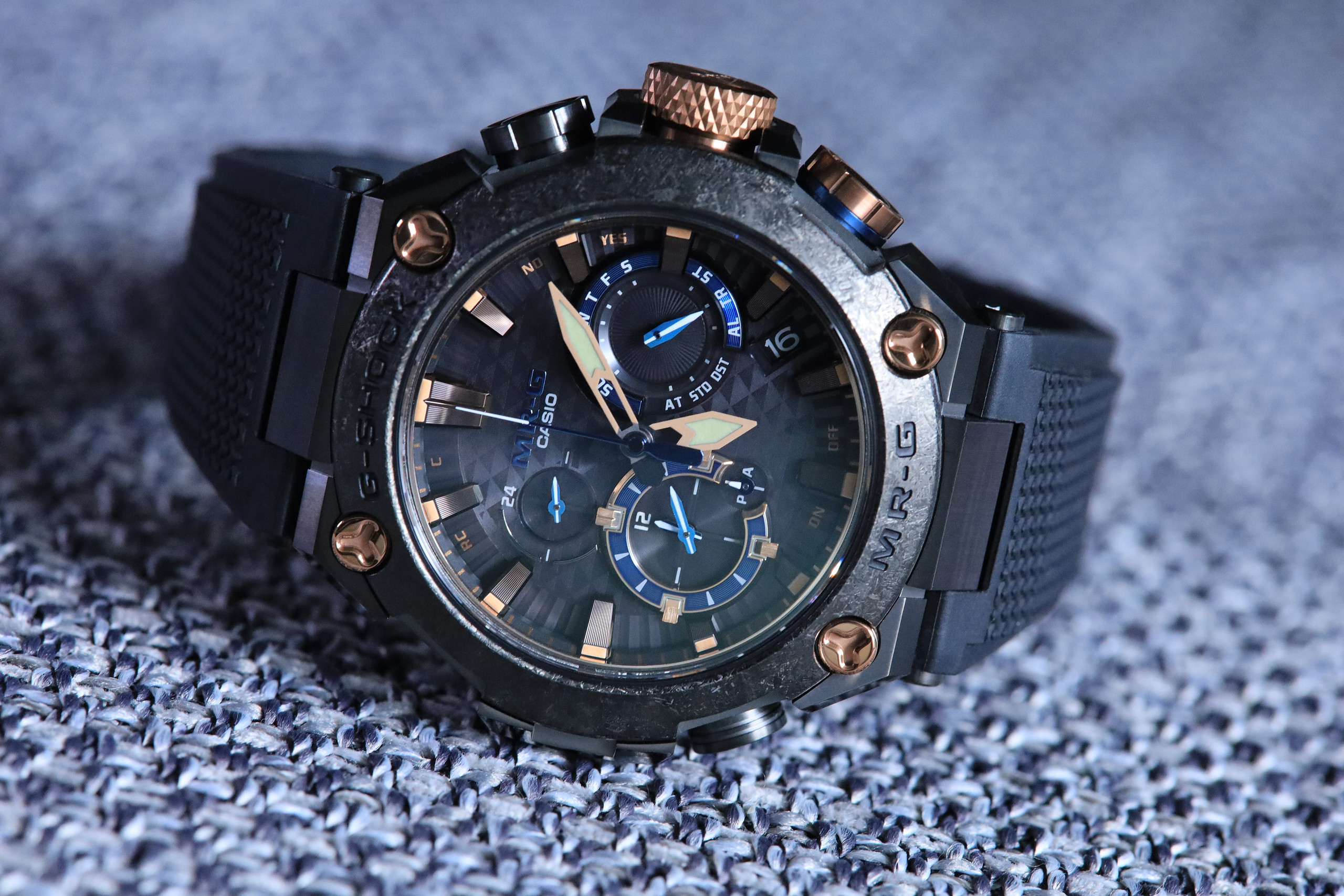 MR-G is the name of G-Shock’s high-end counterpart that’s manufactured on the company’s premium production line in Yamagata, Japan.

Casio Computer Co., Ltd. was founded in 1946 by fabrication engineer Tadao Kashio and is headquartered in Tokyo, Japan. Casio first made a name for themselves producing electronic calculators and it was not until 1974 that they released their first wristwatch. At the time, quartz watch popularity had been was rising following the introduction of the first quartz wristwatch in 1969. In the late 1970s, Casio pioneered the democratization of quartz technology on the wrist as one of the first companies to mass-produce digital quartz watches — making them available to a broader audience of consumers.

Less than a decade after debuting its first watches, in 1981, Casio engineer Kikuo Ibe famously dropped (and. broke) the pocket watch given him to by his father thus sparking the idea for an unbreakable wristwatch, dubbed “G-Shock.” The G-Shock was conceived as a watch that had to meet three criteria referred to as the “triple 10” resistance, meaning it would have a battery life of 10 years, have a water resistance of 10 bar (100 meters), and could survive a fall of 10 meters (32.8 feet).

By 1983 the first G-Shock, the DW-5000C, the iconic square-shaped watch you still see to this day, was launched. Over the years, the success of G-Shock — amongst a diverse group of consumers including, skateboarders, surfers, musicians, and celebrities — created a cult-like following within the brand that transcended the reach of traditional watch brands and made G-Shock a household name.

Newness is a key to most consumer product businesses and as G-Shock’s popularity rose increasingly so did their desire to continuously offer newness. Eventually, after offering resin (plastic) based watches, G-Shock introduced higher-priced metal-based timepieces alongside their lower-priced predecessors, built with more commonly used watchmaking materials such as stainless steel, titanium, and carbon fiber.

This progressive increase in quality eventually led to the introduction of the first MR-G in 1996, the MRG-100. Today, MR-G represents the highest quality within the G-Shock universe, and also the highest price point, and the rarest timepieces made by Casio — the MR-G collection was previously JDM (Japanese Domestic Market) — but are now available in the US in very limited quantities.

The MR-G ‘Kachi-Iro” MRG2000R-1A is the latest to receive Casio’s coveted MR-G badge, which is emblazoned on the dial and engraved prominently on the bezel at 6 o’clock. If you look closely, you’ll see the material is different than the rest of the watch, and that’s because it uses an alloy structure called recrystallized titanium that has an appearance that could easily be mistaken for forged carbon, however, titanium is far stronger than carbon and nearly as lightweight. Not to mention, this is likely the first time recrystallized titanium has been used in watchmaking — which adds to the allure.

Flanking the bezel are four decorative bolts that have been plated in 18K polished rose gold to contrast the dominantly matte black color scheme as well as matching the hands, indices, crown, and the ring around the pusher on the lower right position of the case. The bolts are not just decorative and do in fact screw down to the titanium case middle to hold the bezel in place.

The case is deep layered hardened lightweight black titanium the has been heat-treated to make the metal harder and more scratch-resistant. Once milled the titanium case and clasp, which has been laser engraved with “MR-G” (or bracelet) are heated in a mixture of oxygen and nitrogen gas and used to create a 20~30μm hard layer on the material’s outer surface. Unlike a film, it makes the actual material itself harder than pure titanium. Then a coating with a hard amorphous carbon film, composed of carbon and hydrogen, undergoes a DLC treatment, to give the watch a black finish — and to further protect the case, bracelet links (for MRGB2000B-1A which comes with a titanium bracelet, yellow gold accents, and does not feature the recrystallized titanium bezel), and buckle.

GPS is notably absent from this latest generation of MR-G timepiece, and that’s because the combination of Bluetooth time sync as the primary way to calibrate the time automatically and with the Multi-Band 6 atomic radio time sync system working as an automatic backup should the Bluetooth signal not be received, is more than sufficient to keep the watch running with near-perfect precision. You can also manually set the watch but it will most likely never be an issue anywhere there’s cellular reception.

Protected behind a flat-sapphire crystal that’s set just below the plane of the bezel (armored) is the dial with a dark gray triangular repeating pattern (Japanese scale pattern) that aesthetically appears to be carbon fiber but like on all solar G-Shocks this is not carbon and is actually where the sunlight enters the dial to recharge the watch battery. Surrounding the outer edge of the dial are oversized indices that Casio says have gentle concave surfaces that resemble the curve of a samurai sword. The sophisticated battery-powered quartz module is accessible through the solid titanium caseback — that’s embossed with the MR-G emblem — which is secured to the case by four screws.

Mounted in the central hand stack are three analog hands that display hours, minutes, and seconds. The large skeletonized sword-shaped hour and minute hands are made of steel and have been coated with a rose-gold plating and treated with lume. On the very top of the center pinion is a baton-shaped seconds hand that’s been painted with a reflective shiny blue painted, with a large counterweight. The same metallic blue is used for the MR-G logo at 12 o’clock as well as surrounding the two of the three subdials, and for the subdial hands.

Thanks in part to the use of lightweight titanium, and a rubber strap as opposed to a metal bracelet — the total weight of the watch is just 138.2 grams. Most importantly, it never felt heavy or cumbersome on my wrist. The weight and case ergonomics play a part in the comfort, and so does the super-soft fluorine rubber material they chose for the strap. A premium matte black titanium folding clasp was used here, so you have to cut the rubber to fit it to your wrist properly, but once fitted it goes on and off even easier than a pin buckle. Interestingly, the strap is imprinted with a distinctive Bishamon tortoiseshell finish of Bishamonten armor, a symbol of strength in Japan since ancient times. Connected to the case via four bolts that allow a significant amount of movement and articulation, strap comfort is significantly enhanced by this design, however, the one downside is that it’s unclear how these bolts are removed/unscrewed (it may require a special tool). In this instance, you can attach a steel bracelet, but that’s the only other option we’re aware of. At this price point, I’d like to see a quick release system implemented, and more strap options and this generally can be said about a large majority of watches on the market. Although that’s clearly changing as more and more watchmakers are adding quick strap change systems. At least you can be sure this strap is not likely to fall off at a critical time.

What makes this watch relatively wearable, despite its diameter of 44.6 mm, is that it’s only 47 mm lug-to-lug, which allows it to fit well on many wrist sizes, including mine at 7″ around. That said, it’s not going to slide under a dress shirt cuff very easily at 16.9 mm tall, and with the slimmest G-Shock announced last month at just 12.9 mm in thickness, we know there’s a module that can fit within a thinner case. However, this watch is made for those looking for wrist presence, and not someone expecting to wear the watch in a formal atmosphere like the boardroom. Although, wearing this with casual attire would surely make a statement in the boardroom.

This is the top of the line within the vast G-Shock catalog, and with every detail — especially the fit and finish — it shows.