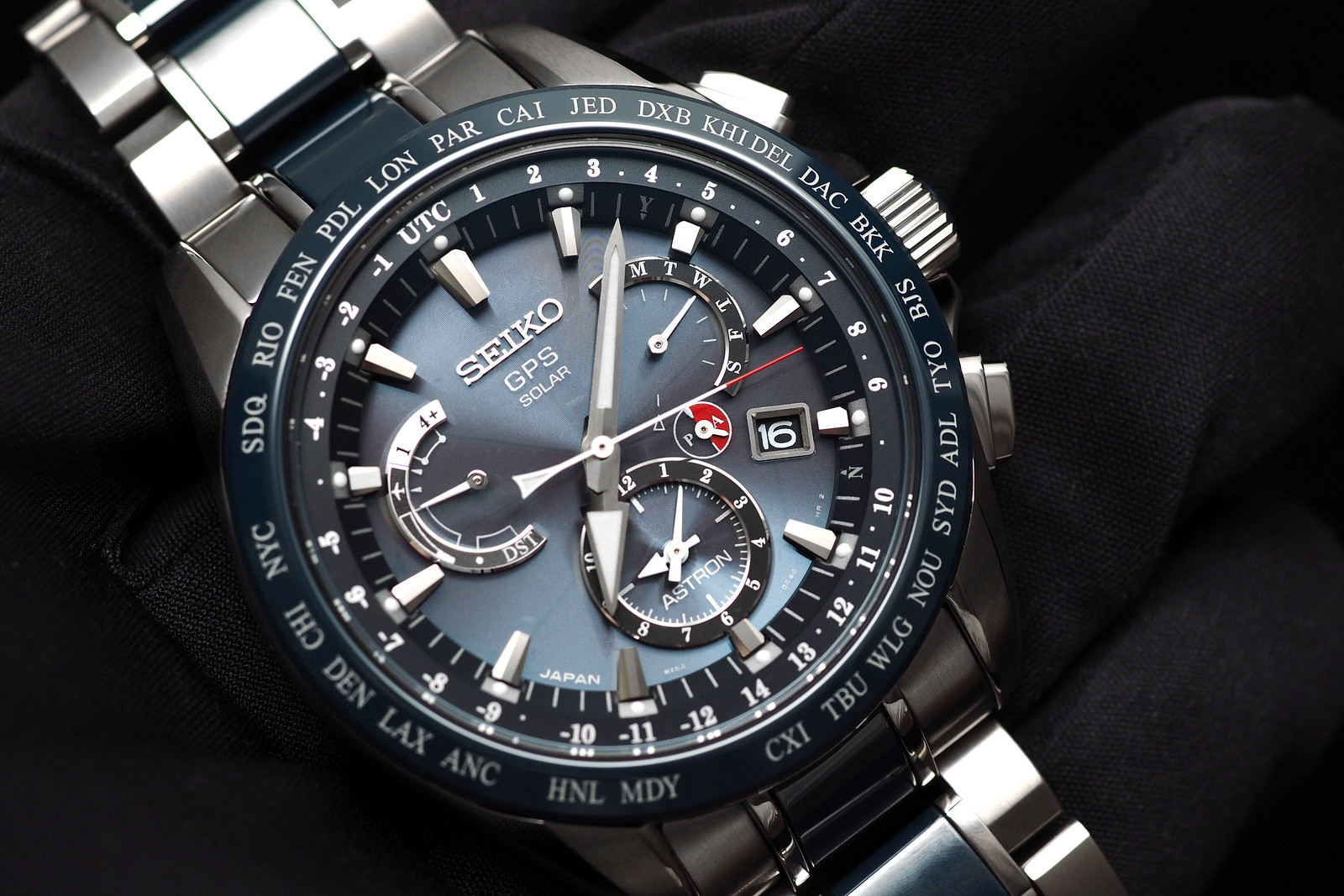 Seiko’s GPS calibrated Astron collection was first launched in 2012, with the caliber 7X. Then in 2014 the second-generation, caliber 8X, which added a chronograph, was introduced. In 2015, the Astron line gained a third movement, caliber 8X53, which powers the new Astron Dual-Time timepiece we tested for this article.

The Astron GPS Solar Dual-Time is designed for the frequent traveler, who constantly changes timezones, and doesn’t want the fuss of always having to manually reset their timepiece. The Dual-Time watch features atomic timekeeping precision, without the reliance on radio signals from one of the 6 international atomic clocks (which have a limited range of 2000 miles), and that fades the further you are from the radio tower. With the Astron, instead of radio waves, the atomic time is communicated via military-level GPS (Global Positioning Satellite) signals, just like on a satellite-phone which connects directly to orbiting satellites instead of terrestrial cell sites. Unlike radio-signal calibrated atomic watches, Seiko’s Astron timepieces can receive a calibration signal anywhere in the world.

The Dial and Movement

Instead of a winding mechanism or standard battery, the Astron movement is powered by solar power. Light enters through Seiko’s proprietary dial, charging the watch’s internal power cell, automatically.

Interestingly, when I received this timepiece to review, I took the watch out of the box and the first thing it did, with no input from me, was moved the hands to the correct time, with the same exact time as my computer and cell phone. Even the date set automatically.

Adjusting to a new local timezone requires a simple touch of a button (40 World Time Zones are covered, including half-hour zones). And you can read the home time (a 2nd-time zone) from the 12-hour subdial at 6 o’clock. The second time zone also includes an adjacent AM/PM indication, that shows if it is day or night at your (2nd location/home time).

With GPS controlled time, the watch will run as accurate as an atomic clock. Even without receiving a signal, it should maintain accuracy of +/- 15 seconds per month, assuming it is within a temperature range between 5°C and 35°C.
Additional functions include a signal reception result indication, power save function, Daylight Saving Time (DST) function, all displayed in the subdial at 9 o’clock.

The day of the week is displayed in a retrograde display at 2 o’clock, and the date via an angled aperture at 4 o’clock. The movement features a perpetual calendar function and will be correct until February 28, 2100.

The dial has a three-dimensional look, with large facetted steel polished hour and minute hands, prominent applied indices, a highly sloped minutes chapter ring – everything just pops out at you. This, coupled with the luminous hands and hour dots, makes the dial incredibly easy to read in any lighting condition.

The Astron case is crafted out of titanium, with a super-hard scratch-resistant coating on it (a nice touch as titanium is typically easier to scratch than steel, even though it is harder). The diameter of the case is 45 mm, with a thickness of 13.3 mm and a length of 53.5 mm. I characterize this as a large watch, but I did not find it cumbersome or uncomfortable. That is in large part because it is relatively lightweight at 117.0 grams, thanks to the use of titanium and ceramic.

The bezel is made from one-piece of ceramic, which is far more durable than steel or aluminum. The blue surface is polished on the top with a beveled outer edge that is matte finished. A great touch, showing off Seiko’s expertise in finishing.
Engraved in white on the fixed bezel are the city codes which coincide with the UTC/GMT times on the outer flange of the dial.

Each case is polished by hand in Japan, using Seiko’s unique Zaratsu technique, which is distortion-free, and according to Seiko displays “sharpness in every light reflection.” I can attest to this high-level of case finishing, with light playing off the case and enhancing the different surface textures. (Take a look at some of the images in “Fullscreen” mode, and I think you will see what I am talking about.)
The crown is electronic and allows manual control of the time setting, as well as the resetting of the Perpetual Calendar. The crown measures 7 mm in diameter, and although it appears to have a ceramic insert the matches the blue ceramic bezel and links, it is not made of ceramic. It would have been nice to see consistently, but this is a minor detail.

The dial is protected by a sapphire crystal with an anti-glare coating. Water-resistance is rated to 100 meters. Magnetic resistance is 4,800 A/m.

The titanium bracelet features a super-hard coating and blue ceramic center links. It is secured to the wrist with a three-fold clasp and push-button release (measures 22 mm between the lugs, 18 mm at the clasp). According to Seiko, the bracelet is composed of individually designed links that are tapered perfectly to the wrist for maximum comfort. The retail price is $2,200. (Ref. SSE0043)

The Astron GPS Solar Dual-Time (Ref. SSE0043) is offered in a collection of eight variations. There are five models in titanium cases and three in steel. There is also one special edition with a ceramic and titanium case.

Seiko is a fully-integrated watchmaker with capabilities that allow them to offer significant-quality at prices other companies could never achieve. Being able to take the watch out of the box, and have it auto set, with absolutely no effort, and without having to sacrifice the aesthetic of a traditional watch, is an important selling point against smartwatches and traditional quartz timepieces alike.

Yes, the price is relatively high when you think about what you could buy in the same price range. Although, nothing else on the market currently offers this level of accuracy – virtually anywhere on the planet. And now with the added ability to track a second-time zone. Moreover, the finishing of the case and bracelet is absolutely impeccable.