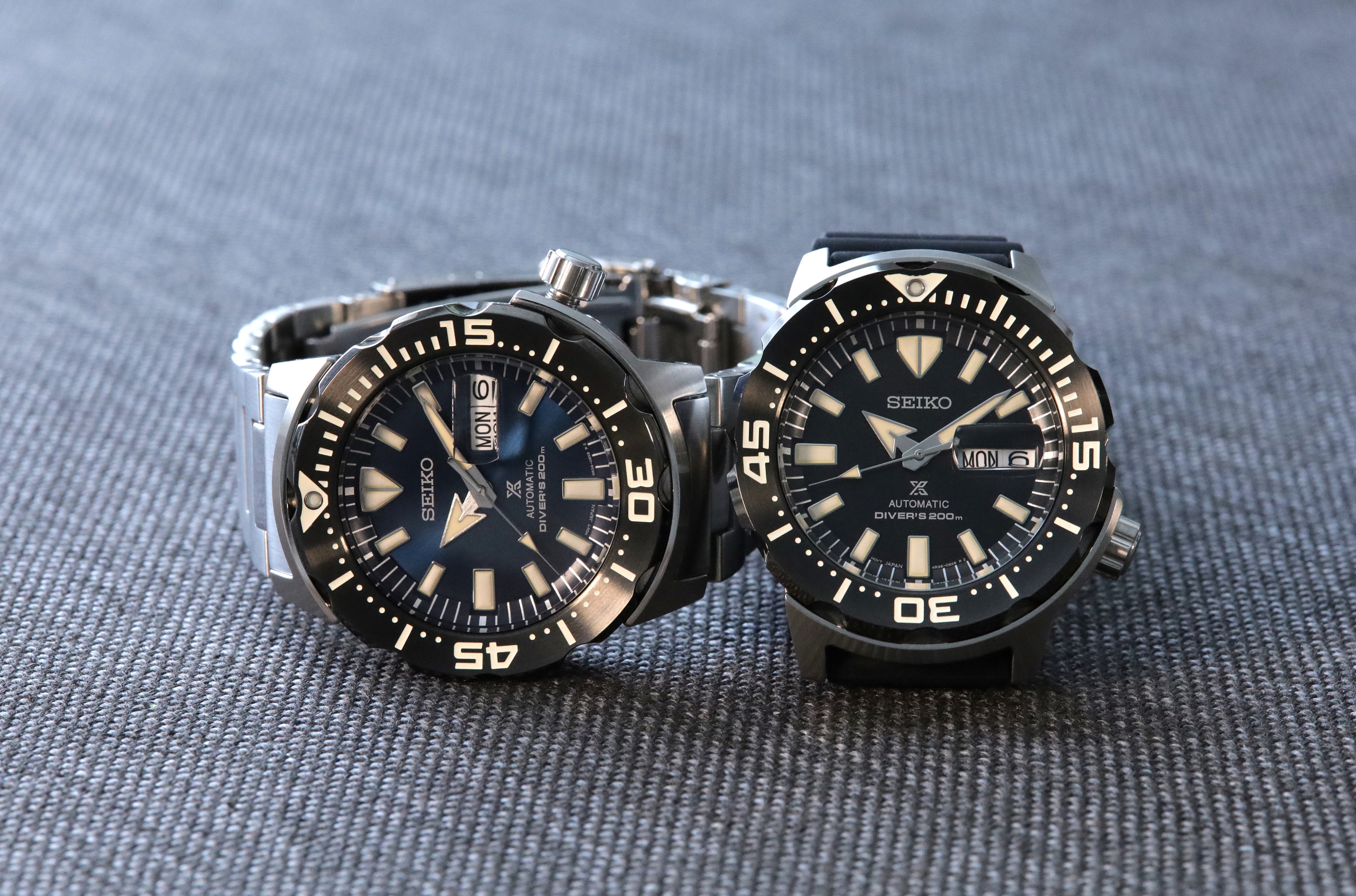 Seiko is the oldest Japanese watchmaker, dating back to 1881. They not only brought the first quartz wristwatch to market but also the first automatic chronograph. It’s Seiko’s dive watches though, that’s one of their greatest areas of strength.

Seiko created the first Japanese diver’s watch in 1965, the world’s first computerized diver’s watch “Scubamaster” cal. M726 with dive table and depth meter functions in 1991, and went on to create many more over the years. From the 62MAS to the SKX007 to the Tuna to the Turtle to the Monster to PADI special editions — it’s safe to say that Seiko is legendary in the field of diving. Their reputation for making diver’s watches is practically unsurpassed — with few exceptions.

The latest (fourth-generation) Monster line, consisting of the Seiko Prospex SRPD25 and SRPD27 Automatic Divers, is slightly smaller, has better ergonomics, and a more sophisticated look overall than previous generations.

One of the most notable new design elements is the new one-piece (monoblock) stainless steel bezel. From the smoother notches to the concave circular matte brushed finish to the black PVD top to the polished black PVD edges — everything about the new bezel is more refined.

This enhanced design language also carries over to the crown which like the third generation Monsters, forgoes its earlier predecessors’ knurled surface in favor of a more traditional ridged crown which sacrifices some grip for an improved appearance.

The stainless steel case and bezel measure 42 mm in diameter by 14 mm thick with the height of the day/date cyclops included (12 mm without). It does make you wonder if the cyclops is even needed, and perhaps for some purists whether the day/date is needed at all. Lug to lug the case measures 47.5 mm, which is a good length, and by comparison, is the same length as the Turtle. However, the Turtle is 44.5 mm in diameter so this creates a thinner watch, which admittedly looked weird at first but ultimately after some more time with it I found the aesthetic to be quite attractive.

With the steel bracelet, reference SRPD25 weighs 186.9 grams, and the rubber strap version, reference SRPD27, weighs 117.37 grams. The interlug width is 19 mm on both. The bracelet feels robustly built and is comfortable and the rubber strap feels even more comfortable with its soft material. The bracelet has push-pin secured links, 4 micro-adjustments on the clasp, and a 2-button safety clasp. Pierced lugs offer a more convenient way to switch the strap or bracelet compared to solid lugs. Although while switching the stainless steel bracelet you have to be careful as the integrated curved end links make changing the bracelet more difficult. There’s a special tweezer type spring bar tool which’s preferable for this type of bracelet, or it’s perhaps best to have it swapped by a watchmaker. Swapping the rubber bracelet is noticeably easier to do with the pin end of a standard spring bar tool.

This is a real “diver’s” watch that meets ISO 6425 standards and can be used for scuba diving. The 7 mm crown is a good size for adjustments yet its location at 4 o’clock prevents any digging into your wrist. The crown is screwed-down to the case and protected from water by two gaskets. There are no traditional crown guards per se but there are two pieces of metal that act as guards for the bezel that are often referred to as the shroud. The lower piece is flush with the case and comes up enough to protect the crown (Seiko Tunas have a full 360-degree wrap-around shroud).

A solid steel screwed caseback is protected from water by a gasket. The dial is protected by a thick flat Hardlex mineral crystal which is also sealed by a gasket and rises just above the plane of the bezel. With 120-clicks, the uni-directional monoblock stainless steel dive bezel features an elapsed time count-up bezel for diving and rotates precisely in one direction with two clicks per mark. There is a millimeter or so of wiggle in the bezel which is not unusual and we’ve seen far more wiggle in timepieces costing four times the price. The feel of the bezel rotation is quite good.

Being a 200-meter “diver’s” watch that meets all the ISO 6425 dive watch requirements this watch is highly robust, shock resistance, and can withstand water pressure to at least 656 feet. It’s twice the standard depth required by ISO but typically what’s preferred for a professional scuba watch.

Seiko’s workhorse in-house caliber 4R36 movement drives the hours, minutes, seconds, and date, and is the same as found in Tunas, Turtles, and Seiko 5s. While it’s not from the latest 6R line, and the power reserve and accuracy are not as high, it keeps the cost very reasonable.

The movement measures 27.4 mm x 5.32 mm, beats at 3Hz (or 21,600 vibrations per hour), features 24 jewels, a 41-hour power reserve, and is equipped with an automatic winding rotor with the ability to be manually wound as well, which is nice considering not all watches at this price point offer automatics with hand-winding. Seiko caliber 4R36 was first released in 2011 and offers “hacking” (the ability to stop the balance wheel by pulling out the crown to precisely set the seconds hand). It also offers a quickset day/date with a dedicated position on the crown and turning one way for the day and the other way for the date. There’s even blue and red for Saturday and Sunday, and a choice of English or Spanish. The date changes gradually (slowly creeping up before midnight) as opposed to changing over in a few minutes (semi-instantaneous) or a few seconds (instantaneous).

One of the biggest differences performance-wise between this movement and a Swiss movement is the accuracy rate, which has to do with cost and the fact that these are presumably not highly adjusted coming out of the factory. The rate is stated to be -35/+45 seconds per day, compared to a chronometer which is -4/+6. With that said, this movement may lose more time and gain more time, but ultimately it’s accurate enough that you’re never off by more than 2-5 minutes, in our experience. For diving, you’re not going to see much difference at all between this and a chronometer if you’re timing a 60-minute scuba dive.

Like with the case, the dial has been given a more premium aesthetic that’s comparable to the third generation Monster but with larger indices, and new sunray dials, including the blue gradient version. A longtime signature of Monster dive watches has been shark tooth hour markers, which have been replaced with more traditional rectangular markers, which first happened with the third generation Monsters. The 12 o’clock marker is thankfully still reminiscent of the earlier generations with shark teeth.

The dial comes in a blue or black sunray finish, the former of which has a slight gradient which means it fades from light to dark. In this instance, it’s darker in the center and lighter on the perimeter. Both are good looking, while the black looks pretty consistent in most light, the blue tends to vary in different lighting conditions, which is presumably the draw of the gradient finishing.

The hands are treated with a generous amount of lume for easy visibility even underwater in dark or murky conditions. Compared to past models this modern version features vertically brushed steel hands for a bit more upscale look as opposed to a two-tone painted and blued. Apart from a minor reshaping, the hands are otherwise very similar to those seen on past models.

There’s a long arrow-tipped center seconds hand, a huge arrow-tipped hour hand, which is a bit short and could perhaps be lengthened to enhance the readability of the time without sacrificing the coherence of the total design. For the minute hand, like the center seconds hand, it goes all the way to the beginning edge of the flange, which is a perfect length, making reading the minutes and second flawless when coupled with the new large, applied rectangular, luminous hour markers, including the shark tooth style double marker at 12.

While purists would likely want a dial free of day/date and magnifier, the feature is beneficial to some. Overall, the new dial carries over the old lineage but with an evolved modern appearance. With regards to the lume, it’s incredibly bright and has been consistently applied all over the generously sized markers, hands, and the bezel dot, as you’d expect from any Seiko diver. This is important not just for looks or merely for seeing in dark environments — it needs to be highly visible underwater to meet the stringent ISO 6425 “Diver’s” watch specifications.

Within the hierarchy of Seiko watches there are the Prospex Luxe diver’s watches which are rock solid and feature premium finishes, with retail prices around $1,000. Then there are the new Seiko 5s which are durable and water-resistant but not for scuba diving nor are they marked as “diver’s” because they lack certain features and are not tested to ISO 6425 standards, starting at $295. Right in between these two is the highly capable Monster line, which is $495 on a strap and $525 on a bracelet.

For only $30 more than the rubber model (Ref. SRPD27), the bracelet model (Ref. SRPD25) with blue gradient dial seems like a no-brainer. The bracelet is well made, has four micro-adjustments (that require a tool to adjust), and a robust signed fold-over clasp with a push-button safety release, although there’s no diver extension.

As for the rubber strap version, the $30 savings is not that much, however, the rubber strap is lighter by a significant amount, is super soft which makes it incredibly comfortable, and it’s stretchy so it can be worn over a wetsuit. Plus, the steel buckle and keeper are both engraved Seiko logos, with machine beveled and polished edges on the brushed keeper. Moreover, you cannot go wrong with a black dial, black bezel, and a black strap — there’s something about that classic look.

Ultimately, the iridescence of the blue gradient dial, which varies between black and blue depending on the light, won me over, and the bracelet looks incredibly sharp with that combo. Nevertheless, I absolutely love the comfort, functionality, aesthetic, and reliability of the rubber accordion strap so I’d probably opt for the blue dial version and add a factory rubber strap separately.

Whether you like the blue or the black dial or prefer the rubber strap or steel bracelet — for five hundred bucks or less, there are few mechanical diver’s watches that can compete with this apart from other Seikos. With this latest generation, Seiko has clearly refined the cult-favorite Monster’s entire design — both visually and functionally — without significantly raising the price.