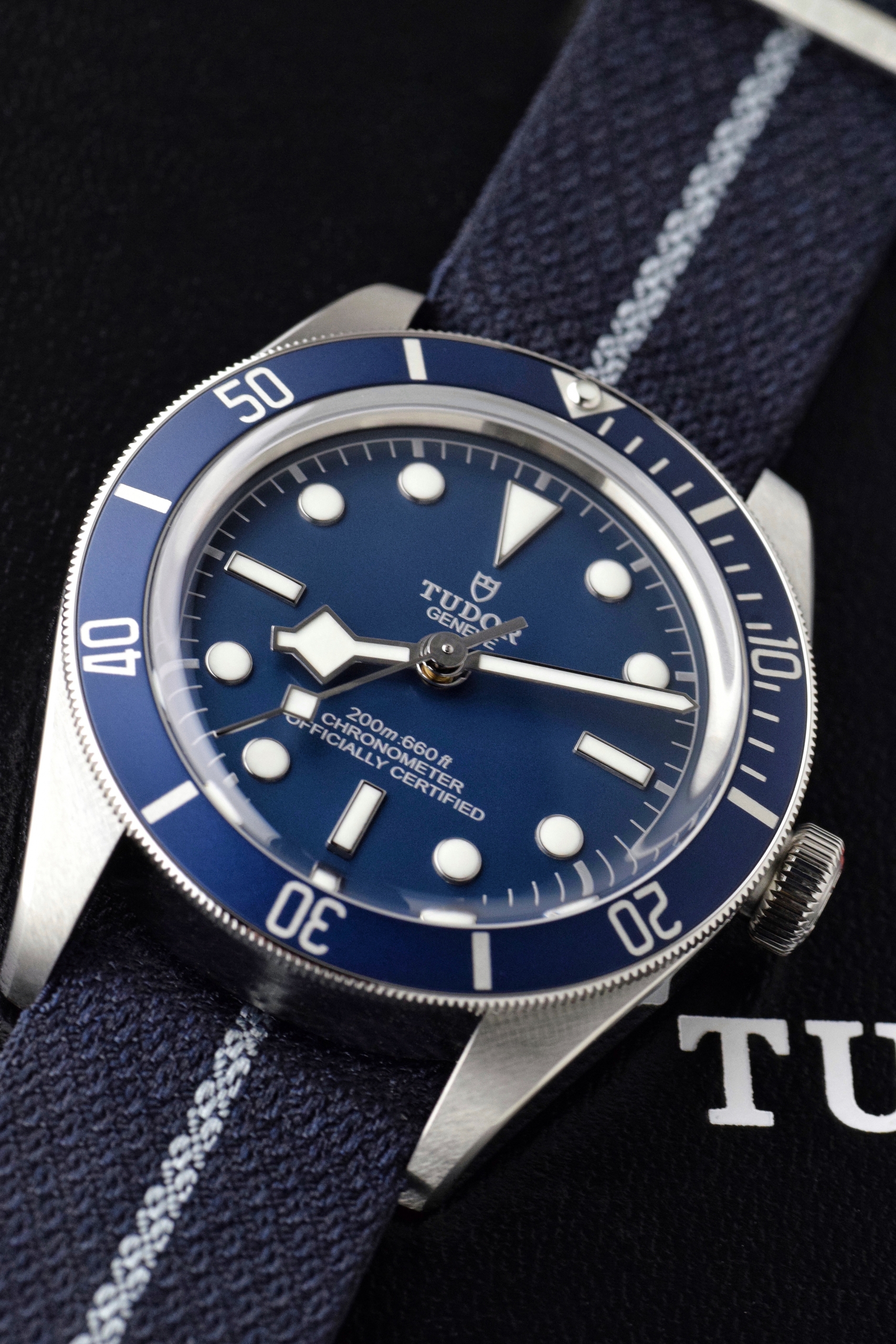 In 1958 Tudor introduced their first divers’ watch, water-resistant to 200 meters/660 feet. It was reference 7924 also known as the “Big Crown.” This is where the modern Black Bay Fifty-Eight (BB58) derives its name.

The Black Bay Fifty-Eight line as a whole pays homage to the brand’s first divers’ watches. However, in 1969, Tudor introduced a divers’ watch with a blue dial and bezel. Other sports watches in their collection soon followed suit, immediately creating a lasting aesthetic hallmark known as “Tudor Blue”. Adopted by the French Navy during the 1970s, the Black Bay Fifty-Eight “Navy Blue” follows in this tradition with its navy blue dial and aluminum bezel insert.

Already seeing much success with the original Black Bay Fifty-Eight in 2018 — largely due to its faithfulness to vintage Tudor and Rolex Submariners — the latest blue version is poised to sell similarly well considering it builds on existing BB58 demand and ties in the historically significant Marine Nationale shade of blue.

This is the watch in for review, the Tudor Black Bay Fifty-Eight Navy Blue Ref. 79030B-0003 with a manufacture caliber MT5402. The caliber MT5402 is certified as a chronometer by the Swiss Official Chronometer Testing Institute (COSC) and is a 4Hz automatic movement with a bidirectional rotor system (that winds in both directions), and has a power reserve of approximately 70 hours. The movement has a thickness of only 4.99 mm, the main reason for how slender the watch is.

The screw-down winding crown displays the Tudor rose and like its predecessor is water-resistant to the same 200 m/660 ft. The bezel is steel and is rotatable unidirectionally with a 60-minute graduated insert in matte blue anodized aluminum with silver gilded markings and numerals. A domed sapphire crystal protects the dial. Applied hour markers and Tudor’s signature “Snowflake” hands complete the neo-vintage aesthetic. As was its 1950’s counterpart, the modern model offers a stainless steel case 39 mm in diameter — keeping the characteristic proportions of its predecessor (more on that later).

The BB58B was shipped for review paired with Tudor’s blue and white striped fabric strap. Interestingly, the strap looks like a Nato-style strap but is actually engineered to have spring bars pass through it so it sits as a quasi single pass strap. This allows it to have a Nato look but a standard buckle and tail finish, having no extra length of strap to fold over as you would find on a traditional Nato-style watch strap. The material has a tactile feel and in this configuration, the watch weighed in at 76 grams and with a retail price of $3,375 as shown.

I decided to give the navy blue BB58 a true test of wearability and authenticity to a watch whose DNA it’s emulating: my 1992 Tudor Submariner Ref. 79090. As a side note and a topic for a whole other article, I refer to watches over 25 years old as “vintage.” For insurance and registration purposes, the age of a classic car in most cases must be at least 20 years and when I polled the Instagram #watchfam a few years back, 25-30 years old to be considered vintage was the overwhelming consensus, so, therefore, I’m considering the 79090 as “vintage.”

Dimensions between the modern Black Bay 58 Ref. 79030B and the vintage Submariner Ref. 79090 are strikingly exact. In fact, the only measurable differences lie in that the vintage submariner has crown guards where the BB58 does not and in case thickness. Before all the purists and anti-reissue collectors groan over these subtle differences, they are both misleading. In measuring the case diameter of the vintage Tudor minus the crown guards and crown you’ll find it’s the exact same 39 mm as the BB58.

The other difference, as mentioned, is in case thickness. If you’re a watch nerd like me (and if you’re reading this, there’s a pretty good chance) one would naturally think this means the modern BB58 is going to be the thicker of the two. However, we must dissect further. The 79090 without the crystal measures 10 mm versus the BB58 at 11 mm. Deceiving once again because the thicker top hat acrylic crystal of the vintage sub makes the thickness dimension the same 13 mm as the modern BB58 with its 1 mm thinner sapphire crystal. All other measurements are precisely in line with each other. Both have a lug to lug distance of 47.5 mm, a 39 mm case diameter without crown, and the same 43 mm with the crown. They also both use the watch collectors sigh of relief, 20 mm lug width.

I wore both watches on and off for the good part of a week to get a feel for the differences. I enjoyed the way the BB58 wore on my sub-7-inch wrist size and it had a nice wrist presence. The shorter lug-to-lug size in my mind is what will always make or break how a watch wears for me and the BB58 is in my sweet spot, just like the vintage Sub. I liked the look of the Black Bay on the fabric strap supplied but it felt slightly top-heavy in my opinion. My preference would be to wear it with either the bracelet or a leather/rubber strap and this would not be an issue. At times I perceived the modern Tudor as wearing thicker than the Tudor Sub even though the numbers suggest otherwise. That being said, I do think the Black Bay Fifty-Eight Navy Blue will be enjoyed by slim wrists and vintage enthusiasts alike. Take it from this slim wristed vintage watch enthusiast 🤓.

The retail price with the blue fabric strap (pictured) or the blue soft-touch strap, is $3,375 and $3,700 with a stainless steel bracelet.

Case Thickness: 12 mm (13 mm with the Nato strap that runs under the case and add to its thickness)

You may also be interested in our in-depth review of the original Tudor Black Bay Fifty-Eight.