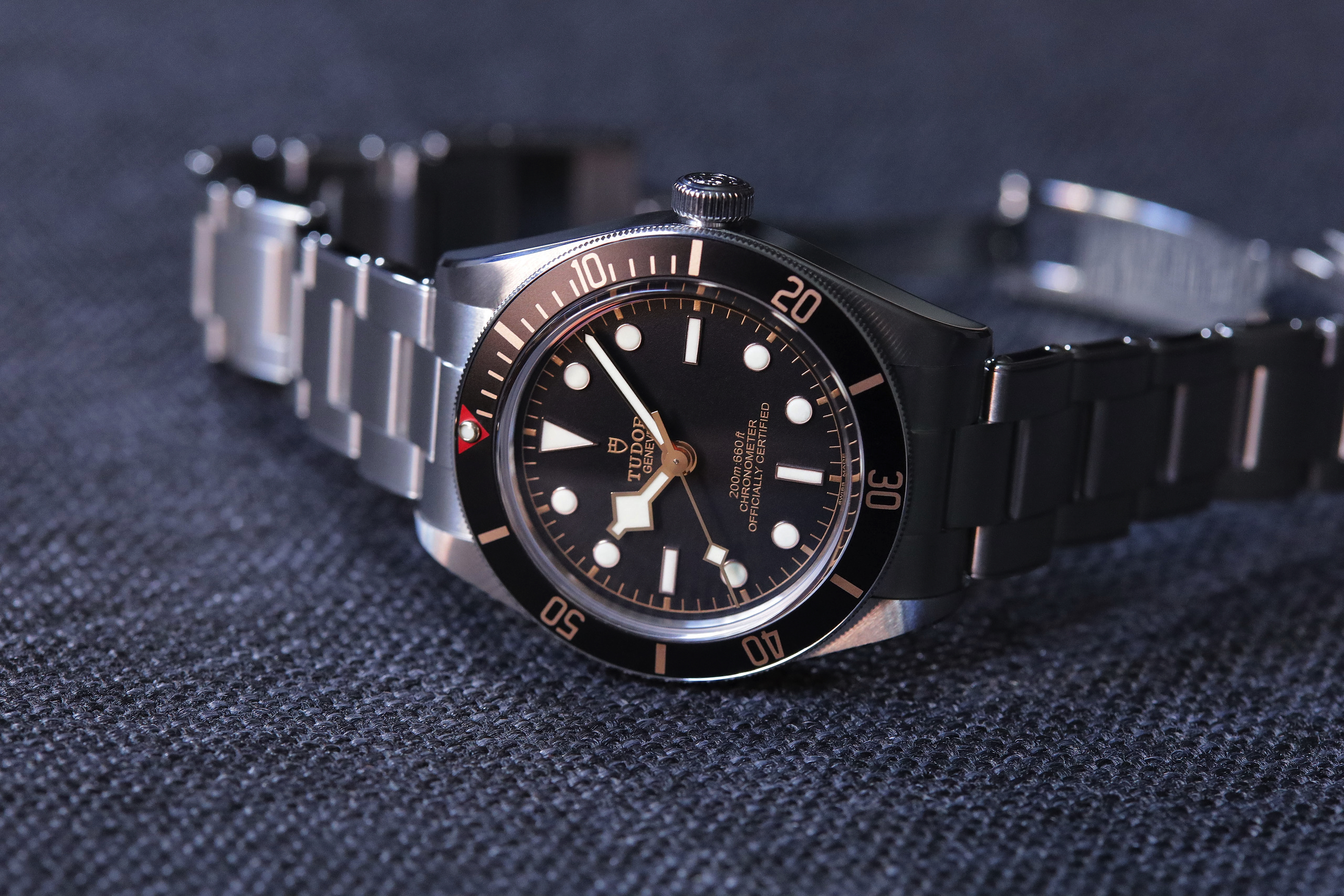 In 1946, the late founder of Rolex, Hans Wilsdorf, created Tudor Watch Company, a subsidiary of Rolex to offer high-quality timepieces at a lower price. Since 1960, the Hans Wilsdorf Foundation which Wilsdorf originally set up in 1945, has controlled Rolex and Tudor. With their stories forever interlinked, it makes sense that from a marketing perspective, the idea of purchasing a Tudor wristwatch has always been that you can attain legendary Rolex dependability at an accessible price.

Launched in 1953, the Rolex Submariner was the first diver’s watch to offer a water-resistance rating of 100 meters, which was a crucial point in the company’s history following the debut of the Oyster – dubbed as the first waterproof wristwatch – in 1926.

Shortly after the Rolex Submariner came out, seeing its success, in 1954 Tudor began offering a diver’s watch with the same “Submariner” moniker, the Tudor Oyster Prince Submariner Ref. 7922. The Tudor Submariners were, less expensive but often came in the same high-quality Oyster case like a Rolex, ensuring the reliability Rolex had already established a reputation for. Tudor continued to utilize the famous model name “Submariner” from 1954 up until 1999 when they were ultimately discontinued from the catalog.

Fast forward to today, and both Rolex and Tudor Submariners, from the 1950s until the 1990s in particular, are highly coveted among collectors. And while the Rolex Submariner is still in the catalog, the Black Bay, Tudor’s best-selling watch, has supplanted its predecessor, the Tudor Submariner.

One of the most obvious changes the Fifty-Eight brings to the Black Bay line is the introduction of a 39 mm diameter stainless steel case (the bezel is 39.5 mm and hangs over the case .5 mm). This is a good thing and the Fifty-Eight is the smallest Black Bay with a unidirectional bezel offered to date. Perhaps less obvious is the new case thickness, which has been significantly reduced compared to the full-size 41 mm Black Bays.

With a thickness of just 12 mm, compared to the standard 41 mm Black Bay that’s 14.8 mm thick (2016 and later), the new Fifty-Eight’s thinness is one of its most redeeming qualities. Prior to 2016, the 41 mm Black Bay line was powered by outsourced ETA 2824-2 movements which are substantially thinner than the MT 5602 movements powering the current 41 mm versions, and so Black Bays prior to 2016 are just 12.75 mm thick. Still, the Fifty-Eight, which uses an all-new thinner caliber MT 5402 movement, is even thinner at 12 mm, which beats both generations of full-size Black Bays in the thinness.

Overall, the Fifty-Eight is slimmer, shorter, and less wide, so it takes up less wrist space. Plus at 143.6 grams with the bracelet, it’s substantially lighter than the larger 41 mm models which weigh approximately 30 grams more.

The Fifty-Eight case measures 47. 5 mm lug-to-lug, which compared to 50.25 mm for the larger 70922 series is over 3 mm shorter across your wrist. The crown – which’s still the screw-down variety with dual gaskets – is noticeably smaller at 6.5 mm versus 7.95 mm for the 41 mm Black Bays. Even though the crown is smaller I did not find it much harder to operate the locking mechanism, set the time,  or manually wind it. And water-resistance remains the same as with the existing Black Bay line at 200 meters (or twice what’s stipulated by the minimum ISO 6425 dive watch standard). Plus, perhaps one of the best changes to the Black Bay line that premiered in the new 79030 series is that there’s no longer a colored anodized aluminum crown tube matched to the bezel. This design feature never made sense to me and I’m glad the tube is now the same steel color as the crown itself.

The case is smaller in every dimension, so naturally, the interlug width has been reduced from 22 mm to 20 mm compared to full-size Black Bays. The 22 mm width of the original Black Bays is not bad per se, but 20 mm is a less aggressive size, although this really comes down to your wrist size and preference. Bigger wrists will still likely work best with the larger Black Bays.

As shown with the vintage style faux riveted bracelet (that’s a faithful recreation of the bracelet seen on the original 1958 Big Crown), the width is 20 mm at the lugs, down to 16.5 mm for the bracelet, and 18 mm when you include the extra width of the clasp.

The clasp is not the toolless micro-adjustable type like you get with Tudor’s most professional dive watch, the Pelagos, but it’s still incredibly well made. The clasp folds over and even though there are no safety buttons the closure feels quite secure. When you lock the clasp in the closed position you see the Tudor Shield.

The stainless steel bracelet links can be removed with a small screwdriver. Despite the vintage styling the bracelet is actually quite robust and feels very well made like something you’d get from Tudor’s parent company Rolex.

Like the rest of the Black Bay dive watch collection, not including the Black Bay GMT or Black Bay Chronograph, the Black Bay Fifty-Eight has a very well made 60-click unidirectional stainless steel bezel with a matte black insert, and a subtly noticeable click at 12 o’clock to let you feel that you’ve reached the reset position.

One of the best features of the Black Bay collection, in general, is the satin-brushed top of the case and lugs, contrasted by beveled polished edges and filly polished flanks, and this watch is no different in that regard.

Like other models in the Black Bay line, Black Bay Fifty-Eight features a matte black dial inspired by models from the 1950s such as the 7924 Big Crown. And the handset, of course, comes from Snowflake models that started in 1969.

The red triangle of the rotating bezel is an identifying feature of the first generation of Tudor diver’s watches that achieved 200 meters, which started with the Big Crown and is also present on this Black Bay bezel.

As you can see in the close-up image below, the dial is punctuated by gilt writing, and the chapter ring is a closed printed track for reading minutes and seconds. This adds to the vintage aesthetic but in a way, you could argue this is tantamount to faux lume, which this timepiece does not use. The lume is actually white, with a bright green glow.

Protecting the dial is a domed sapphire crystal that gives the Tudor a nice retro feel but the crystal is also not so big as some of Tudors Submariners, which is good because at a certain point sapphire crystals can be too tall to the point of becoming cumbersome.

Barring a few references, Black Bays have traditionally come with date displays. Tudor left the date out with the Fifty-Eight and instead opted to leave the dial free of clutter. Personally, I like the omission of the date, and even though the watch looks great. However, one thing I can’t help but wonder about is what the BB58 would look like with less gold. There’s almost too much gold, in my opinion, but this far from a deal-breaker.

For the Black Bay Fifty-Eight Tudor redesigned their robust caliber MT 5602 movement 31.8 mm x 6.5 mm) to fit better within the smaller case, the result is the new caliber MT 5402 (25.6 mm x 4.6 mm) which offers both a less wide footprint that’s considerably less thick as well. This allows for a case that’s noticeably thinner, or 2.8 mm thinner than the Black Bay 41 models with in-house movements and .75 mm thinner than the original ETA-equipped Black Bays.

Despite reducing the diameter and thickness of the movement Tudor was able to maintain the same COSC certification, and the bi-directional automatic winding movement, impressively, still has a maximum 70-hour of power reserve. The movement retained the same high beat rate of 4Hz, the same 27 jewel count, and keeps the non-magnetic silicon balance spring, variable inertia balance with micro-adjustment by screw, and well as stop-seconds. And considering this movement has also met the COSC chronometer certification I presume it has lost nothing in terms of chronometry yet now benefits from a smaller footprint that’s more conducive to producing watches with more appealing case dimensions, particularly thinner cases.

This makes me wonder if Tudor might start implements thinner in-house movements in the larger models, to get the thickness back down to near what it was when the Black Bay first came out powered by ETAs. Remember once Tudor went in-house with the 41 mm versions in 2016, they gained just over 2 mm of case thickness due to the thicker movement structure. Further, the in-house movement is, of course, preferable to an ETA (25.6 mm x 4.6 mm) but not really if you have to sacrifice 2 mm of thickness being added to your watch.

The caliber MT 5402 has the same type of look and finish typical of previous manufacture movements, such as an openwork rotor that’s satin-brushed, and with bridges and mainplate that have alternate sand-blasted surfaces and laser decorations. The movement also features a sturdy balance traversing balance bridge with two points to keep the balance assembly securely in place, as you see on other Tudors and Rolexes alike.

As mentioned above, the Black Bay Fifty-Eight has great dimensions and this translates into a very comfortable timepiece on my 7″ wrist, more so than the larger 41 mm Black Bays (both ETA and in-house versions), the 39 mm case, which’s also shorter, and lighter is just more ergonomic on your wrist. Looking down your arm towards the watch you can easily see how the thinner case profile benefits you, especially if you’re wearing a long sleeve shirt, as at 12 mm, it just slides right under a cuff with ease. That said, with a t-shirt, the 41 mm Black Bay is sometimes a better choice, all depending on your wrist size and preferences.

With the Black Bay Fifty-Eight Tudor, I’d argue the Hans Wilsdorf Foundation has delivered a product that perhaps offers the closest thing to what Hans Wilsdorf initially wanted since the Tudor Submariner was discontinued in 1999 – Rolex reliability, quality, and aesthetics, for an accessible price.

Looking at images of the Black Bay Fifty-Eight it’s not easy to tell that there are any profound differences between the 39 mm and 41 mm Black Bays. Aesthetically, so much is the same, the changes really do mostly come down to the dimensions. However, in reality, the total package is very different than a 41 mm Black Bay. The watch is lighter, thinner, shorter, less wide, and weighs substantially less. The end result is a wristwatch that feels more like a Rolex than any other modern Tudor since the Tudor Submariner.

Considering at the time of this writing, the Black Bay Fifty-Eight is still rather hard to come by, and buyers are still paying a slight premium over retail in some instances, it’s pretty easy to see that Tudor has created a very popular model with the Fifty-Eight. That said, like with Rolex, this is largely controlled by how much supply Tudor creates relative to the demand.

Judging from the public’s reaction to the first Fifty-Eight, it would not be surprising if Tudor offered a new color variation or two by Baselworld 2020. Maybe even a GMT version of the Fifty-Eight if we’re lucky.